Boost the ’Cuse Is a Resounding Success

Expectations for Syracuse University’s first-ever day of giving were high, and the Orange community exceeded all of them. By all accounts, Tuesday’s Boost the ’Cuse effort was a resounding success. 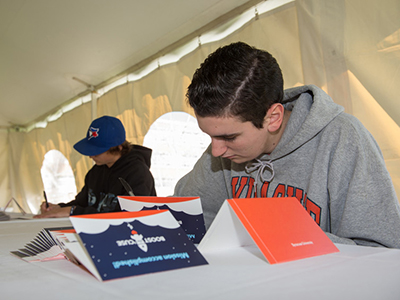 Thousands of alumni, parents, students, faculty, staff and friends of Syracuse University made gifts during SU’s 24 hours of giving to ensure future generations of SU students have access to a world-class education.

“It’s pretty incredible to see the pride the Orange family takes in giving back to current students,” says Bella Carter, ’18, a finance and political science major in the Whitman School and the Maxwell School, respectively. “I’ve been so lucky to enjoy so many great experiences here at Syracuse that were made possible by our donors. Our alumni and donor network is incredible.”

Collectively, these gifts are helping SU soar to new heights, as donors supported the part of SU they love most. Gifts came from all 50 states—and from countries as far away as Uruguay, Sweden, Oman and Japan. Everything received support, from scholarships to school and college dean’s funds to units like Syracuse University Libraries and Syracuse Athletics.

The day also served as the official launch of Class Act, the Class of 2018 Giving campaign.

“I gave back to the iSchool, where I found a community and I found a home. The immersion trips have been really helpful in guiding me towards what I want to do with my career,” says Chris Yin ’18, an information management technology major. “It’s inspirational that donors want to help students have the same great experiences at SU that they had. This makes me want to help other alumni when I graduate.”

Among the highlights of the Boost the ’Cuse campaign was a generous $200,000 gift to the Maxwell Dean’s Fund from Life Trustee Gerry Cramer ’52 and his wife, Daphna, longtime Syracuse University supporters.

The Syracuse University Alumni Club of Southern California gave $100,000 in the form of an endowed scholarship honoring the life and legacy of Olive Hall ’43, G’48, Ph.D. The scholarship, the largest ever established by an SU alumni club, will help SU-bound students from Southern California pursue their academic dreams.

Advocates—more than 200 donors who spread the word about Boost the ’Cuse while inspiring others to give back—were responsible for more than 10 percent of all gifts made online throughout the day.

Throughout Boost the ’Cuse, challenges highlighting schools, colleges and units; regions; social sharing; and more were issued to motivate donors to give back. These donor contributions channeled additional dollars to the most vital areas, including scholarships, the Annual Fund and dean’s funds.

These additional challenges ran throughout the day:

We are overwhelmed by the success of Giving Day. View our thank you video and check out the reaction to Boost the ’Cuse on social media.