Grammy Award-winning musician Steve Gorn will give a concert, “The Transformative Power of Music,” on Tuesday, Oct. 24, at 8 p.m. in 105 Life Sciences Building. His music combines the classical Indian tradition of bansuri flute with a contemporary world music sensibility. 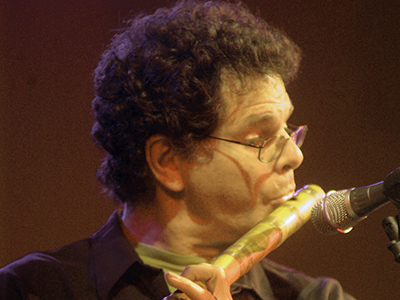 The event is sponsored by the Department of Art and Music Histories in the College of Arts and Sciences. For disability accommodations requests, please contact Sydney Hutchinson at sjhutchi@syr.edu.

Gorn, whose flute is featured on the 2011 Grammy-winning recording “Miho—Journey to the Mountain,” with the Paul Winter Consort, and the Academy Award-winning documentary film “Born into Brothels,” has performed Indian classical music and new American music on the bansuri bamboo flute, soprano saxophone and clarinet in concerts and festivals throughout the world. He is also featured on Grammy-nominated CDs: Paul Simon’s “You are the One,” Angelique Kidjo’s, “Oyo,” Silvia Nakkach/David Darling’s, “Long & Longing,” and Paul Avggerinos’“Bhakti.”

His latest recordings are “Rasika,” with tabla by Samir Chatterjee, and “Illumination,” with Nepali flutist Manose. In addition to the landmark world music recording “Asian Journal,” with Nana Vasconcelos and Badal Roy, he recorded “Wishing Well” with Richie Havens and in August 2013, he performed at “Back to the Garden: A Day of Song and Remembrance Honoring Richie Havens“ at the site of the original 1969 Woodstock Festival.