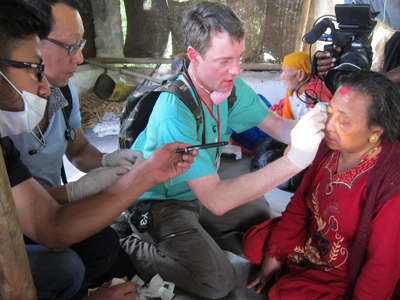 When Christopher Barley ’89 learned a 7.8 magnitude earthquake had hit Nepal in April 2015, he quickly traveled there to provide medical assistance in the region near the capital city of Kathmandu. “Little towns were just rubble,” he says. “Every building was down. People were in disarray and there was no communication. Electrical wires were down everywhere. It was devastating.”

Barley, an internist who practices in New York City, spent a few weeks helping with search and rescue efforts following the natural disaster that killed about 9,000 people and injured at least 22,000 more. The remote, rugged communities were familiar territory because he had visited the area about a dozen times with Citta, a nonprofit development and relief organization he co-founded in 1999.

In August, Barley returned for the opening of the Doctor Christopher Barley Hospital in Sindhuli, about four hours from Kathmandu. The facility, with 20 beds and an emergency room, is the only hospital serving about 50,000 people.

The earthquake “affected a lot of our employees and friends,” Barley says. “We may employ one person, but they have a family of 20. They may have a home that was ruined. Electricity was out forever. We knew no one was going to do much for our people. This is why we wanted to build a hospital there.” 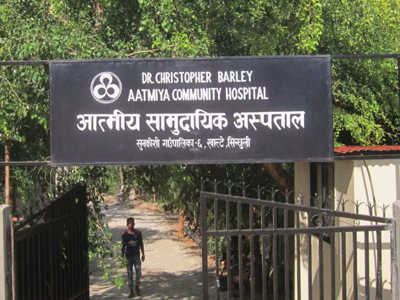 “It might as well be 5,000 miles if they have no money, which they don’t,” Barley says. “There are a lot of injuries because they are working the fields and the mountains by hand. We are the front line for the terrible traumas that happen on the highway. There are massive cliffs, so there are a fair amount of accidents.”

About 300 people attended a free clinic a week before the hospital opened. “If they’re critically ill, we will transport them a couple hours away,” Barley says. The Nepali people endure “every infectious disease you would expect in semi-tropical, developing countries,” he explains. “They deal with poor water supplies, sewage, infectious diseases—things we don’t see in the West.”

Although the people work hard, many smoke and their diets “are not particularly healthy,” Barley says. “Infant and child mortality are high. They have diabetes, high cholesterol, heart disease, strokes—whatever we have times 10.”

The hospital complex includes housing for 50-plus staff members. “Our goal is to give the community health care and to empower the local women because they play such a strong role in the family,” Barley says.

The conditions in Sindhulu are similar to those in other areas where Citta works. The organization’s projects include a hospital and school in Odisha, one of the poorest states in India; a girls school in the Thar desert region northwest of Jaisalmer, Rajasthan, India; and a women’s center in the city of Bhaktapur, Nepal.

“Without education, no one is going to go anywhere or do anything,” Barley says. “People have dreams and should have the ability to fulfill them as I do.” 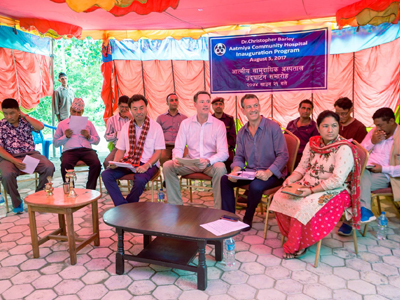 Opening Ceremonies for the Doctor Christopher Barley Hospital in Sindhuli

Barley grew up in Canastota, a Madison County village about 25 miles east of Syracuse University. “I grew up dreaming of being an Orangeman,” he says. “I went to Jim Boeheim’s summer basketball camps.”

He majored in biology in the College of Arts and Sciences and took religion courses that spurred interest in Buddhism and Hinduism. He spent his sophomore fall semester in London. “I traveled every weekend and loved it,” he recalls.

While attending George Washington University School of Medicine in Washington, D.C., Barley and some friends scraped together the money to visit India. In a poor, rural part of the country, he worked with a physician who had a hospital connected to his home. That spurred his interest in health care policy and international medicine.

After starting a career in private practice, Barley joined international medical missions. “We would be part of a team taking care of people in all parts of the world,” he says. He and Michael Daube, a New York City artist, co-founded Citta to build clinics and schools in India; Daube serves as executive director and Barley is board president.

“We work in the poorest part of India,” Barley says. “We eventually convinced the government to build roads and bring in electricity.” He typically visits each of Citta’s projects every year, meeting local politicians. He also spends a lot of time fundraising for the organization. 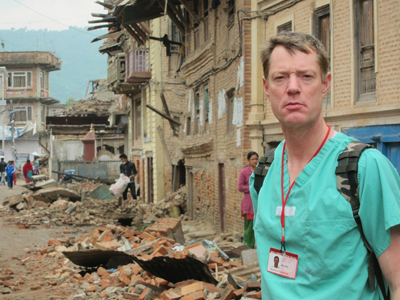 After the devastating 2015 earthquake, Barley traveled back to Nepal to help provide medical assistance to injured.

The nonprofit’s name, Citta, is a Sanskrit word that refers to heart and mind and the interdependence of thoughts and emotions.

“Whether a doctor takes care of rich or poor patients, when a person is sick or dying or being born, all you have is the heart and soul,” Barley says. “That’s the commonality of all people. It just worked out that I take care of some of the richest people and some of the poorest. It keeps me in touch with my own heart and soul.”

Barley calls the people in Sindhulu “remarkable and generous and inspirational.” The first woman who gave birth in the new hospital wanted to name her daughter Christopher in his honor. “I lost my mom last year,” Barley says. “I suggested they name her after my mom, Elizabeth. They call her Eliza.”