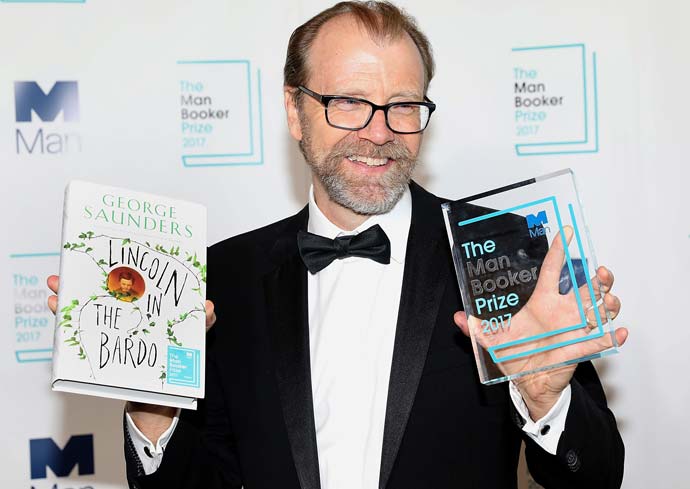 George Saunders accepts the Man Booker Prize for his first novel, “Lincoln in the Bardo.”

George Saunders, professor of English in Syracuse University’s College of Arts and Sciences, has won the 2017 Man Booker Prize, one of the world’s most distinguished literary awards, for his first novel, “Lincoln in the Bardo” (Random House/Bloomsbury, 2017).

Saunders’ win was announced by Lola Young, Baroness Young of Hornsey, at a dinner Tuesday evening at London’s Guildhall. Her Royal Highness the Duchess of Cornwall presented a trophy to Saunders. He was also presented with a £50,000 (about $66,000) check. The event was broadcast live on the BBC News Channel.

Royal Mail is issuing a congratulatory postmark that will be applied to millions of items of stamped mail across Great Britain on Wednesday, Oct. 18, and Friday, Oct. 20, that will say “Congratulations to George Saunders, winner of the 2017 Man Booker Prize.”

“Bardo” hit bookstore shelves last February to wide critical acclaim, and it debuted at No. 1 on The New York Times Bestseller List. The first full-length work of fiction by the acclaimed short story writer, the book combines actual historical quotes with Saunders-created anecdotes to describe the overwhelming grief of President Abraham Lincoln following the death of his beloved son Willie amid the backdrop of the height of the Civil War.

“The form and style of this utterly original novel, reveals a witty, intelligent, and deeply moving narrative,” says Chair of Judges Young. “This tale of the haunting and haunted souls in the afterlife of Abraham Lincoln’s young son paradoxically creates a vivid and lively evocation of the characters that populate this other world. ‘Lincoln in the Bardo’ is both rooted in, and plays with history, and explores the meaning and experience of empathy.”

The book is being adapted to film by Saunders and two good friends—actor/producers Nick Offerman and Megan Mullalley.

Saunders has won numerous awards, including a MacArthur Fellowship, a Guggenheim Fellowship, three National Magazine Awards for fiction, the Story Prize, the PEN/Malamud Award, the Folio Prize and the World Fantasy Award for Best Short Fiction.

Among his most recent activities, along with an extensive “Bardo” book tour, Saunders completed the TV screenplay adaptation of his short story “Sea Oak” for Amazon. The pilot, starring Glenn Close and directed by Hiro Murai (“Atlanta”), was shot this past summer in Yonkers and Brooklyn.