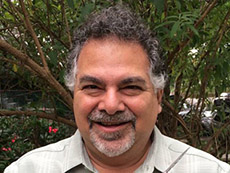 Shahin placed second in the Best Food Column category of the Association of Food Journalists’ 2017 awards competition for “MLK’s booth at his go-to barbecue joint became a memorial. Then it disappeared.” The piece was part of Shahin’s regular food column for The Washington Post, Smoke Signals.

Smoke Signals was also a finalist in the International Association of Culinary Professionals’ 2017 Food Writing Awards competition, in the Food-focused column category.

Shahin is an accomplished magazine writer and editor who has held positions at the Austin American-Statesman and the Austin Chronicle, where he was the first politics editor. His work has appeared in The New York Times, GQ, Columbia Journalism Review, Texas Monthly, Southern Living, Spin, Parents, Parenting, Esquire.com, Bon Appetit.com and NPR’s TheSalt.com, among others. He joined the Newhouse faculty in 2011.