Dollar Day for the United Way returns to the Carrier Dome Friday, Oct. 13, prior to the men’s football game against Clemson. 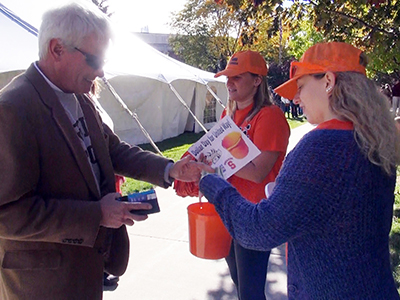 A gamegoer contributes to the United Way during a previous Dollar Day at the Dome.

Prior to tipoff at 7 p.m., students representing Syracuse University’s fraternities and sororities will solicit fans for donations to the United Way. The students will stand outside all Dome entrances, at different spots around campus and in the parking lots wearing orange United Way visors and holding orange buckets. Fans can make a cash donation or buy an SU rally towel for $5.

Patrons who donate will be investing in the 88 local programs and services funded by the United Way of Central New York.

Anthony Callisto, senior vice president and chief law enforcement officer, and Bea González, vice president for community engagement and special assistant to the Chancellor, are co-chairing the 2017 Syracuse University employee United Way campaign, for which the goal is $250,000. They lead a cross-campus committee of employees who are helping to publicize the campaign and communicate the benefits of participation.

This fall marks the University’s 46th annual employee-led campaign. Employees are encouraged to make a gift of any amount, positioning the University as a game changer in the community, supporting 33 agencies and 88 local programs.

The United Way is the only nonprofit the University partners with as “One University,” with payroll deduction as an option for giving. Continuing for the third year in a row, employees can make a pledge anytime through MySlice.

“The United Way is a trusted partner. Many of the agencies they support would not be able to survive without the funding they receive from the United Way” says González. “This is why workplace campaigns, like the one here at Syracuse University, are vital to our community.”

A pledge card, with a message from Chancellor Kent Syverud and Dr. Ruth Chen and featuring options for payroll deduction, will be sent to all faculty and staff members soon.

“Last year, Syracuse University employees set a record with their donations and we collected $240,000 for the United Way,” says Callisto. “Help us to set a record again this year!”

The United Way supports agencies and programs that have met strict criteria for financial management and stewardship of donor dollars.

“Our goal is 100 percent participation. We invite employees who haven’t ever participated in the campaign to consider making a pledge of any amount and know that your dollars donated are carefully invested back into our community” says Callisto.

For more information about the United Way, its funded agencies and its impact on the community, visit its website at unitedway-cny.org.

This is the 46th year Syracuse University employees have conducted a campus-based fundraising campaign for the United Way. Dollar Day has been a part of that campaign for 21 years, giving students an opportunity to participate in the staff-led campaign.

“Students will be out 90 minutes before tip-off, stationed at key areas around campus, collecting donations from fans,” explains Callisto. “We encourage fans to look for them, buy a rally towel or make a donation in one of the orange buckets and help us help our community.”

“If each fan gave just a dollar, imagine what we could do for our community at just one game,” says Bea González, 2017-18 campaign co-chair. “It’s the concept that can have a tremendous, direct impact on the local programs funded by the United Way of Central New York.”

Concession stands, merchants and Club 44 are also equipped to accept fan donations electronically with each transaction, cash or credit.