A collaborative campuswide effort, combined with the design prowess of a School of Architecture student, has led to the unveiling of Syracuse University’s new all-gender restroom signage. 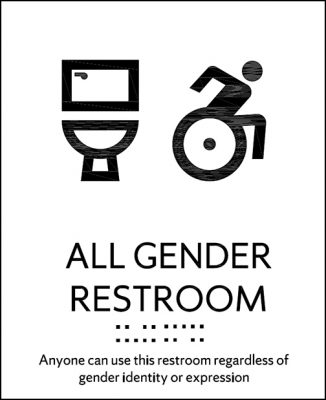 The new restroom signage shows a toilet and the active accessible icon. Below, the text reads, “ALL
GENDER RESTROOM” followed by a second line of Braille text. A third line reads, ”Anyone can use
this restroom regardless of gender identity or expression.”

For months, the Restroom Signage Committee engaged the campus community in conversations about identifying and conceptualizing a truly inclusive approach to restroom signage. As a result of that campus engagement and with the help of Samuel Dye ’18, a senior in the School of Architecture, the University is now prepared to install new uniform signage to identify all-gender, accessible, single-occupancy restrooms across campus.

“After much research, discussion and community input, the restroom signage committee is excited to share the culmination of this important and collaborative effort with the community,” says Bea Gonzalez, vice president for community engagement and chair of the committee.

Dye, who spent this past summer interning in the Office of Campus Planning, Design and Construction, played a critical role in bringing a design to life that reflects the input and philosophy of the Syracuse University campus community. Dye says being a part of this process was a valuable educational opportunity. More importantly, he says, he is proud to have worked on an initiative with such significant meaning to the campus community.

“I wanted to make an impact and contribute to the university’s community,” says Dye. “It’s rewarding to know that your hard work can be reflected in a well-thought-out and collaborative design.”

The Restroom Signage Committee, which includes representatives from the Office of Residence Life; the Lesbian, Gay, Bisexual, and Transgender (LGBT) Resource Center; and Campus Planning, Design and Construction, worked for several months to prepare—in partnership with Pentagram, an international design firm—and present several conceptual designs to the campus community for its review and feedback.

Following several campuswide engagement sessions and a voting period on the designs, the Restroom Signage Committee collaborated with Pentagram and Dye to edit the designs to reflect the community’s feedback. In addition to showing imagery that indicates the restroom is usable by all genders and is accessible, the final design says: “Anyone can use this restroom regardless of gender identity or expression.”

“It was clear as we concluded the campuswide voting last May and reviewed the responses that there was an opportunity to improve the signage to better describe the facilities within the restrooms, as well as reflect our values of inclusion and accessibility,” says Tiffany Gray, director of the LGBT Resource Center. “We appreciate the constructive feedback the community provided throughout this process and believe the final design is more reflective of our campus community’s commitment to inclusion.”

To date, there are more than 700 single-occupancy, all-gender restrooms on campus.  The signs will be installed at each of these restrooms starting in late fall.