Amanda Chou ’19 has been selected to participate in the Clinton Global Initiative University (CGI U) in Boston.  CGI U was established in 2007 to engage the next generation of leaders on college campuses around the world. It is a global conference that brings together students, university representatives topic experts, and celebrities to discuss and develop innovative solutions to pressing global such challenges as education, environment and climate change, peace and human rights, poverty alleviation and public health. The event will take place this weekend at Northeastern University. 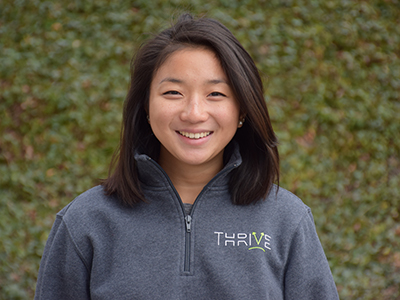 Chou is pursuing a double major in public relations at the Newhouse School of Public Communications and political science at the Maxwell School of Citizenship and Public Affairs. She is a founding member and chief marketing officer of Thrive Projects, and president of the campus student organization, Thrive @ SU.  Both are based at the Blackstone LaunchPad in Bird Library.

Thrive Projects Inc. is a nonprofit organization founded in 2016 by three Syracuse University alumni who believed in becoming “global citizens” and launched a venture to educate and empower distressed communities in places like Nepal and Haiti. The venture won first prize in the social enterprise division in the 2017 New York State Business Plan Competition. Thrive @ SU, a campus-based organization that is part of SA, takes Thrive’s philosophy of sustainable, community-based solutions and applies it to the local Syracuse community, partnering with organizations like Interfaith Works.

Chou was part of the Thrive team that represented Syracuse University earlier this year at the prestigious Hult Prize competition. The Hult Prize is a crowdsourced platform for social good, named one of the top five ideas changing the world by Time magazine. It is aimed at launching disruptive and catalytic social ventures to solve the planet’s most pressing challenges.

Beyond her work with Thrive, Chou was the first Blackstone LaunchPad Global Media Fellow, selected in January 2017.  In that role, she has focused on student outreach, communications and engagement, and is building a network of Syracuse students interested in social entrepreneurship.