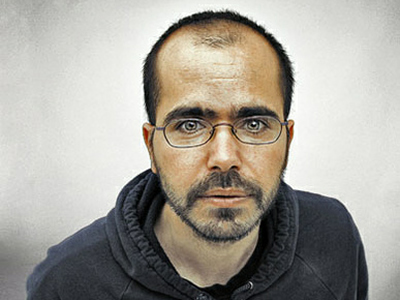 On Thursday, Oct. 12, Bilal will give a presentation titled “Performing Change: Diaspora and Belonging” from 5-6:30 p.m. in the Peter Graham Scholarly Commons, 114 Bird Library. Bilal will discuss how he uses online performance and interactive works to address issues of identity, exile and politics.

The following day, he will lead a small-group discussion from 10-11:30 a.m. in 304 Tolley Humanities Building. Titled “On Art and Resistance,” the program will focus on the relevance and role of artistic expression in relation to war trauma, violence and diasporic belonging.

Both events are free and open to the public; however, the event on Friday, Oct. 13, requires registration. To RSVP, contact Amy Kallander, associate professor of Middle East history in the Maxwell School, at akalland@maxwell.syr.edu.

More information about Syracuse Symposium, organized by the Humanities Center in the College of Arts and Sciences (A&S), is available at humcenter.syr.edu.

“Waafa Bilal believes artists should be more than educators; they should be provocateurs,” says Vivian May, director of the Humanities Center and professor of women’s and gender studies in A&S. “He has produced a body of work that is both controversial and illuminating. Many of his projects utilize robotics, the Internet or photographic mobile mapping to provoke a dialogue about international politics and internal dynamics.”

Bilal is an associate professor of photography and imaging at New York University’s Tisch School of the Arts. Much of his artwork draws on the experience of fleeing his homeland in 1991, following the Gulf War and taking up residence in the United States a year later.

He also has been an outspoken critic of the Iraq War, an antipathy that deepened in 2004 when an unmanned U.S. Predator drone killed his brother at a security checkpoint.

As a result, Bilal believes he inhabits parallel worlds. One is his physical home in the “comfort zone” of the United States; the other is his consciousness of the “conflict zone” in Iraq.

“Bilal’s art points to the role that the public plays in constructing, perpetuating and resisting these seemingly separate zones, or spaces,” says Carol Fadda, who is co-organizing the event with Kallander.

An associate professor of English in A&S, Fadda teaches and writes about Bilal’s artwork. This semester, she is using his book “Shoot an Iraqi: Art, Life and Resistance under the Gun” (City Lights Publishers, 2008) as part of her course “Gender, Violence and Sexualities in the ‘War on Terror.'”

“After his brother was killed, Wafaa Bilal began using his art to expose those in what he refers to as the ‘comfort zone’ with the realities of life in the ‘conflict zone,’ with an understanding, however, that not everyone in the U.S. is or can be a part of this ‘comfort zone,’” she says. 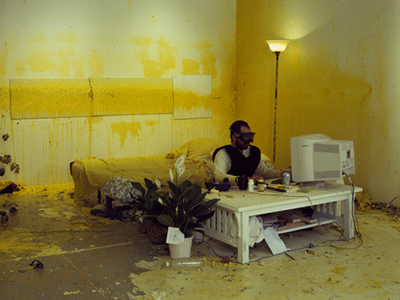 The Chicago Tribune hailed “Domestic Tension” (above) as a “sharp work of political art.”

Bilal responded to his brother’s death with “Domestic Tension,” a 2007 interactive performance piece that thrust him into the national spotlight. For a month, Bilal confined himself to a prison cell-sized room in a Chicago art gallery, where virtual users shot paintballs at him 24 hours a day.

Bilal’s unsettling take on the morality and violence of the Iraq War prompted the Chicago Tribune to name him Artist of the Year, calling his show “one of the sharpest works of political art … seen in a long time.”

In 2010, Bilal found other ways to use his body as the medium. For one project, he installed a thumb-sized camera into the back of his head. Every minute for a year, the camera took snapshots of his activities, from the sublime to the mundane. Another project saw him tattooing an Iraqi map onto his back, using dots to represent U.S. and Iraqi casualties. “For the Iraqis, he used invisible ink, which was seen only under a black light,” May says.

Bilal’s latest project, “168:01,” is an austere white library that remembers the cultural losses Iraq has endured throughout history, while serving as a platform for potential rebirth. The installation positions viewers as potential donors, whose contributions benefit the University of Baghdad’s fine arts college, which lost more than 70,000 books during the Iraq War.

“The installation venerates Iraq’s rich cultural heritage,” says Kallander, whose colleague Boryana Rosa, assistant professor of art video and transmedia in the College of Visual and Performing Arts, is trying to bring “168:01” to the Community Folk Art Center next year.

Kallander considers Bilal’s work timely, given the recent spike in violence and prejudice against Iraqis and Muslims. According to the M.I.T. Center for International Studies, the number of people displaced by the Iraq War, internally (within Iraq) and externally (mainly in Jordan and Syria), ranges from 3.5 million to 5 million. Complicating displacement are attempts to ban immigrants and refugees from predominantly Muslim countries in the Middle East.

These issues permeat a course Kallander teaches called “Iraq: Modern Nation to U.S. Occupation.” She thinks Bilal’s visit will help bring the material to life. “He is part of a growing number of Iraqis who turn art into a form of everyday resistance. His work rejects the dehumanizing nature of dominant stereotypes about Iraq and the Middle East, in general,” Kallander adds.

Fadda marvels at how Bilal engages with, and draws inspiration from, the “rich cultural and intellectual heritage” of Iraqi, Arab and Muslim history. She points out, however, that his art moves beyond “humanizing frameworks” that usually affirm the “us-and-them” binary.

“He pushes viewers to address the violence of U.S. wars abroad, specifically in the Arab world, and the effects of these wars on the everyday lives of Arabs and Muslims,” Fadda says.

Two years ago, Bilal created “Canto III,” which explored the extremes people go to honor despotic rulers—in this case, Saddam Hussein. Bilal invited a group of U.S. veterans who served in Iraq to assist with the artwork’s fabrication, for which they were paid minimum wage. The work, May says, raised awareness of the neglect that veterans face upon returning home from war. 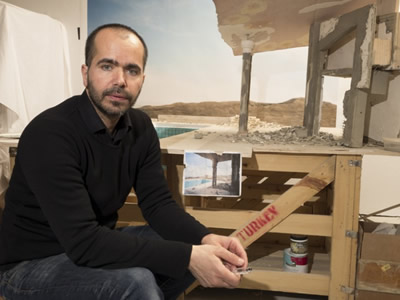 Wafaa Bilal at home in his studio

Bilal’s artwork resides in the permanent collections of the Los Angeles County Museum of Art, the Museum of Contemporary Photography in Chicago and Mathaf: Arab Museum of Modern Art in Doha (Qatar).