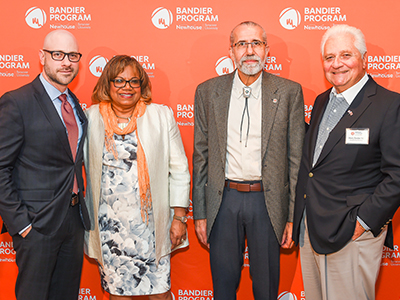 At the event, left to right, are Bill Werde, Lorraine Branham David Rezak and Marty Bandier.

Speaking at the event, Bandier—who founded the program at Syracuse University in 2006—said, “Of all the things I have accomplished in my career, the Bandier Program is one of my proudest.” Bandier also noted his pleasure at the program’s move to Newhouse, which he called “one of the most prestigious and esteemed communications schools in the country.”

Bandier thanked Rezak for his years of leadership in the program and presented him with a gift.

In Rezak’s honor, Newhouse Dean Lorraine Branham announced the establishment of the David M. Rezak Music Business Lecture Series Fund at the Newhouse School. The fund will support campus visits from executives and successful Bandier Program alumni, allowing students to learn about the state of the industry “in real time,” according to Branham. “What better way to honor founding director David Rezak and ensure his legacy with the program,” she said. Gifts to support lecture series may be made online.

Andrew Beyda ’11 paid tribute to Rezak on behalf of the Bandier Program Alumni Association, saying, “David Rezak shows you what you are capable of before you can even see it yourself.”

In his remarks, Werde also lauded Rezak’s leadership and praised the program. “Bandier is the single best music industry program in the world, and there’s no place it belongs more than Newhouse.”

Rezak said he was happy to pass the torch to Werde, whom he called “a true visionary.” He offered advice to guests, including dozens of his former students: “Do well so you can do good.”

To make a gift to the Rezak Lecture Series, visit the online giving page or contact Carol Satchwell at 315.443.5281 or cmsatchw@syr.edu.