Looking back, Alexei Abrahams ’08 sees a clear line from his family history to his career as an economist studying the Israel-Palestine conflict. He grew up in Ontario and Nova Scotia, but he lived in South Africa from the time he was 9 until he was 15. His father, who is biracial, grew up in South African under apartheid, the system of racial segregation under white minority rule. He became an academic and an anti-apartheid activist and lived in exile in Canada for 32 years. 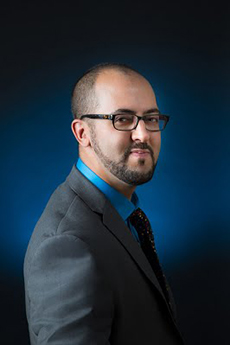 The family moved to South Africa after apartheid ended in 1994 and President Nelson Mandela invited expatriates to return and help rebuild the country. “From my father’s experience and history, I felt a kind solidarity with the Palestinian struggle,” says Abrahams, a research fellow at Princeton University’s Niehaus Center for Globalization and Governance (Woodrow Wilson School).

Abrahams, a dual math and economics major at Syracuse, was previously a research fellow at the Middle East Initiative (Harvard Kennedy School’s Belfer Center) and the University of California at San Diego’s Institute of Global Conflict and Cooperation. He also is a consultant for the World Bank and Asian Development Bank.

Syracuse’s offer of a Coronat scholarship cemented his college choice. Abrahams, who finished high school in St. Louis, was among the first nine Coronat scholars, highly accomplished, first-year students planning to major in the liberal arts.

The Coronat program was established by the University and the College of Arts and Sciences in 2004. The award includes full scholarships as well as financial support for study abroad, summer study, research, volunteer work and other opportunities.

Abrahams remembers annual retreats at Minnowbrook, the University’s conference center on Blue Mt. Lake in the Adirondacks. He also remembers a trip to Ottawa and other Coronat activities. “Some of those other scholars became long-term friends,” he says.

He describes a monthlong visit to the occupied Palestinian territory of the West Bank the summer before his senior year as “pretty influential.” He studied Arabic, volunteered and met NGO representatives, government officials and activists.

That summer trip spurred him to focus on Palestinian issues for his senior honors thesis. He credits his advisor and economics professor Don Dutkowsky and math professor Dan Zacharia with helping him focus his scholarly interests.

Zacharia, who provided him an independent study program in algebra, suggested he continue at Syracuse as a graduate student in math. “I love math,” Abrahams says. “But I knew I needed something I thought was making a tangible impact in the here and now that was still mathematical.”

Doctoral programs in economics offered the right balance, and he ended up at Brown University, where he received his Ph.D. in 2015. Abrahams was a graduate student as the Arab Spring was unfolding in the Middle East and North Africa. “With my background visiting Palestine and knowing some Arabic, I realized this was an opportunity,” he says.

The Coronat program allowed him to take his time finding his career path. “The Coronat frees you to try all these different things,” he says. “You’re not constantly anxious about debt.”

The liberal arts curriculum also let him “diversify and try things.” “My first semester, I was co-enrolled in engineering school,” he says. “I did just fine in those courses, but I wanted some more perspective and abstraction.”

One highlight was working with Ernesto V. Garcia, then the Alan and Anita Sutton Distinguished Postdoctoral Faculty Fellow, on an independent study in Western philosophy. “I had been exposed to philosophy, but I needed to hear it from the beginning,” he says. “I needed a perspective to situate what I was doing.”

Abrahams’ experience illustrates the goal of the Coronat Scholars Program, says director Susan S. Wadley. “When the program was founded, we sought to recruit the very best graduating high school seniors through special invitations to apply to Syracuse with additional essays and a two- day intensive interview process,” she explains.

“Alexei and his classmates, and those in the 10 graduating classes thus far, have proven the value of the program,” she says. “We truly value their time on campus and their later accomplishments.”

Abrahams’ dissertation studied the effects of Israeli army checkpoints inside the West Bank on the employment of Palestinians. He lived in Ramallah about a year, negotiating access to census data to analyze.

“The truth is complicated,” he says. “The numbers do not cleanly support one narrative or another. When I began it, Palestinians told me for sure you’ll find the checkpoints reduced employment.” His research, though, found that the Palestinians who were commuting “were indeed victimized by the checkpoints, but the ones on the other side benefited.”

His current research uses the United Nations’ daily reports of rocket attacks, airstrikes, ground incursions and other events relevant to the conflict in the West Bank. “We’ve shown pretty convincingly the conflict is not really a tit-for-tat cycle of violence,” he says. “We’re showing that the conflict is episodic. The violence will not end today if the Israelis stop shooting. The violence is motivated by other stuff.”

The point of research, he says, should be to make the world a better place. “The purpose of gaining knowledge is not to get a nice job or a fancy house or season tickets for basketball,” he says. “Academic research in the social sciences should be motivated by a desire to change things for the better.”