Maria Russell, professor of public relations and director of executive education in the Newhouse School, was presented with the Public Relations Society of America (PRSA)’s Patrick Jackson Award for significant contributions in advancing the professional development of its members. The award was presented Oct. 8 at the PRSA 2017 International Conference in Boston. 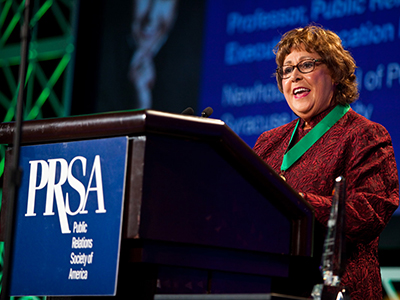 Russell is a longtime member of PRSA who has helped the society expand and enhance its educational offerings, including its movement into online programming and the MBA Initiative.

“Maria deservedly belongs in this esteemed group of honorees for her many talents and achievements, but mostly for her ability to inspire others to higher learning. She has been an example for many of us, myself included, to achieve at the highest level,” said PRSA 2017 National Chair Jane Dvorak. “PRSA is honored to recognize Maria with this well-deserved award as she models a deep-felt commitment to public relations, education and the importance of lifelong learning.”

Russell co-directs the W20 Group Center for Social Commerce at Newhouse. Previously, she was chair of the PR department for four terms, leading the creation of the school’s first distance-learning master’s degree in communications management in 1995. She has been a faculty member for 30 years and conducts professional development programs across the U.S. and in Canada and Brazil. In 2017, colleagues and alumnae created a graduate scholarship in her name.