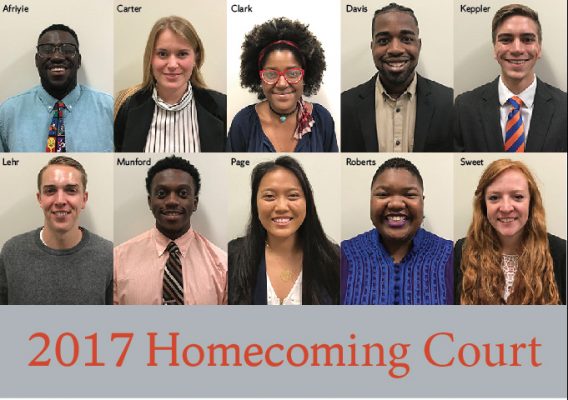 A longstanding University tradition, the Homecoming Court is comprised of seniors who represent Orange spirit in their academic, co-curricular and community involvement. Campus community members with a valid NetID can cast their vote for the Orange Central Homecoming King and Queen via the online Homecoming Court ballot. Homecoming Court Royalty will be crowned at the University Union and Traditions Commission Homecoming comedy show on Saturday, Oct. 7, in Goldstein Auditorium.

Obi Afriyie
Major: Cultural Foundations of Education
Hometown: Chester, New York
“Life is crazy.  Came to ’Cuse looking for an education, ended up finding a home through being the parliamentarian of Student Association, a senior intern for Admissions, founding the Syracuse Students Teaching Healthy Habits program, being a U100 tour guide, and most importantly, eating at Faculty every day.  Get involved and make a difference.”

Bella Carter
Major: Finance and Political Science
Hometown: Bakersfield, Vermont
“As a resident advisor, volunteer, peer mentor and U100 tour guide, everything that I am today is due to Syracuse University. Each activity I am involved with is because I believe in making our campus stronger. Over the past four years, Syracuse has evolved from a school into a home; as Homecoming Queen, I want to help all students feel that way.”

Darriea Clark
Major: Magazine Journalism
Hometown: Atlanta
“Darriea is a magazine major from Atlanta. She’s the editor in chief of the yearbook and host of ‘unblushing’ on WERW Radio. She’s a proud Orange who is involved on and off campus. Her favorite memories of SU include interning at NYLON magazine, performing in an Indian folk opera and singing lead in the Kanye West cover band ‘Some of the Lights.’”

Malcolm-Ali Davis
Major: Information Management & Technology
Hometown: Galloway, New Jersey
“Malcolm is an information management and technology major from the Jersey Shore, as well as an actor and singer that has performed internationally. As a member of Student Alumni Council, Student Advisory Council and a peer advisor for the iSchool, Malcolm has represented and advocated for all students, and as Homecoming King, he will inspire others to do the same!”

Charles Keppler
Majors: Aerospace Engineering, Physics and Applied Mathematics
Hometown: Bennington, Vermont
“There once was a man from Vermont,
To ’Cuse he went for a jaunt.
Engineering, physics, and math
Were this gentleman’s chosen path.
He dabbled in other things too –
U100 and Otto Tunes.
He always shared peace and love,
And reached for the stars above.
‘I’m going to space one day!’
Smiling, he’d proudly say
Vote Charles for King today!”

Michael Lehr
Major: Broadcast & Digital Journalism
Hometown: Chatham, New Jersey
“I’m a broadcast journalism student and spread myself all across campus. I spend most of my time covering Syracuse sports, but have been around all kinds of organizations. I thrive on sharing my energy and personality with the people around me. I’m definitely a first name, last name, kind of guy and love to walk down the Quad and hear ‘Michael Lehr!’”

Brandyn Munford
Major: Civil Engineering
Hometown and State: Woodbridge, Virginia
“Coming from the small suburbs of Virginia, I am truly blessed to be a part of the Orange family. Whether it is engaging with the community through my presidency of Alpha Phi Alpha, Fraternity, Inc., mentoring in the city school district or engaging the campus with Black Reign, my versatility makes me a worthy candidate to serve as your King.”

Jacqueline Page
Majors: International Relations and Television, Radio, and Film
Hometown: Potomac, Maryland
“Jacqueline has traveled to over 25 countries and six continents during her time at Syracuse, but none have matched the Orange home she loves. As an ROTC cadet, Remembrance Scholar, brother of Delta Kappa Alpha and club lacrosse player, Jacqueline thrives off making meaningful connections in the SU community.”