Department of Drama presents ‘Crazy For You’

The Department of Drama presents “Crazy For You” from the legendary songbook of George and Ira Gershwin. This Tony Award-winning musical takes a passion for theater and the desire to be loved and infuses them with the toe-tapping stylings of the Gershwin brothers. “Crazy For You” opens on Oct. 7 in the Storch Theatre at the Syracuse Stage/SU Drama Complex, 820 E. Genesee St. A preview performance is on Oct. 6. 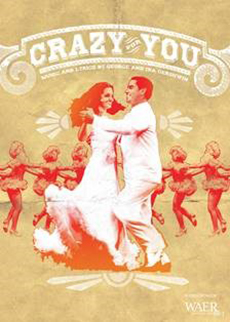 Ludwig’s “Crazy For You” crafts a zany love story spanning the glitz and glamour of New York City and the rustic simplicity of Deadrock, Nevada. Bobby Child loves theater more than anything, but he can’t seem to get his foot in the door with famed producer Bela Zangler. Bobby’s overbearing mother is insistent that he focus on his more responsible bank job. When his mother sends him to Deadrock to foreclose on a theater, Bobby pulls out all of the stops in an attempt to save that theater (and win over his one true love, Polly). To do this, he mounts an (at first) unsuccessful production to pay the mortgage, which incidentally manages to lay the foundation for career successes and true love.

Long after the deaths of George and Ira Gershwin, Ludwig revitalized some of the best songs ever written for Broadway. Pairing the Gershwins’ greatest hits with the lively choreography that brought legendary choreographer Susan Stroman her first of four Tony Awards for Best Choreography, “Crazy For You” ran on Broadway for four years and 1,622 performances.

The New York Times credits “Crazy For You” as the American show that grabbed Broadway back from British spectacles such as “The Phantom of the Opera” and “Les Miserables.” The hysterical script and the everlasting music of the Gershwin brothers give the show wide appeal.

Director and choreographer Brian J. Marcum, assistant professor in the Department of Drama, brings with him an expansive Broadway dancing career. He has performed in “The Gershwins’ Fascinating Rhythm,” “Saturday Night Fever,” “42nd Street,” “The Boy from Oz” starring Hugh Jackman, “The Drowsy Chaperone” and “Spamalot.” Marcum was also the associate choreographer for the Broadway musical “Elf.”

Marcum’s choreography will pay homage to Stroman’s choreography while also showcasing Marcum’s personal style. Marcum will utilize two six-person choruses of Follies Girls and Cowboys to round out his cast of more than 20.

“Our hope is that we can take audiences away from whatever it is they’re dealing with and make them forget about the bad stuff in the world for a moment,” Marcum says. “We hope to be able to give them that gift, and to have them leave uplifted and joyous.”