The Syracuse University Alumni Association Board of Directors has announced the addition of four new directors. Effective July 1, Jennifer Dandrea ’05, Karen (Au) Frank ’03, Melissa Richards-Person ’89 and Jason Yaley ’05, G’06 are directors on the SUAA Board. 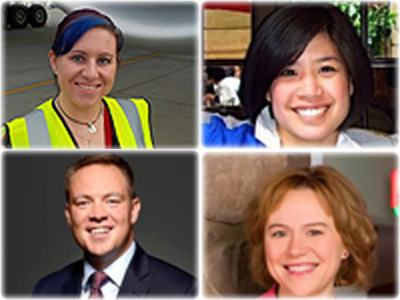 The SUAA Board of Directors guides the Syracuse University Alumni Association in establishing priorities for alumni engagement consistent with University goals. Board members have distinguished themselves as leaders within the alumni community while demonstrating a personal commitment to the University. They are ambassadors who have great knowledge of SU’s history, traditions and activities.

The board’s mission is to create an environment in which alumni, former students, parents, students and friends become and stay connected to the University and support it with their work, wisdom and wealth. The term of service is two years, and board members can serve two terms. Committees within the board structure include: Awards, Clubs, Nominating, Philanthropy, Diversity and Inclusion, Generation Orange, and Veterans and Military Engagement.

Frank has been with PricewaterhouseCoopers for more than a decade, currently in the role of global change management director. She has been a member of Big Apple Orange (the Syracuse University Alumni Club of New York City) and the Syracuse University Alumni Club of Northern New Jersey since 2008, including serving as president of the New York City club. Frank, who lives in Hoboken, New Jersey, is on the advisory board for the Friends of Leadership & Public Service High School.

Yaley is assistant vice president at Aerospace Industries Association. He created the Orange Around the World service project at Syracuse University in 2006, sending care packages to alumni serving in the armed services. Yaley was also involved with the Office of Alumni Engagement as a student and was a member of Sour Sitrus Society. In 2016, Yaley, who lives in Washington, D.C., received the Generation Orange Award from Syracuse University.