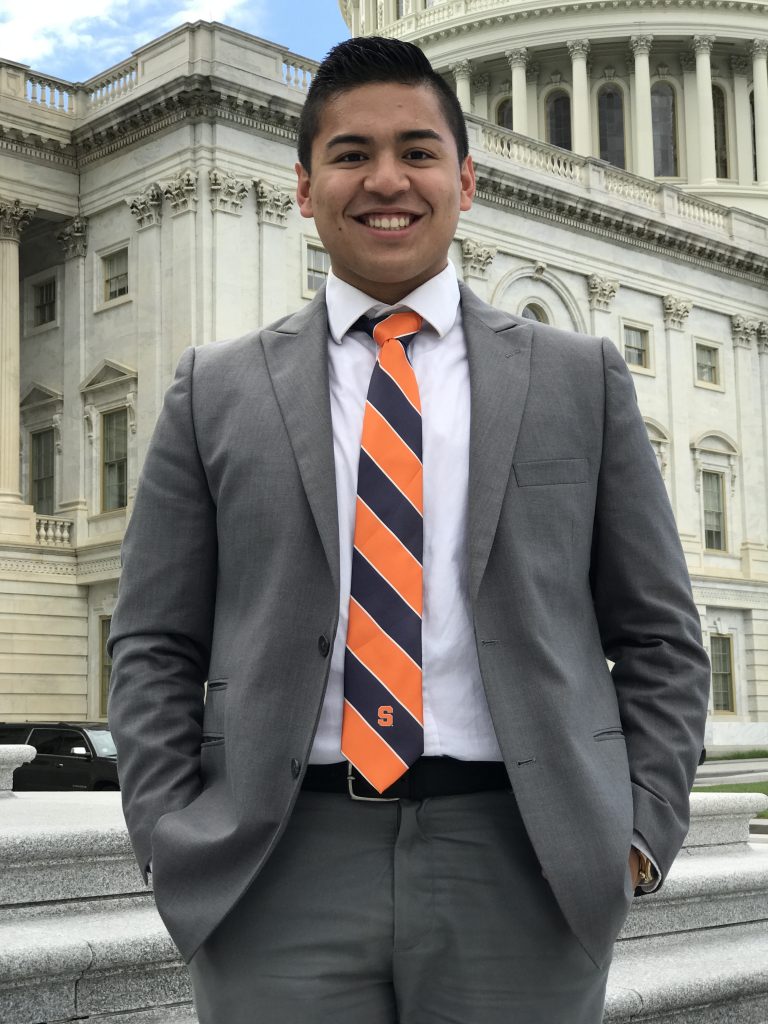 Andrew Regalado ’20 knew he wanted to spend the summer living and interning in Washington, D.C. He just had to figure out how to make it work.

The Chino Hills, California, native pursued scholarships and applied for a role with his home state’s representative. And this past summer, he was right where he wanted to be.

Regalado, a political science major in the College of Arts and Sciences and the Maxwell School of Citizenship and Public Affairs, was a congressional intern for U.S. Representative Ed Royce of California, who is chairman of the House Foreign Affairs Committee. He also was accepted into an experiential scholar program, Leadership and The American Presidency (LTAP), which is a co-sponsored by the Ronald Reagan Presidential Foundation and Institute (RRPFI) and The Fund for American Studies (TFAS).

“My summer in Washington, D.C., has not only helped me grow in many skill areas, but also as a leader and young professional,” says Regalado, who is the speaker of the assembly for the Student Association’s 60th Legislative Session. “Stepping out of my comfort zone throughout the U.S. capital and engaging in today’s political process has afforded me unbelievable insight and challenged me to continuously look at our democracy from different angles.”

Regalado learned about scholar programs through The Fund for American Studies from an SU alumna who had participated in a TFAS program and mentored Regalado through the OrangeSeeds first-year leadership empowerment program.

“We were speaking about how I wanted to live in Washington, D.C., for the summer but did not know how to make the move and where to start regarding housing, academic credit, etc.,” Regalado says. “LTAP soon became the answer because of the motto to ‘Live. Learn. Intern.,’ which was exactly what would make my dream living in D.C. come alive.”

As part of both the Ronald Reagan Presidential Foundation and Institute, which awarded him a scholarship, and The Fund for American Studies, the Leadership and The American Presidency institute hosted 60-plus students and focused on experiential learning and case studies about presidential legacies. He attended numerous site briefings and networking events to explore career paths and ways to apply his academic coursework.

Once accepted into the program, Regalado applied for an internship with Congressman Royce. “As a political science major, we talk a lot about elected positions, but not too much about the teams behind them or people they work with,” he says. “Additionally, today’s politics are heavily highlighted in the media and I wanted a better understanding of what it looked like off the TV screen.”

For the internship, which started in May and went through the end of July, Regalado managed constituent correspondence, including mail, emails, phone calls, casework and different requests.

“Being the middle man between my home district and the staff was invigorating because growing up in the area, I always thought I knew so much about people’s concerns and political beliefs, but the internship taught me otherwise,” he says. “There was so much to learn and a lot of information to decipher, translate and pass on to the representative.”

Another special opportunity of working in the halls of government: walking in the U.S. Capitol every day.

“That in itself was inspiring because learning the history behind every wall and door was humbling. From Sen. Charles Sumner, who brought up the conversation of abolishing slavery, to seeing the Berlin Wall on President Ronald Reagan’s statue, the history embedded into each inch of the building was breathtaking,” says Regalado, who shared the history during tours with visitors from his home district.

He also experienced being part of the overall operations, such as setting up press conferences and planning for meetings with foreign dignitaries.

Another important aspect of being in Washington, D.C., was being able to live there. “I would not have been there without my SU community behind me,” says Regalado, who is also part of the Forever Orange: Student Alumni Council. “The SU Alumni Club of Washington, D.C., awarded me a scholarship that made living in D.C. possible.”

Regalado says he is appreciative of the alumni support and the time they took to meet with him to talk about career paths. “Our SU Alumni never fail to support our goals, considering that they were once in the same exact shoes,” he says.

The most enlightening thing about living and working in D.C. was meeting people and hearing their stories.

“It ultimately taught me that everybody in D.C., regardless of position or status, is there for a reason—to learn more, make a difference and have a purpose every day,” Regalado says. “It was beyond humbling—meeting with CEOs and elected officials to newly hired assistants and other interns—that everyone agreed that there is always room for improvement, growth and coming up with new ways to make something happen both for personal journeys and the country.”

The experience helped him form new perspectives and shift his goals.

“After learning that my education can be a tool for success and exactly how it can help me in the future, there are many different courses I want to take this upcoming year,” Regalado says. “Additionally, I have a clearer understanding of how I want to return to D.C. and where I would like to be placed in a future career.”