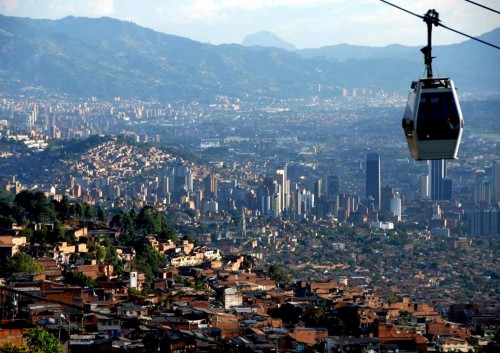 The city of Medellín, Colombia, has been rejuvenated through the work of a progressive mayor, his successors and a continuing collective of politicians, city administrators, urban designers, artists and architects, including School of Architecture Professor Francisco Sanin.

In November, School of Architecture Professor Francisco Sanin and his 13 studio students will travel to Medellín, Colombia, to visit a city transformed.

Once known as “the most dangerous city in the world” for its drug cartels and dangerous streets in the 1980s, Medellín has been reawakened through the work of a progressive mayor—and his successors—and a continuing collective of politicians, city administrators, urban designers, artists and architects, including Sanin. Their plans to take back the city focus on using big and small measures of urban design to revive the social fabric and promote equity among all citizens.

Sanin grew up in the South American city and has traveled back countless times to contribute to and promote the ideas of thoughtful design in helping rejuvenate the city.

Beginning in the early 2000s, public spaces, such as libraries, medical centers, parks and transportation systems were constructed within neighborhoods that were plagued by violence, insecurity and poverty. The philosophy of then-Mayor Sergio Fajardo was to build the most beautiful buildings in the most disadvantaged areas—instead of creating impressive structures near the seats of wealth and power—to give dignity and create opportunities for these communities.

“They used architecture and urban design as a tool for social and political transformation,” Sanin says. “Within the span of four years the mayor had empowered the city and the city was completely turned around.”

In recent years, the city has won international prizes for its stunning transformation, including the Lee Kuan Yew World City Prize in Singapore and the Curry Stone Prize in the U.S., and was recognized in a “60 Minutes” story.

“It was an incredible turnaround from a city where nobody would go or touch to a city that is now recognized for its social and urban transformation,” Sanin says. 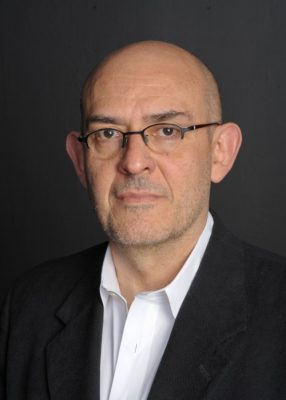 For Sanin’s students, the semesterlong studio and trip will allow them to learn about and experience a city that has benefited from new ways of thinking about urban architecture.

As part of the Rubin Global Design Studio Medellín, students will be researching the potential for urban transformation by a new tram and Metrocable line, the city’s public gondola system that connects the city center to its outer, more disenfranchised neighborhoods in the steep hills surrounding the city.

Supported by alumnus Todd Rubin, the Rubin Global Design Studio supports architecture students’ travel to international cities every year to immerse themselves in other cultures.

An important kickoff to this year’s studio was a lecture and panel discussion this week—Sept. 18 and 19—at the School of Architecture with three key people in the Medellín transformation: Alejandro Echeverri, director of URBAM (a design research center), Medellín; Jorge Pérez, former director of urban planning and former acting mayor, Medellín; and Alejandro Restrepo, current director of strategic urban projects, Medellín.

In November, students will meet with the city officials, students and members of other institutions in Medellín and present their urban and architecture research on the gondola system.

“For our students, it’s a great opportunity to understand and experience one of the most interesting cities in terms of urban design,” Sanin says. “As a faculty member to be able to expose our students and school to these ideas is amazing, and as a person from Medellín to be able to bring and hopefully provoke new ideas from students is also quite exciting.”

A place of community

As a boy growing up in Medellín, Sanin remembers the city neighborhoods or “barrios” as a place of community and safe spaces, organized around a public square with a church, shops and vibrant street life.

After finishing his architectural studies at Universidad Pontificia Bolivariana, Sanin pursued professional opportunities in Europe and the United States. While in England, Sanin taught at the Architectural Association School of Architecture. “It was a bed of new ideas, rethinking of architecture and the city,” Sanin says. People began questioning traditional ideas about urban planning, and instead thinking about the role architecture could play in creating social equality and cultural richness and vitality in cities.

Sanin had begun developing his own ideas on urbanism during his schooling in Medellín and went back there to do self-initiated work, proposing to the city and to Universidad UPB and others projects and ideas for reinvigorating urban architecture.

By the 1980s, the drug cartels in Medellín had made the city “a bed of violence,” Sanin says. “People were afraid to go out, public space was all but canceled. The city was even erased from tourist maps of Colombia.”

Over many years, the architectural and university communities became more interested in ideas for urban revitalization. “For many years, the university became a center of research for many of the projects that were implemented with Mayor Fajardo, who put forward the political vision that made these projects possible,” Sanin says.

“It was a very long process with very many different people,” Sanin says, including community groups, grassroots organizations and even international organizations. “We participated in that process of giving it a vision and projects. It was done with other university professors and students with the School of Architecture all willing to put the work forward.” 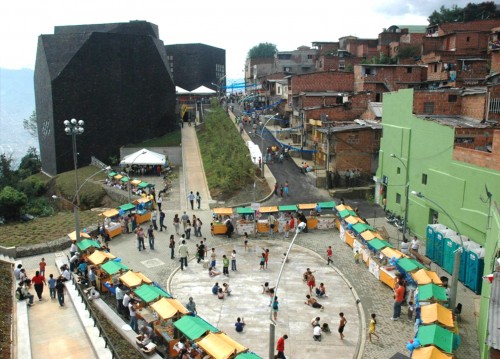 Beginning in the early 2000s, public spaces, such as libraries, medical centers and parks, and transportation systems were constructed within the neighborhoods of Medellín, Colombia, that were plagued by violence, insecurity and poverty.

Working with Mayor Fajardo, Sanin was the academic director of a series of events, colloquiums, symposiums and theater presentations to disseminate information about what was happening. Sanin and a friend and fellow architect, Alejandro Echeverri, also created a master’s program in architecture and the URBAM research center at Universidad EAFIT to further develop the ideas.

Continuing to bring the ideas of Medellín to the world, Sanin was recommended by the city to present at the United Nations in May as a panelist at the “Gateway Portals to the City” conference. “The presentation was about the case of Medellín and showing how it is possible for architecture to play a transformative role in a city, and it is possible to do it if accompanied by the political and social vision,” he says.

Bringing Medellín to the discussion was a validation for Sanin of the work being done. One UN official talked about the need for the UN to recognize the importance of urban design in measuring other indicators commonly used in the UN, such as development and sustainability, he says.

Sites around the world

Sanin’s work, research and teaching has also taken him to sites and schools around the world. He was involved in a study in the city of Monterrey, Mexico, where the university asked him to develop urban design strategies around their campus to deal with issues similar to Medellín.

In Korea, he was asked to design the Korean Pavilion for the Venice Biennale and was co-commissioner in 2008. Three years later, he was asked to design the installation for Korea’s Gwangju Design Biennale, co-curated by world-renowned Chinese artist and activist Ai Weiwei. “It was a great honor and a fantastic opportunity,” says Sanin, also designed the architecture installation—or folly—“Public Room.”

Through his work in Asia, Sanin has also worked on such projects as a master plan study for several cities in China, including the redevelopment of Qianmen Hutong area near the Forbidden City in Beijing. Hutongs, traditional courtyard spaces formed by alleys, have been taken over due to modern development. “Officials started to recognize the value of the hutong,” Sanin says.

As part of this fall’s Seoul Biennale of Architecture and Urbanism, Sanin was asked to organize a forum of city architects in November. “The role of a city architect is something that existed in many places in the 19th century, but it was taken over by planners, who were less interested in the architectural form of the city and more in the ways that funds are managed, market systems flow or transportation was organized,” Sanin says. The role of a city architect has now become more prevalent with the importance of urban design and public spaces—and their impact in collective life and sustainability, both social and ecological.

City architects from Medellín, New South Wales, Paris, Copenhagen and Barcelona will discuss their experiences. “The idea is to come together and think about creating a global network of city architects who share ideas, projects and initiatives on how architecture can help create a better city,” he says.

Sanin, who continued to work with Fajardo—when he became  governor of the state of Antioquia in Colombia—on urban planning and is also involved in projects in Korea, is constantly fascinated by urban life and all that it offers. He finds deeper meaning beyond the physical transformation of city spaces.

“There is a hopeful negotiation of all the differences and conflicts we have and perhaps in creating a more equitable and just society,” Sanin says, and collectively working together and teaching students to be not just expressive, but responsible for those ideals. “That’s where we start.”