The Hausmann String Quartet will be the first guest for the 2017-18 season of Hendricks Chapel’s Malmgren Concert Series on Sunday, Sept. 24. 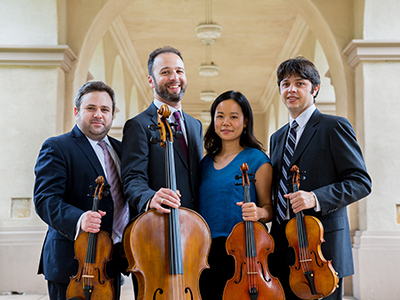 The concert, “Reason Gone Mad,” will begin at 4 p.m. in Hendricks Chapel and is free and open to the public. Parking will be available in the Irving Garage.

The quartet, based in San Diego, will pair new works with the music of Austrian composer Franz Joseph Hayden, who was known for his humor. Miniatures by Ana Sokolovic, Igor Stravinsky and George Antheil will frame two of Haydn’s wittiest works—the “Joke” Quartet and the circus-like Opus 74/2, adding up to a concert embodying Groucho Marx’s definition of humor—“reason gone mad.”

The series was made possible by a generous gift to Hendricks Chapel from alumna Esther Malmgren ’42 in 1991. The free concerts, held throughout the year, feature a wide variety of music.

Inspired by Syracuse University’s 150th anniversary, the Department of Drama in the College of Visual and Performing Arts (VPA) will virtually present “Impact: Past, Present, Future,” a new theatrical piece that will be performed live in a series of four staged…

Performers affiliated with the Setnor School of Music in the College of Visual and Performing Arts (VPA) are teaming up with the Society for New Music (SNM) for world premieres by two up-and-coming composers. Cellist Gregory Wood and percussionist Rob…

Sound Beat: Access Audio is providing two free family audiobooks written by Emmy Award-winning journalist Cheryl Wills ’89,  the great-great-great granddaughter of Emma and Sandy Wills, enslaved people from Haywood, Tennessee. The audiobooks are narrated by the author and are…

Syracuse Stage announced adjustments to the schedule for the remainder of the 2020/2021 season. These adjustments include replacing previously announced shows with new titles and come in direct response to the evolving situation concerning the COVID-19 pandemic. Starting in February,…