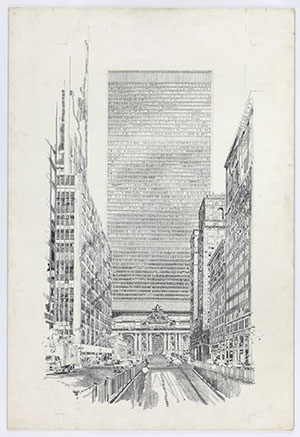 Buried somewhere in the universal archive of architectural projects lies a massive catalogue of unbuilt proposals: a treasure trove of “what ifs” and visions of what could or might have been. Though seemingly inert and consigned to the past, these proposals have the potential to inspire those who contemplate and design for the present and the future.

In 2013, the A+D Architecture and Design Museum in Los Angles hosted “Never Built Los Angeles,” an exhibition co-curated by Greg Goldin and Sam Lubell, based on the pair’s successful book of the same name. Goldin, an architecture critic, and Lubell, an architectural writer and editor, featured more than 100 proposed projects that never came to fruition, painting a dramatic picture of what might have been.

The exhibition invites visitors to explore “the alternative paths New York City could have traveled” and “encourages us to think beyond the present tense and push the boundaries of what the future of the metropolis holds.”

In conjunction with the exhibition, Goldin and Lubell are teaching a “Never Built New York” course this fall to Syracuse Architecture students studying in the school’s New York City studio program at the Fisher Center. 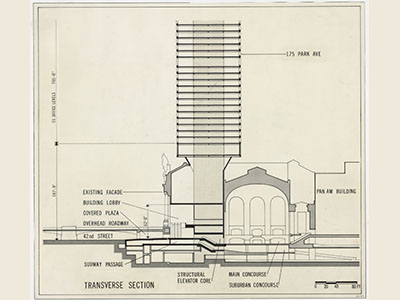 “This is an exceptional opportunity for our students,” says Dean Michael Speaks. “Greg and Sam not only have incredible insight on New York City architectural history, but also the unique energy and challenges faced by the design community at the core of this urban center.”

In their book, Goldin and Lubell write “On close scrutiny, the catalogue of unbuilt New York projects demonstrates just how hard it is, when a designer conceives of something new or outside the orthodoxy, to realize that innovation. In most other cities, this cold fact might be taken for granted; but in New York, where ceaseless creativity and aspiration are the norm, it is surprising how many potentially brilliant buildings are confined to the archives, and how many city plans have been erased, in some cases even before they were made public.”