‘Deej,’ Film about Autism and Inclusion, to Screen on Sept. 25

This month, the team behind the acclaimed new documentary, “Deej,” launches the Deej Inclusion Tour, a series of more than 50 campus and community screenings across the United States. The goal is to promote inclusion—in families, schools and communities—of all neuro-divergent people, especially nonspeaking autistics. The Deej tour stops at Syracuse University on Monday, Sept. 25, when the film screens at Watson Hall Theater at 6 p.m.  The event is free and open to the public. 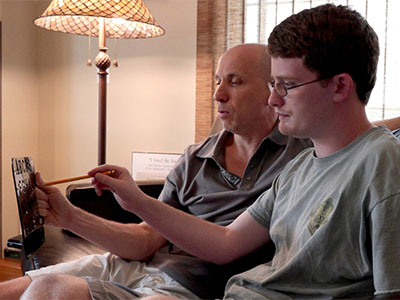 A scene from the film “Deej”

The screening will be followed by a discussion with DJ “Deej” Savarese.

The film is captioned; American Sign Language (ASL) interpretation and Communication Access Realtime Translation (CART) will be available for the discussion. Parking is available in the Booth Garage on Comstock Ave. Additional accessible parking is in the Q5 lot on University Place. If you have requests for accessibility and accommodations, please contact Dani Weinstein at 315.443.9379 or daweinst@syr.edu.

Abandoned by his birth parents and unable to speak for himself, DJ Savarese (“Deej”) found not only a loving family but also a life in words, which he types on a text-to-voice synthesizer. As he makes his way through high school and dreams of college, he confronts the terrors of his past, obstacles to inclusion and the sometimes paralyzing beauty of his own senses. In his advocacy on behalf of other nonspeaking autistics, he embraces filmmaking and poetry, and discovers what having a voice can truly mean.

In this first-of-its kind collaboration between a veteran filmmaker and a nonspeaking autistic, Robert Rooy and DJ share editorial control as they navigate the challenges of representing autism. “Deej,” the result of this often difficult partnership, is a story told largely from the inside, by DJ—not by his parents or autism experts or even the camera. At its core, “Deej” reflects the level of participation that disability rights advocates insist upon: “Nothing about us without us.”

The “Deej” screening event is presented by the School of Education, Cultural Foundations of Education, Disability Cultural Center, Institute on Communication and Inclusion, Taishoff Center for Inclusive Higher Education, Center on Human Policy and the Douglas Biklen Landscape of Urban Education Lecture Series.

“Deej” will have its broadcast premiere on America ReFramed on Tuesday, Oct. 17, at 8 p.m. on the PBS World Channel (check local listings).