The College of Visual and Performing Arts’ Rose, Jules R. and Stanford S. Setnor School of Music will celebrate the life of Frederick Marvin, professor emeritus of music, with a memorial concert on Saturday, Sept. 16, at 11 a.m. in Setnor Auditorium, Crouse College. The concert is free and open to the public. 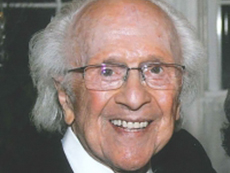 Marvin, a legendary concert pianist and music scholar, died in May at the age of 96 in Vienna. The concert will include remembrances from students and friends, audio of Marvin’s recordings and performances by Richard Hicks ’76, Victoria Von Arx G’77, Tish Goettle-Kilgor ’78 and Professor Emeritus William Goodrum.

“It was a happy day at the Syracuse University School of Music when Frederick Marvin presented his first Crouse College solo piano recital,” writes George Pappastavrou, director emeritus of the school, in the concert program. “That high-caliber command of the instrument and a repertoire of music fresh to our ears augured well for the future of the school, for attracting gifted students and for enhancing the national reputation of the University’s musical establishment.”

Marvin began his concert career at the age of 16 in his hometown of Los Angeles and studied with Milan Blanchet and Arthur Schnabel. His New York debut garnered him the Carnegie Hall Award for the best debut of the season. After several years spent touring around the United States, he moved to Vienna and gave concerts throughout Europe.

Marvin is renowned for his research, editing, publishing and recording of the works of Antonio Soler, an 18th-century Spanish composer whose music had been hidden in obscurity until Marvin brought it to light. Marvin garnered two Del Amo Foundation grants, three Fulbright Fellowships and three grants from the United States-Spanish Joint Committee for Cultural and Educational Cooperation for his research on Soler. His scholarly achievements brought him the honor of Knight Commander of the Spanish Orden del Merito Civil from the Spanish government. He was also awarded the Medaille de Vermeil, Croix de Commandeur of the Societe Academique Arts-Sciences-Lettres of France for his solo concerts.

In addition to Soler, Marvin brought to light the works of Czech composer Jan Ladislav Dussek. In 2000, Marvin received the Cervantes Medal from the Hispanic Society of America in New York City, awarded to individuals for eminence in the field of Hispanic poetry and music. He was also made a fellow of the society.