‘The Three Musketeers’ Brings Fun For All to Syracuse Stage 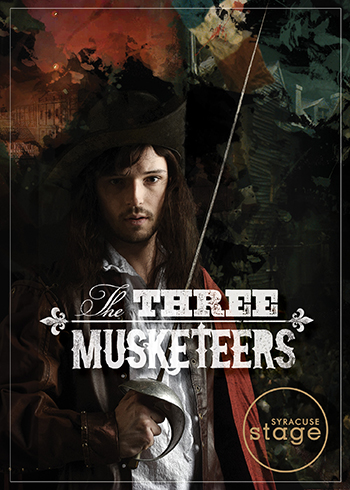 Adapted by Catherine Bush, playwright-in-residence at the Barter Theatre in Abingdon, Virginia, and co-produced with the Syracuse University Department of Drama, “The Three Musketeers” is a sweeping and engaging tale featuring a cast of 18 outfitted with more than 50 costumes by Marianne Custer, including period gowns.

Hupp chose to start the season with “The Three Musketeers” because of its wide appeal and because it is a work that inspires a creative response in artists and audiences alike.

“The show is full of adventure and romance,” says Hupp. “I wanted the first show to be broadly engaging and include the audience as part of the fun. The classics spark our imagination and take us places we don’t ordinarily get to go to, like 17th-century France.”

Dumas’ epic follows the dashing young D’Artagnan and his three companions, Athos, Aramis and Porthos, as they fight for the honor of their queen. Carefully guarded secrets, lavish swordfights and sweeping romances all develop as the musketeers duel their way into glory. The fights, expertly choreographed by D.C. Wright, range from large-scale brawls to one-on-one duels and embrace a variety of tones from comedic to dangerous.

In keeping with the demands of Dumas’ sprawling and intriguing tale, Stanley A. Meyer’s set accommodates almost 20 locations as the action shifts from the streets of Paris to secret rooms in royal chambers. Hupp says Syracuse Stage’s Archbold Theatre is perfect for “The Three Musketeers” because “It is large enough to embrace an epic, yet small enough to bring the audience right into the action.”

Dumas’ work has been translated into more than 100 languages and adapted into a multitude of films. Bush’s task was to transform the 400-plus page novel into a new and exciting experience.

“I like the challenge of taking a story written in a totally different place and time and making it accessible to our audience today,” says Bush. “Being able to take that reflective material that an author used and condense that to two hours of incredible theater is amazing!”

The world of the play comes to striking visual life with the help of costume designer Marianne Custer. Custer has worked in costume design for 45 years and based her costume ideas on paintings and garments from the Baroque era (1600-1750).

“In my discussions with Bob, I began research primarily through paintings and the existing period, starting from the 1630s,” says Custer. “I discovered Baroque paintings from French painters like the Le Nain brothers that looked so rich and luxurious. Their paintings and other Baroque pieces inspired some of my sketches.”

“The Three Musketeers” production involves lots of movement, and Custer has designed a wardrobe that not only looks beautiful, but will stay intact during the show’s swashbuckling fight scenes.

“These costumes are going to have fairly unique needs because of the amount of combat action required in the play,” says Custer.

Similar demands are placed on Meyer’s set. In addition to allowing for swift transition to multiple locations, he must also accommodate the fight choreography. Wright calls the set design a wonderful gymnasium that will afford opportunity to showcase the physical skills of the cast.

Aiding, too, in the creation of adventure and romance is Ryan Rumery, who is composing original music specifically for this production. Rumery has been sitting in on rehearsals and working in real time to provide underscoring integral to Jonathan Herter’s sound design.

An historic adventure of this scale requires the coordination and integration of numerous creative components. In addition to the design elements, the production has dancing staged by Anthony Salatino and songs coached by Rebecca Karpoff.

As a season opener, “The Three Musketeers” celebrates the expansive potential of live performance.

“Only theater can deliver a really imaginative, far-flung and shared experience,” says Hupp.