Continuing her engagement with disability rights scholarship and advocacy around the world during her sabbatical year away from the College of Law, Professor Arlene Kanter visited Israel in August 2017 to work on a research project to support students with disabilities in higher education. 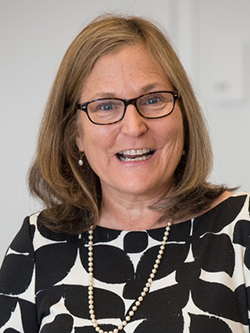 In collaboration with five faculty members from Haifa University—Naomi Schreuer, Dalia Sachs, Sagit Mor, Carmit Shpigelman and Miri Sarid—the research project seeks to assess the efficacy of Israeli university and college centers that have been developed in the past five years to support students with disabilities.

“This project grew out of research I began when I was in Israel as a Fulbright Scholar at Tel Aviv University in 2009 and 2010, and as a Distinguished Switzer Fellow, supported by the U.S. Department of Education’s National Institute on Disability Rehabilitation and Research, in 2010 and 2011. In those years, I conducted comparative research on access to higher education for students with disabilities in the U.S. and Israel,” Kanter says.

What Kanter found in Israel was that there were no laws or policies about access to higher education for students with all types of disabilities, and little information or research about these students or the services they receive at the universities and colleges in Israel.

“As a result of my findings, I suggested to the National Insurance Institute’s (NII) Office of Special Projects of the need for a nationwide system of centers to support students with disabilities in universities and colleges,” Kanter continues. “NII enthusiastically accepted my proposal, and in 2010, the institute initiated a government-funded program to create a nationwide system of centers to address the needs of students with disabilities in higher education.”

Known as the “Revolution in Higher Education,” Kanter says that this program resulted in government funding to support the development of centers at Israel’s eight public universities and at about 40 of Israel’s 60 private colleges.

“This is the first such program of its kind in Israel and perhaps the world,” Kanter notes. “Prior to this program, some services were available to students with certain learning disabilities, but only at a few of Israel’s universities and colleges. This ‘Revolution in Higher Education’ program applies to all students with all types of disabilities at all of Israel’s institutions of higher education.”

In addition to funding the centers, the NII also sponsored a training program for staff of the centers. The program was developed by Kanter and Nitsan Almog, whose dissertation at Bar Ilan University—on Israeli university students with vision impairments—was supervised by Kanter. The training program designed by Kanter and Almog—in cooperation with NII staff—was largely modeled on successful centers that support students with disabilities in U.S. universities and colleges, such as the one at Syracuse University.”

Subsequently, NII chose Kanter and a research team at Haifa University to conduct a five-year study on the efficacy of these centers and their role in changing the culture of universities to become more inclusive of students with disabilities.

In August 2017, Kanter and her colleagues reviewed their preliminary research results. She explains that the research uses focus groups, questionnaires and interviews with students, staff and faculty (conducted in Hebrew by the Haifa University researchers). Data will be compiled into what will be Israel’s first nationwide database on students with disabilities, the barriers they face in accessing higher education and the role the centers play in meeting their needs.

Kanter also will be the lead author of an upcoming article about the research project and about a new regulation that was enacted by the Israeli Parliament requiring all Israeli colleges and universities to have support centers for students with disabilities. This upcoming article will discuss the efficacy of these new centers and how they are addressing the barriers students face in higher education in Israel. The article will also discuss the new regulation which,  according to Kanter, is “one of the most important results of the ‘Revolution in Higher Education’ project, since it creates a legal mandate for all universities and colleges in Israel to have centers to support students with all types of disabilities.”

Israel is appropriate for comparative research on access to higher education for students with disabilities, Kanter explains, because Israel’s “new nationwide system of support centers provides a model for other countries that are seeking to increase access of students with disabilities to higher education, particularly those countries that have ratified the United Nations Convention on the Rights of People with Disabilities (CRPD).”

Kanter worked with the UN from 2001 to 2006 on drafting the CRPD, including Article 24 that guarantees the right of all children and adults with disabilities to inclusive education, including in higher education. The UN adopted the CRPD in 2006, and since then it has been ratified by 174 countries, including Israel—but not the United States.

Kanter says she will continue her work on this research project, along with other activities, when she returns to Israel after her current semester as a visiting scholar at Harvard Law School. Kanter was awarded the prestigious Lady Davis Fellowship at Hebrew University for the spring 2018 semester. At Hebrew University, she will teach a course on Human Rights and Disability at the law school, as well as work with faculty throughout the university on a new disability studies program that was launched earlier this year.