Deyhontsigwa’ehs–Creator’s Game, Lacrosse Weekend will provide living lessons in the history and culture of the Haudenosaunee, says Philip Arnold, Department of Religion Chair in the College of Arts and Sciences and the former founding director of Skä·noñh: Great Law of Peace Center. “This weekend is a chance to honor the deep legacy of the Haudenosaunee and celebrate their ongoing influence on the world as peacemakers, environmental stewards and as major players in the international lacrosse community,” Arnold says. 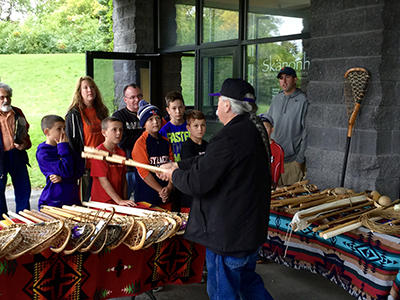 At last year’s Wooden Stick Festival, Alf Jacques, a member of the Onondaga Nation and a renowned lacrosse stick maker, demonstrates his craft.

Lacrosse–which the Haudenosaunee call Deyhontshigwa’ehs, “they bump hips”–was played more than 1,000 years ago at Onondaga Lake, where five warring nations came together in peace. The game’s popularity and the prominence of Haudenousanee lacrosse players tell the story of the community’s efforts to maintain its identity and sovereignty.

“Central New York has benefited from this rich legacy and, as a result, this area has become the hotbed for lacrosse,” Arnold says.

Arnold and his wife, Sandy Bigtree, are organizing the weekend through the Indigenous Values Initiative, a nonprofit organization that supports the mission of teaching the enduring values of the Haudenosaunee. “The center is the Onondaga Nation, and this includes the values embedded in the game of lacrosse,” Arnold says.

For nearly 30 years, Arnold has studied New York state’s history and religious landscape in the context of the Haudenosaunee Confederacy, also known as the People of the Longhouse.

Lacrosse fans, as well as educators and students, will enjoy the weekend, which concludes with a Carrier Dome scrimmage featuring the Iroquois Nationals, Syracuse and Team Israel. “We are showcasing world-class lacrosse, but the reason we are involved is that the wooden stick is a reference point for teaching people about the values of the Haudenosaunee,” Arnold says.

The Haudenosaunee Wooden Stick Festival will take place Thursday, Sept. 28, to Saturday, Sept. 30, on the Onondaga Nation. The educational festival will showcase speakers and demonstrations of lacrosse, wooden stick making, native food, arts, traditional dance and culture, and sovereign representation at the United Nations. “Spirit Game: Pride of a Nation” will be shown twice daily. The documentary, produced by One Bowl Productions in partnership with the Haudenosaunee, premiered in Syracuse in June and features Haudenosaunee leaders and lacrosse players. Admission to the festival and film are free.

The 2017 Lacrosse All Stars North American Invitational (LASNAI) runs Sept. 28-30. The tournament brings elite box lacrosse players from around the world to play in the Tsha’ Thon’nhes (“where they play ball”) on the Onondaga Nation, south of Syracuse. Twenty-one teams from six nations will participate in games from 8 a.m. to midnight in the fieldhouse and outside (free outside games). Tickets are $15 per day or $25 for the tournament.

Presentations by the Thompson brothers (Jeremy, Hiana, Miles and Lyle, all Nationals team members) and N7 camp for Native American youth will take place at the Onondaga Nation’s softball fields Friday, Sept. 29, and Saturday, Sept. 30. The Thompsons will also play in the box lacrosse tournament and the Dome scrimmage

Syracuse University Lacrosse hosts international lacrosse scrimmages at 12:30 and 2 p.m. on Sunday, Oct. 1, at the Carrier Dome. Tickets are $10 and parking is $5.