With Help from a College of Law Student, New York’s ‘Dyslexia Bill’ Is Signed Into Law

Before she enrolled at the College of Law, Ptahra Jeppe, at just 24 years old, was hired by New York State Assembly Member Jo Anne Simon (NY-52) as her chief of staff. And despite her youth, Jeppe achieved something that even the most experienced political operative would be proud of, working on dyslexia legislation, then helping to advocate for a bill that was passed by both the New York Assembly and the Senate with unanimous bipartisan support. 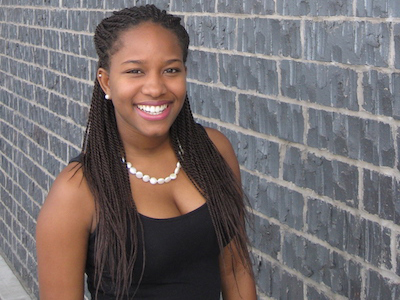 However, that bill—which amends state education law to address how New York schools assist students with dyslexia, dysgraphia and dyscalculia—sat on Gov. Andrew M. Cuomo’s desk. It might have died there had not Jeppe and other dyslexia advocates then sent letters to the governor urging him to sign it. Their perseverance paid off. On Aug. 21—coincidently the first day of her second year at the College of Law—Jeppe was informed by Simon that the governor had signed A8262/S06581 into law.

“I was literally in tears because now in New York State we are one step closer to all students getting the opportunity to be successful,” says Jeppe, who describes the bill as “a small step that might make a big difference.” That could be an understatement considering that before this law was passed, dyslexia, dysgraphia and dyscalculia (dyslexia is difficulty in learning to read or interpret symbols; dysgraphia is difficulty in learning to write; dyscalculia is difficulty in making arithmetical calculations) were not being recognized by name in New York State schools. Instead, they were referred to generically as “learning disorders,” even though the International Dyslexia Association estimates that about 85 percent of schoolchildren who qualify for special education have a primary learning disability in reading and language processing and that as many as 15-20 percent of the population as a whole have some symptoms of dyslexia.

Jeppe explains that among New York teachers there was little awareness and understanding of the condition, as well as a lack of language-based interventions needed to help students with dyslexia. A dyslexic herself, Jeppe says she knows intimately how this lack of awareness affects students with the condition. “I was told I wouldn’t graduate high school, and entering seventh grade I was reading at a second-grade level.”

Legislation to address assistance for dyslexic students in New York schools was originally proposed some years ago by a reading specialist, who happens to work at one of Jeppe’s childhood elementary schools, in Brooklyn. The “Dyslexia Bill” was first introduced by former state Assemblyman Jim Brennan, then taken up in 2015 by Simon, a fellow Brooklynite, during her first year in the legislature. The legislation proved a good fit for Simon—not only was her new chief of staff a dyslexia advocate, Simon is a disability civil rights lawyer. Jeppe got to work on another early draft of the bill, and the current form of the bill was re-introduced in June 2017. “I thought it would take a while to go through the legislature, but it passed relatively quickly,” says Jeppe. “I am very proud that it turned out to be a bipartisan bill.”

The new law directs the state commissioner of education to issue a guidance memorandum to school districts and the Boards of Cooperative Educational Services (BOCES) informing them of the unique educational needs of students with dyslexia, dyscalculia and dysgraphia. It also instructs the state Department of Education to develop a guidance memorandum for schools consistent with federal requirements and informs schools that they now may include the names of specific learning disorders—such as dyslexia, dysgraphia and dyscalculia—in students’ individualized education programs (IEPs) and not just use the broad category of “learning disorder.”

Now that the bill is passed, Jeppe says, earlier diagnosis of dyslexia will be encouraged and teachers can research the disability and seek out language-based interventions and technologies that can help. “There will be a greater chance for dyslexic students to find success the way I have.”

One of Jeppe’s professors, Arlene Kanter, who directs the College of Law Disability Law and Policy Program, agrees with her student’s assessment of the bill’s potential to change lives. “Although students with dyslexia are typically entitled to services under the federal Individuals with Disabilities in Education Improvement Act, the new legislation will inform teachers of the unique educational needs of students with dyslexia and related disorders,” says Kanter. “With better-informed teachers, students with dyslexia will have a greater chance to learn and to achieve their own individual potential in school and beyond.”