The Syracuse University Alumni Association (SUAA) is once again hosting a series of football and basketball tailgates for select home and away games during the 2017-18 academic year. 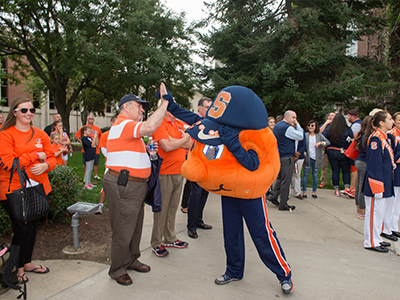 Otto high-fives a fan during a tailgate.

At these pre-game gatherings, alumni, friends of SU and guests are invited to enjoy food, drinks and great Orange giveaways with fellow ’Cuse fans before cheering on the Orange.

Tailgates are planned before the following football games: home vs. Middle Tennessee (Sept. 9), on the road at NC State (Sept. 30) and home vs. Pittsburgh for Orange Central (Oct. 7).

The Middle Tennessee tailgate will begin at 2 p.m. inside the Heroy Geology Building lobby (across from the Carrier Dome), with kickoff slated for 3:30 p.m.

The NC State and Pittsburgh tailgates will start two hours prior to kickoff, though game times haven’t yet been announced.

During the basketball season, the SUAA will have several tailgates prior to the men’s and women’s games, including the Dec. 2 road game vs. Kansas in Miami, part of the Hoophall Miami Invitational. That tailgate will begin at 3:30 p.m., with tipoff at 5:30 p.m.

Additional tailgates will be announced as details are confirmed.

Visit the football and basketball tailgate registration pages to sign up for pre-game gatherings.

Once the complete game schedule for the men’s and women’s basketball teams has been released, be sure to check alumni.syr.edu for more information on the rest of the tailgate schedule.