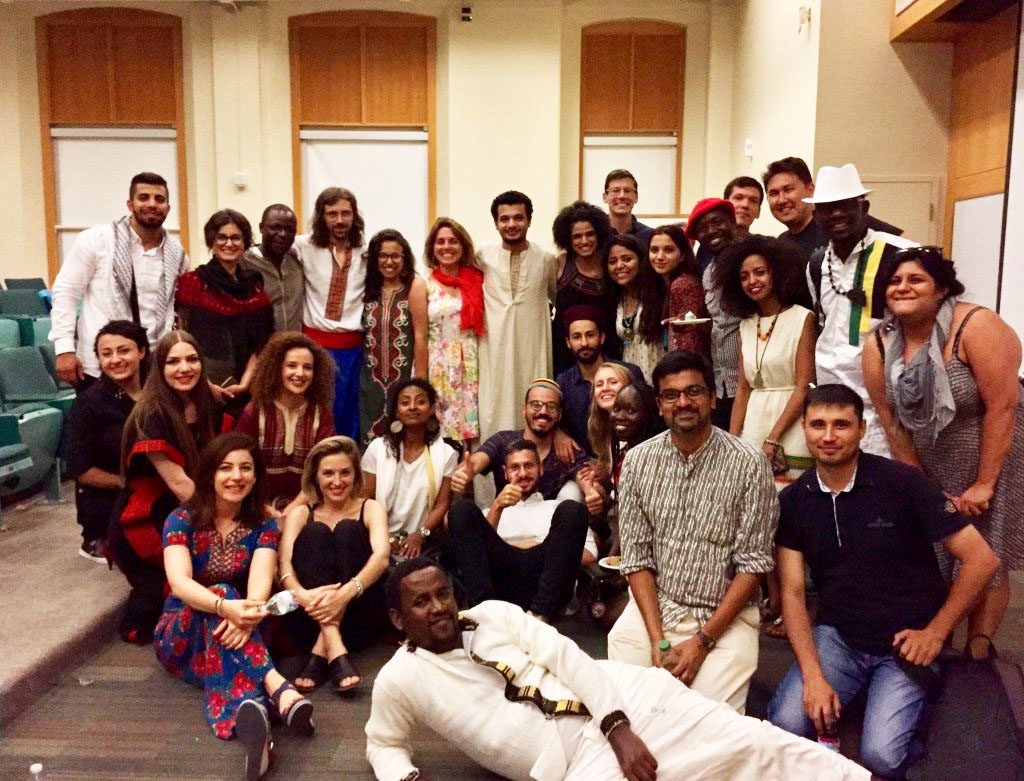 International students accepted with the Open Society Foundations’ scholarship program were on campus this month for their summer orientation before they head to universities across the U.S. Two dozen are enrolled at Syracuse University.

The students received Open Society Foundations (OSF) scholarships to attend graduate school at one of many American universities, and Syracuse was their first stop to acclimate them to the American classroom experience before heading off to schools across the country. Twenty-four of the students are remaining at Syracuse University, where they were accepted into programs to pursue their graduate studies.

The OSF scholarship program, which provides funding to students who demonstrate academic and professional excellence and are deeply committed to leading positive social change in their communities, has typically held the summer programs in different geographic areas around the world. This year, for the first time, an introductory session was held in the United States—at Syracuse University.

“Last year we decided to pilot the program in the host country the students would be attending,” says Michael Paller, program manager of scholarships for the Open Society Foundations. “We already had a partnership with SU—many students are doing a master’s degree here in law, public policy or education—and because we had such good relationships with the faculty we thought it would be optimal.”

Students apply to the OSF foundation for one of three scholarship program areas—Civil Society Leadership Award, Disability Rights Scholarship Program or Palestinian Rule of Law. They pursue degrees in a variety of fields, such as communications, development studies, education, law, public policy, human rights and gender studies. Once they become a finalist, OSF staff recommends schools they should apply to. After they are accepted at an academic institution, students receive full scholarships, fully funded between the OSF and the host institution where they were accepted.

“The students are all very motivated. The primary award, the Civil Society Leadership Award, of which three-quarters of the students are awarded, are for individuals who are working in home countries on various issues related to human rights, democracy and supporting communities who are marginalized in their home countries,” Paller says. “They all have some work experience and are high achieving.”

The three-week summer program, which began July 23 and wrapped up Aug. 13, was an intensive three weeks in which students built on their foundations in their social science area and received assistance with academic writing.

They focused on becoming used to an American higher education classroom. This encourages participants to become more critical thinkers and be in a classroom that is more learner-centered, Paller says. “The students come from learning environments that are more teacher-centered and lecture-based. This is preparing them for that environment, to encourage them to participate and ask questions and read critically.”

Students took two classes, one with an academic writing instructor and another with a social science-area instructor, which included some Ph.D. students and instructors from Syracuse University, in such areas as legal studies and writing.

OSF student Kalkidan Lakew, who is from Ethiopia, received the Civic Society Leadership Award to pursue an education in policy analysis, which she hopes can contribute to her efforts to challenge policies and decisions that affect public policy outcomes.

“My background is in gender equality and youth empowerment, and I plan to work on women’s equality issues in Ethiopia. Women, who are 51 percent of the population in Ethiopia, are still undermined, oppressed and not represented in decision-making platforms, which makes Ethiopian women voices close to non-existent in the public policy design and implementation,” says Lakew, who will pursue a master’s degree in international development policy at Duke University. “I want to work on policy advocacy and bring critical women’s issues, such as gender-based violence, girls’ education, women’s representation in decision-making and leadership, and women’s access to finance, to the surface.”

Lakew appreciated how the summer program created an engaging environment that enabled students to learn from their mistakes and found the summer program’s academic writing course essential for her upcoming studies. “I am still in the process of adopting to the new environment and system, so the experience sharing with last year’s fellows enabled me to have a better idea about how the education system works,” Lakew says. “Most of all, meeting students from different counties with diverse experiences was the highlight of my three weeks; this is a lifetime opportunity of networking. Last but not least the trip to Niagara Falls is something I will always remember.”

The summer program also included a cultural event where students were encouraged to share some of their culture through a performance or presentation. They also visited local historic sites and visited nearby cities, such as Skaneateles and Niagara Falls.

At the end of the program, those not attending Syracuse for their graduate studies have gone on to such schools as American University, Brandeis University, Duke University, Georgetown University, Washington University at St. Louis and Ohio University.

As students move on to their institutions for their graduate studies and then back to their home countries, they go with hopeful expectations to build up their communities.

“We hope that they return to their home countries with the knowledge and skills they need to take on leadership roles in the organizations that they worked at prior to coming to the program or a newer one they identify when returning to their country,” Paller says. “We hope they will achieve their own personal goals and work toward improving their home countries and their society as a whole in whatever way they see fit.”