Syracuse One of Playbill’s 10 Most Represented Colleges on Broadway

Playbill has ranked Syracuse University on its list of the “10 Most Represented Colleges on Broadway in the 2017-18 Season.” Syracuse tied for the no. 8 spot. 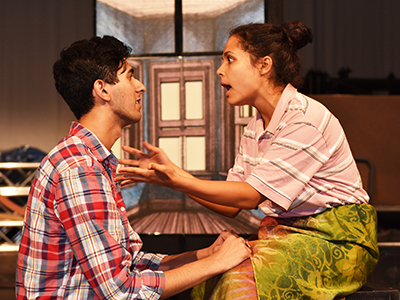 Cheech Manohar ’17 (left, in the Syracuse Stage/Department of Drama’s 2015 Bank of America children’s tour “New Kid”) will make his debut on Broadway in “Mean Girls.” (Photo by Brenna Merritt)

All but two of the alumni listed graduated from the College of Visual and Performing Arts’ Department of Drama, which offers four bachelor of fine arts (B.F.A.) degree programs in acting, musical theater, stage management and theater design and technology, as well as a bachelor of science (B.S.) degree program in drama that features a theater management track. Barbara graduated from the S.I. Newhouse School of Public Communications, and Shew graduated from VPA’s Rose, Jules R., and Stanford S. Setnor School of Music.

According to Playbill’s website, the list “represents not only Broadway shows that are currently open, but a few shows that have announced casting for the 2017-2018 season.” Playbill gathered information from actors’ bios published within Playbill Magazine and notes that the alumni names are “not intended to be a comprehensive account of working Broadway alumni from each university.”