As President Donald J. Trump blamed “both sides” for the deadly violence at a white supremacist rally in Charlottesville, Virginia, recently, his words had the internet talking—and so did a photo. 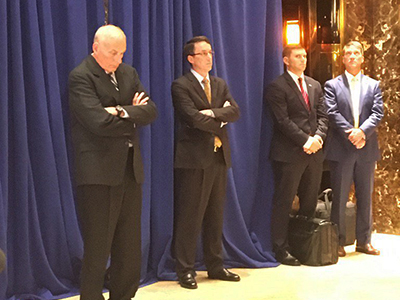 The photo of Chief of Staff John Kelly, left, that went around the world (Photo by Kristin Donnelly)

The image showed President Trump’s chief of staff, Gen. John Kelly, standing with his arms crossed, head hanging down, appearing disappointed by what he was hearing.

The photo was taken by NBC News senior White House producer Kristin Donnelly ’02, an alumna of the Newhouse School. Donnelly tweeted the photo, and in less than a day, it had been liked 30,000 times, retweeted 16,000 times and dissected on network and cable news channels.

As Trump spoke, Donnelly looked over at Kelly and was surprised by what she saw. She said she kept watching him, to make sure she didn’t mischaracterize the moment. “So I watched him for a while, perhaps two minutes or so, and that was the expression the whole time,” she said.

Donnelly had spent several days covering the president’s working vacation from the Trump National Golf Course in Bedminster, New Jersey. Her assignment continued at Trump Tower in New York, where President Trump had planned to make a statement following a meeting about his infrastructure agenda. He was not supposed to take questions, but did.

When the golden elevator doors at Trump Tower opened, President Trump, members of his cabinet and senior advisers emerged. “I saw everyone go for the head-on shot of the group,” said Donnelly. “Most producers tried to position close to Trump.” Instead, Donnelly climbed up on a bench to take a picture, then “started watching the room.”

That’s when Gen. Kelly’s reaction caught Donnelly’s eye, and her tweet caught the eyes of news editors across the country.

Donnelly’s work appears on NBC News’ platforms nearly every night, but it is rare to have an image shared across nearly every network and social media platform.

As for seeing the story inside the story, Donnelly said, “We were doing our jobs as journalists to report the story—and sometimes, there’s more than one.”

Story by Cecilia Tamsen, a 2004 graduate of the Newhouse School.