When Mukund Nayak found out he had won this year’s Padma Shri, one of India’s highest civilian awards, he immediately called Carol Babiracki to offer his congratulations. 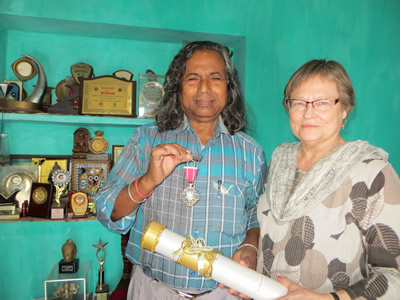 “No, no. The congratulations should go to you,” replied his longtime friend and colleague, who is an ethnomusicologist in the College of Arts and Sciences and the director of the South Asia Center in the Maxwell School of Citizenship and Public Affairs. “This award is for you, too.”

An associate professor in the Department of Art and Music Histories (AMH) in the College of Arts and Sciences, Babiracki has known Nayak since 1981, when he was a low-paid state worker in what is now the East Indian state of Jharkhand. Since then, both have climbed the ranks of their respective professions, while mining the region’s millennia-old folk performance traditions.

That Nayak accepted the award on the eve of India’s 68th Republic Day in January gave citizens—and Babiracki—one more reason to celebrate. The award underscored, among other things, the role of traditional arts and culture in India’s march toward economic prosperity.

“Regional music lives on in India because it embodies a wide range of values pertaining to community, locality, rituals and gender,” says Babiracki, an A&S faculty member since 1999. “Regional performance is a bellwether of social and cultural identity-formation and of processes of change.”

Arguably, no one is synonymous with Jharkhandi arts and culture more than Nayak, a 67-year-old singer, songwriter, drummer, dancer and political activist. He and Babiracki, a scholar-teacher of South Asian music and dance, have spent nearly four decades documenting the endangered or marginal performance traditions of East-Central India. Their current project concerns the traditional village musician caste of the Ghasi.

Consigned to the lowest rung of the local caste hierarchy, Ghasis are usually poor and illiterate. Nayak is the exception to the latter. A polyglot fluent in English, he is one of only a few to have graduated from the village akhra (an outdoor, circular dancing ground) to the urban stage, while preserving his rural musical sensibilities.

“Mukund and I are capturing what’s left of these village traditions—their unwritten histories, their indigenous identities, their contributions to a pan-ethnic, regional musical lingua franca—for an upcoming book,” says Babiracki, the author of several other publications, as well as dozens of scholarly articles and chapters. “He learned his art as a child in the course of collective singing and dancing. One can hear these roots in his dense, edgy vocal style.”

Nayak resides in the bustling capital of Ranchi. His musical language and style, however, recall the Nagpuri music traditions of southwestern Jharkhand.

“Nagpuri” is a geographical term, referring to the Chota Nagpur Plateau that covers most of Jharkhand and its adjoining states. “Chota Nagpur” is a nod to the Nagavanshi, a dynasty that ruled the area from the 11th to 14th centuries. “‘Nag’ in ‘Nagavanshi’ alludes to people from West-Central India, such as Maharashtra, or to the Nag clan of the local Mundas,” Babiracki says. “It is likely they intermarried.” 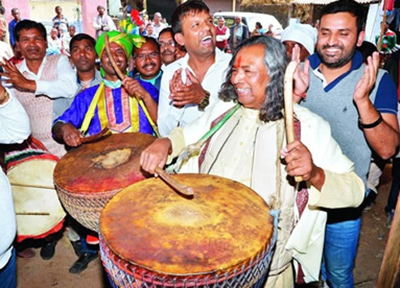 Nayak plays the “nagara” drum outside his home in Ranchi. (Photo by Prishant Mitra / The Telegraph)

She considers Nayak’s approach to regional music sophisticated and mature—heavy on the percussion and on rhythms and meters that are unusual by Western standards. The result is a rich body of composed, cultivated music. “Mukund embodies these traits because he comes from a long hereditary line of professional, multi-talented performers,” Babiracki continues. “He is my most valued source of information about Nagpuri music.”

With support from A&S, she has interviewed scores of Nagpuri musicians and dancers, including Nayak’s children. Among them are his older son, Nandu, a renowned singer and drummer; Nayak’s younger son, Pradhuman, a U.S.-based singer, dancer and actor; and Nayak’s youngest daughter, Chandrakanta, a singer and women’s rights advocate.

Babiracki is known for her interest in historiography (i.e., the study of history) and in issues of gender, ethnic identity and globalization. It’s no surprise that her collaboration with Nayak is highly interdisciplinary. Witness recent projects on the life histories and performances of nacnis(professional female entertainers in East-Central India) and the role of Nagpuri women in urban stage and mass media performances.

“Carol has a hands-on, collaborative approach to research that invites musicians to be partners, not subjects,” says Romita Ray, associate professor of art history and chair of AMH. “This encourages musical and cultural sustainability, often in the face of outward modernization. She is both a scholar and an activist, working with musicians with whom she has built close relationships over the past few decades and preserving folk traditions that have been nurtured for generations.”

Babiracki first met Nayak in southern Bihar (which eventually seceded to form Jharkhand), while doing preliminary dissertation research. He was a star of the Nagpuri stage—she, a Ph.D. student at the University of Illinois at Urbana-Champaign, exploring Munda tribal music and dance traditions.

“[Nayak] quickly pulled me into his stage troupe, a group consisting, for the most part, of Ghasi men, and I subsequently traveled throughout the area, performing Nagpuri songs on bamboo flute with them in village stage performances,” she recalls in “Shadows in the Field: New Perspectives for Fieldwork in Ethnomusicology” (Oxford University Press, 2008), co-edited by Gregory F. Barz and Timothy J. Cooley. “My perceptions of Nagpuri music-culture were colored by Mukund’s own representation and interpretation.”

Performing turned out to be Babiracki’s respite from “intellectualizing and interviewing” and from the stress of adapting to the Munda’s “intense collectivism and censorship of behavior.” The experience also complemented her formal training in flute, piano and voice at the University of Minnesota. 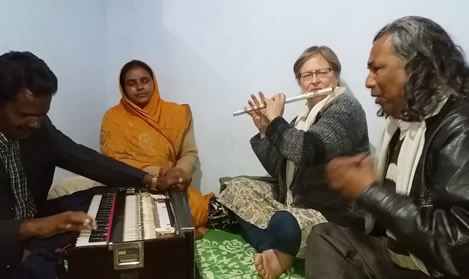 Babiracki and Nayak (far right) jam with the legendary Mahavir Sahu on harmonium.

Babiracki rejoined Nayak in the late ’80s to establish an indigenous performing troupe and school in Jharkhand called Kunjban. Before long, she began assisting the group with tours of the United States, southeastern China (e.g., Hong Kong) and the Philippines.

Nayak achieved success as a singer-songwriter, but it was his role as a social activist, providing the soundtrack for Jharkhand’s independence, which led to many honors, including the Padma Sri award. One political activist dubbed him the “philosopher” of the autonomy movement.

“Mukund’s protest songs were rallying points for the movement, resulting in Jharkhand’s statehood in 2000,” Babiracki says. “He has since evolved into a cultural activist, working toward the sustainability of the local arts that have lost their traditional patronage support systems.”

Babiracki has returned to Jharkhand a dozen times, often for months at a stretch. (One visit lasted more than a year, thanks to support from the U.S. Department of Education’s Fulbright-Hays program.) Through it all, Nayak has remained her touchstone of original Nagpuri music. “My place in Jharkhand always is onstage or backstage, but rarely in the audience,” says Babiracki, who maintains close ties to Kunjban as a performer, choreographer and videographer.

A highly decorated professor, with a Meredith teaching award to her name, Babiracki resides at the nexus of traditional and modern music. Her main objective, she says, is to expose students to the “phenomenal diversity” of Indian regional music. She does this by creating a highly participatory classroom environment—often “posing questions, searching for understanding and considering music not simply as an autonomous object, but as [something] integral to regional community practices and identities.”

PowerPoint may have a place in her classroom, but so do funky, old tape decks and turntables. The sight of Babiracki clearing away desks and chairs to make room for an akhra is a common occurrence. Such impromptu performing, she says, humanizes Jharkhandi music. It also puts her students on equal ground—much as akhras do in her adopted homeland, some 9,000 miles away.

“The unfamiliar becomes our own,” she smiles. “It’s a powerful way to study something.”

A student team from the College of Visual and Performing Arts’ course DES 204: Creative Problem Solving in the School of Design won a silver award in the Creative Conscious Competition, an international platform that allows students to compete by…

School of Architecture ‘Challenge and Opportunity’ Exhibition Opens in Shanghai

“Challenge and Opportunity,” an exhibition showcasing Syracuse University’s innovation in architecture education during the COVID-19 pandemic, opened Oct.  23 at the Bamboo Art Center in Shanghai. Organized by the School of Architecture in cooperation with Tontsen Architecture Design in Shanghai,…