After Many Years and Many Ceremonies, Nancy Weatherly Sharp Retires as University Mace Bearer 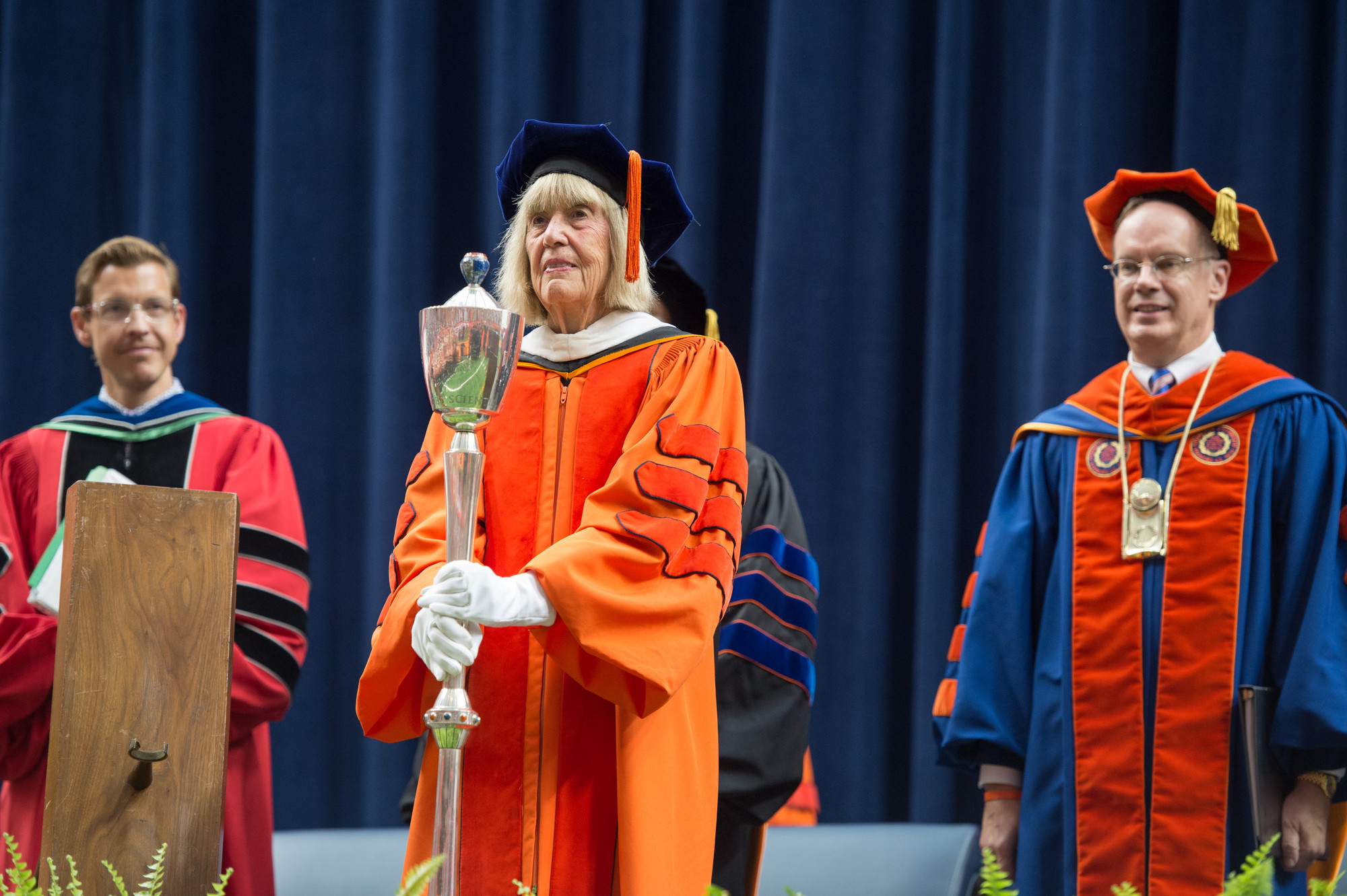 Thursday’s New Student Convocation marked the start of an exciting adventure for thousands of Syracuse newcomers and the end of one University community member’s valuable service in a time-honored role.

The event was the last for Nancy Weatherly Sharp, professor emerita of newspaper journalism in the Newhouse School, in her capacity as Syracuse’s mace bearer. Since 2004, Sharp has carried the charter mace at the head of the academic procession at major University ceremonies—most notably the New Student Convocation in August, the Winter Convocation in January and Commencement in May.

Sharp was the first woman to serve as mace bearer, elected during the administration of Chancellor Kenneth A. Shaw. The tradition of the charter mace began in June 1949, with University Registrar Keith Kennedy leading graduates into Archbold Stadium for Commencement. Through the years, mace bearers have been professors, deans, administrators and one chairman of the Board of Trustees.

“The role of the mace bearer really speaks to the significance we place on those ceremonial milestones that historically define the seasons of the academic year,” says Vice Chancellor and Provost Michele Wheatly. “Nancy has embraced the role with dignity and grace, and she has set a high standard for her successor. I thank her for her loyal service and for her continued devotion to the University.”

“Nancy is a joy to work with. Her long and distinguished faculty career gives her the needed perspective to see beyond the pomp and circumstance to the core mission of SU: continuous and unbroken scholarship in service to society,” says University marshal Shiu-Kai Chin, Meredith Professor and professor of electrical engineering and computer science in the College of Engineering and Computer Science. “As mace bearer, she carries the symbol that represents the power and importance of our mission as a university,” Chin says. “As a person, she is an example to all of us who are privileged to do our part in fulfilling our enduring mission as an educational institution over multiple generations of students, staff and faculty.”

Chancellor Kent Syverud and Vice Chancellor Wheatly are developing a protocol for nominating a new mace bearer, which they will share with the University community in October.

A mace was originally a weapon of war. It has also been used by royalty as an insignia of authority and has long been an important element of ceremony. Syracuse’s original charter mace was carved of wood. It was replaced in 1959 by the one currently in use, which is made of sterling silver and precious stones—a gift to the University by mace bearer Gordon Hoople. The original mace is preserved in the University Archives. When not in use, the current mace is housed with the Department of Public Safety.

Sharp concluded her long and accomplished career as a faculty member and academic administrator following the 2009-10 academic year. She came to the Newhouse School in 1976 after more than a decade as a newspaper reporter. Initially an adjunct instructor, she became a full-time assistant professor in 1980 and was promoted to full professor in 1993.

She was the Newhouse School’s first assistant dean for graduate and professional studies, from 1991-2001. Also during her Newhouse career, she managed the Leaders in Communications Lecture Series and founded the Newhouse Fellows Program, which annually awards two minority journalism graduate students full scholarships, internships and one-year full-time jobs in the media.