Santiago Quiñones ’90 has a knack for being in the right place at the right time—a quality that has served him well in television and film. 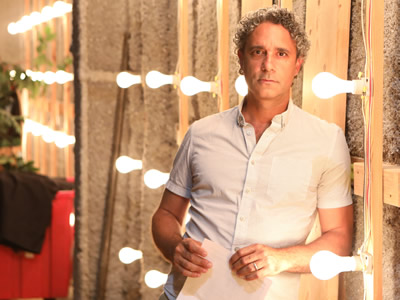 Thus, it is fitting that he began his career as a location scout, tasked with finding and securing suitable filming locations around the globe. His first scouting job, for the Fox police drama “New York Undercover,” almost happened by accident.

“I showed up at the set, and the location manager said to me, ‘I don’t have time to see you because I’m going to a meeting, but wait here anyway,’” recalls Quiñones, speaking by phone from his home office in Lower Manhattan. “He came back an hour later with a new script. Since I was the only person there, he hired me.”

That was 1996—lifetimes ago, by Hollywood standards—and Quiñones has since established himself as a top production and location manager. He also is a budding producer and screenwriter.

Self-employed, Quiñones is in his fourth season with the hit CBS drama “Blue Bloods,” starring Tom Selleck. Quiñones is the show’s production manager, responsible for budgets and scheduling during principal photography. In February, he co-produced his first episode, “In and Out,” in which the show’s main characters investigated the murder of a gang leader, whose shooter, an ex-con, was romantically linked to his parole officer.

“It’s fantastic working with Tom,” says Quiñones, who joined “Blue Bloods” after back-to-back stints on the CBS shows “Hostages” and “Elementary.” “It’s definitely an honor. I mean, he’s an icon.”

Quiñones has worked on nearly 30 feature films, including “The Revenant” (2015), a Western starring Leonard DiCapiro and Tom Hardy; “Safe House” (2012), the spy action-thriller with Denzel Washington and Ryan Reynolds; “Fast Five” (2011), part of the “Fast and Furious” franchise juggernaut; and “Elf” (2003), the holiday comedy featuring Will Ferrell.

He also has dozens of other projects to his name, ranging from TV series to video shorts to documentaries. 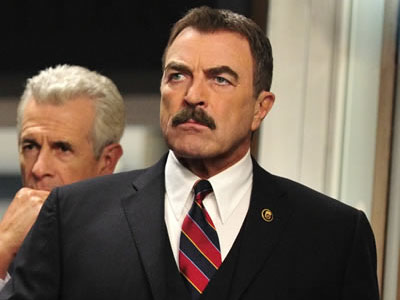 Through it all, Quiñones has collaborated with a bumper crop of A-list directors: Woody Allen, Robert De Niro, Spike Lee, Sidney Lumet, Richard Donner, Laurence Fishburne, Alfonso Cuarón and Richard Benjamin, to name a few. “It’s not uncommon to get a call from someone,” Quiñones says, “and then, 24 hours later, find yourself on a plane bound for Venezuela, Mexico, Argentina or South Africa. It’s exciting work.”

Demanding, too. Long hours and unusual requests are part of the job. Quiñones recalls spending much of pre-production for “Anger Management,” the 2003 comedy with Jack Nicholson and Adam Sandler, scouting “glass locations” in New York City. “It was funny to have all this glass in a movie with ‘anger’ in the title. We ended up with some great locations,” says Quiñones, alluding to Yankee Stadium and Kennedy International Airport.

Weather is a factor, too. While scouting locations in Rio de Janeiro for “The Incredible Hulk” (2008), Quiñones encountered torrential rainfall, which wreaked havoc on the city’s slum-like favelas. “Floods and landslides were constant threats,” he remembers.

“The Revenant,” originally scheduled to shoot in Calgary, was a different matter. Lack of snow forced production to move to the Argentinian city of Ushuaia, off the Southern tip of South America. “I was brought in to figure out the ‘snow problem,’” says Quiñones, adding that New Zealand was one alternative, until the idea of delivering everything to the set via helicopter made it cost-prohibitive. “We settled on Argentina, which had its own challenges. Not only were there no pine trees, but the tree line ended where the snow began. The whole process was like threading a needle.”

Too much snow was the case with “Elf,” whose exteriors were shot in Manhattan during December—a time when most studios are wrapping production. (Holiday films usually shoot in the spring or summer.) “‘Elf’ was complicated, but I had a blast doing it,” Quiñones says. “I knew that, with Will Ferrell, the movie was going to be a hit; with James Caan [as Ferrell’s long-lost father], a classic.” 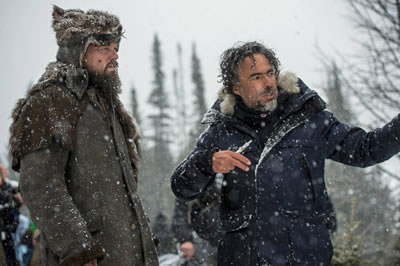 Quiñones traces his interest in television and film to his liberal arts training at Syracuse University. Born to Dominican parents, he grew up on Manhattan’s then-gritty Lower East Side. His father, a cab driver, instilled in Quiñones an unquenchable work ethic and a taste for the outdoors. Schoolwork came effortlessly to him.

“I think I wanted a traditional campus experience,” acknowledges Quiñones, a first-generation college student who transferred from Hunter College to Syracuse in 1987. “I wanted to be away from home, surrounded by beautiful architecture. Stepping onto the Quad for the first time just felt right.”

Truthfully, Quiñones was lucky to be at Syracuse at all. He recalls a Lubin House staffer accidentally telling him that he did not “fit” the admissions criteria. A brief call into the Office of Admissions, however, proved otherwise. Quiñones found out he had less than a week to register for classes and find a place to live. (By then, the student-housing deadline had long passed.) Fortunately, Quiñones remembered jotting down the phone number of a friend’s sister who belonged to a sorority on campus. He retrieved the crumbled piece of paper, on which his baby sister had scribbled, and dialed the number. “I began my Syracuse career as an unofficial little brother in her sorority,” he beams.

An English major with a penchant for writing, Quiñones arrived at Syracuse during a golden age for the M.F.A. program in creative writing. Jay McInerney G’86 was still basking in the success of “Bright Lights, Big City” (Vintage, 1984), while professors Raymond Carver and Tobias Wolff had all but solidified their place as the generation’s top fiction writers. (Carver would die in 1988, and Wolff would spend almost another decade as the program’s director.) Meanwhile, M.F.A. students George Saunders, Tom Perotta and Chris Kennedy, all members of the class of 1988, were poised to usher in a new era of American literature.

Quiñones lapped up everything the Department of English—and the College of Arts and Sciences—had to offer.

“I couldn’t believe my good fortune,” says Quiñones, who also is an amateur musician. “We had so many great writers who taught in both the M.F.A. program and the undergraduate creative writing track: Tess Gallagher [Carver’s wife], Douglas Unger, Stephen Dobyns and Safiya Henderson-Holmes, one of my most favorite poets. They exposed us to all these other writers, including T.C. Boyle, Charles Simic and Mario Vargas Llosa, who visited campus. The feedback I got on my own writing was incredible.”

Sometimes, the talent level could be a little intimidating. Quiñones recalls Dobyns making him write an essay about why Quiñones should take his class. Once admitted, Quiñones often was asked to read poems aloud—in Spanish. Not bad training for someone who, a decade later, would befriend essayist Nora Ephron, landing a walk-on part in her film “You’ve Got Mail.”

“A professor once told me that only smart people major in English. I like to think he was right,” Quiñones quips.

By his own admission, all Quiñones wanted from Syracuse was a well-rounded education; in reality, he felt ready to “take on the world.” After graduation, Quiñones returned to Manhattan to work as an advertising sales rep—first for a music magazine and then for 3M. It was while taking night classes at the School of Visual Arts that he learned of the city’s involvement with the motion picture industry. His interest was piqued.

“I went to the mayor’s office [the Office of Film, Theatre and Broadcasting], got a list of all the productions filming on location in New York City and started showing up. An indie film eventually offered me an internship,” he says. 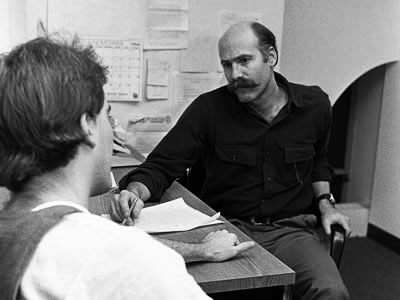 Quiñones was still wet behind the ears when he strode onto the set of “New York Undercover.” The aforementioned location manager handed him 10 rolls of film and told him to shoot local churches and cathedrals. Quiñones was embarrassed to admit that he knew little about photography, even less about operating his mom’s large manual camera.

“Everything I brought back was black,” he confesses. “I deeply apologized, and offered to make it up to him the following day for free. I knew it was the only other chance I was going to get.”

Twenty years on, Quiñones still pinches himself when reflecting upon his success. He chalks up much of his career to luck and hard work—and good academic grooming.

“I use my Syracuse training every time I read a script, looking for things to make the story flow better,” says Quiñones. “The University taught me the importance of tension and character development in storytelling. It also reminded me to never give up on my dreams, no matter how fantastic they are.”