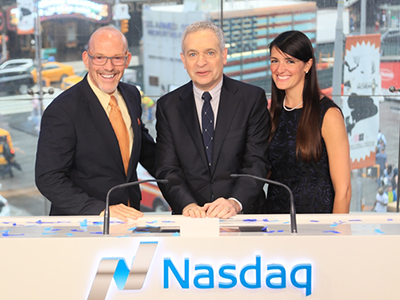 Romaniello, an alumna of the Newhouse School, is chief of staff for CSS Entertainment. The company made history today as the largest exchange-listed initial public offering (IPO) completed under Regulation A+ (Reg A+) guidelines, and the first to list on the higher tier Nasdaq Global Market. Reg A+ guidelines provide an alternative to a traditional IPO and make it easier for smaller, early stage companies to access capital by allowing them to raise money and offer shares to the general public and not just accredited investors.

Sean Branagan, director of the Newhouse Center for Digital Media Entrepreneurship, has been helping Romaniello and the CSS team connect with the startup community, and was invited by Romaniello to attend the opening bell.

Chicken Soup for the Soul Entertainment, a video offshoot of the famed book series, produces and distributes high-quality, entertaining television and online video programming. Its investors include actor Ashton Kutcher, who in June signed on as executive producer for two of the company’s new unscripted series. CSS Entertainment is also the exclusive distributor for Kutcher’s digital media company APlus.com, which specializes in positive storytelling and social change.