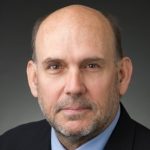 The New York Times’ Lens blog about photography, video and visual journalism featured multimedia photography and design professor and Alexia Tsairis Chair for Documentary Photography Mike Davis in their feature about photo editors who have made a difference.

Davis hired photographer Eric Draper to work for him at the Albuquerque Tribune in 1990, and Draper states he learned more from Davis in that time than he did in his entire career up to that point. Draper later became the chief White House photographer for George W. Bush, and asked Davis to be his photo editor during that time, working closely together on the images of 9/11 and other significant events of those eight years.

Davis, who has twice been named Newspaper Picture Editor of the year, is an independent photography editor and educator who works with visual journalists around the world to elevate their photography for portfolios, projects, gallery shows, books and contest and grant submissions. He has been a picture editor and visual leader at National Geographic magazine, the White House and several of America’s leading newspapers.