The family of Richard F. “Dick” MacPherson, along with the Syracuse University community and the public, gathered in Hendricks Chapel to pay tribute to “Coach Mac.”

In the 1980s, Coach Richard F. “Dick” MacPherson breathed new life into the Syracuse University football program. He confidently built teams that competed in several bowl games (including the 1988 Sugar Bowl), posted an undefeated regular season, and notched stunning victories against top-ranked teams like No. 1-ranked Nebraska and West Virginia. Much of that magic happened in the University’s storied Carrier Dome.

MacPherson died on Aug. 8 at the age of 86. On Friday afternoon, his family, the Syracuse University community and the public gathered in Hendricks Chapel—in sight of the Carrier Dome—to pay tribute to “Coach Mac,” an exceptional man who found his greatest purpose in his faith, his family and football. 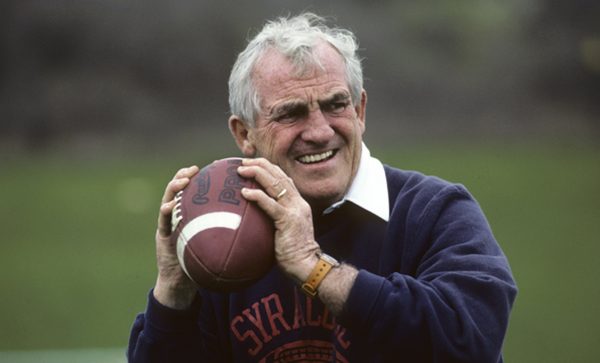 The chapel was adorned with arrangements of white and orange flowers surrounding a selection of photos that chronicled his extraordinary life. There was a photo of him in his football uniform at Springfield College; a photo with his beloved wife, Sandra, and their daughters, Maureen and Janet; and photos from the sidelines as head coach of the Orange and the New England Patriots. The featured photo was a legendary shot of Coach Mac in his “coach’s tower,” a structure that was built specially for him by the University’s Physical Plant so that he could simultaneously watch over the offense and the defense during practices.

The more than 700 people who filled the seats in Hendricks Chapel were a tapestry of Coach Mac’s life—from his beloved family, to his former players and colleagues, to those who had never met him but felt his impact on the Syracuse community.

“He gave his heart not to just football but to the totality of the community,” said the Rev. Dr. Brian Konkol, dean of Hendricks Chapel, in his opening remarks. “Crowds knew him as Coach Mac, but Richard F. MacPherson was so much more. A child of Old Town, Maine, and a favorite son of Syracuse.”

For those who spoke throughout the service, moments of grief soon became moments of laughter and lightheartedness in recalling the sayings and the wisdom that was authentically Coach Mac. All offered the same piece of his wisdom that Coach Mac espoused at the beginning of their remarks, “a short speech makes for long friendships.”

Legendary Central New York broadcaster Doug Logan asked those gathered, by show of hands, to remember some of the extraordinary successes in Coach Mac’s Orange tenure — the 1984 win against No. 1-ranked Nebraska, a 1987 win against Penn State, and the 1987 undefeated season.

“Our beloved coach showed how grounded he was by celebrating with his wife, family and friends with a pizza and a beer or two at the Varsity,” he said. Logan then led the assembly in a standing ovation for Coach Mac.

Father James O’Brien, pastor of Pope John XXIII Church in Liverpool and a friend of the MacPherson family, spoke of Coach Mac’s devotion to his Catholic faith. Father O’Brien said Coach Mac was a man of faith and fidelity, one who never strayed from the values that underpinned his life. Coach Mac, he said, believed in practices that enhanced his purpose in life. For him, that meant attending daily Mass and sharing his many gifts with others.

“He was a coach and a teacher,” Father O’Brien said. “He teaches us today that we need to practice, to do the things daily that enable us to be the best version of ourselves.”

Father O’Brien reflected on a golf trip he had taken to Ireland with MacPherson and other friends. They visited a pub, where Coach Mac, with his charm and personality, “captivated the place.” By the end of the evening, the pub’s owners were outfitted with every piece of Syracuse clothing and accessories that Mac could round up.

Mac’s oldest daughter, Maureen, spoke of her father’s legendary perseverance, from growing up as the 11th of 12 children to working with the University to get the things he needed to build a successful football program. She spoke of his devotion to his grandchildren, including the signal system he worked out with granddaughter Suzy to determine when he could safely leave her at nursery school. She spoke of his devout faith, and induced tears of laughter in telling how her father attended Mass in Pennsylvania before a Penn State game and blew out a candle that had just been lit by Penn State Coach Joe Paterno (it didn’t help — Syracuse lost that game).

“I was proud and privileged to be his daughter,” Maureen MacPherson said. 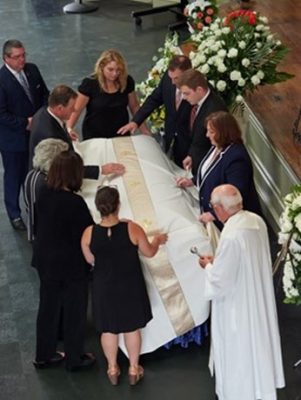 Family members spread the pall over the casket.

Molly Sweeney, one of Coach Mac’s four grandchildren, reflected on his role as her beloved Papa.

“He always made each one of us think we were his favorite,” she said. To her, Coach Mac represented family, faith and football, but so much more as well — Maine doughnuts, coffee, full-sized Snickers bars and breakfasts.

“He is the kind of person who loved you so much you thought your heart would explode,” she said. “Heaven is a little more orange now because of you.”

ESPN broadcaster Sean McDonough ’84, was sort of a reluctant Syracuse University student after not being admitted to his first choice, Notre Dame. He was a student employee in the sports information office, in the fall of 1980, when he attended the press conference introducing MacPherson as the new Syracuse football coach. Coach Mac, who was greeting everyone from the Chancellor to the student interns, shook McDonough’s hand. Through conversation, he realized that he knew McDonough’s father, Boston sportswriter Will McDonough.

“We are going to talk about what Sean McDonough can do to help get this football program off the ground,” Coach Mac promised. A few weeks later, true to his word and with a 15-minute notice, Coach Mac met McDonough outside of Day Hall. He proceeded to take him to Mass and football practice, and thus began McDonough’s work with the football program.

McDonough said he learned many things over the next three-and-a-half years, which uplifted his SU experience. Coach Mac even stepped in when McDonough was facing the possibility of not returning to school because of finances. Within months, McDonough became the voice of the Syracuse Chiefs, which helped to launch his professional broadcasting career.

“It is not an overstatement to say that Coach’s intervention saved the arc and path of my life,” McDonough said. “He changed my life, saved my life and continued to influence my life.”

McDonough also recalled MacPherson’s exuberance and love for Syracuse in the coach’s role as a broadcaster for Orange football games, which began after his tenure as head coach of the New England Patriots.

“Syracuse and Central New York have never had a better ambassador than Coach Mac, and they never will,” he said. 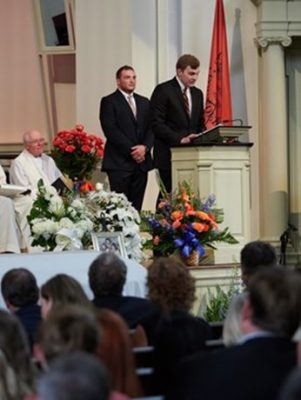 Macky ’14 and Cameron ’16 MacPherson, Coach Mac’s grandsons, concluded the service with their reflections on their beloved grandfather.

Macky ’14 and Cameron ’16 MacPherson, Coach Mac’s grandsons, concluded the service with their reflections on their beloved grandfather. Both played for the Orange; Macky is now a graduate assistant to Coach Dino Babers and Cameron is pursuing a graduate degree at the University.

“There are not enough hours in a day or days in the year to explain what he meant to me,” Macky said.

Coach Mac was a father figure to his grandsons — he taught them how to throw a football, play golf, be tough through pain and grow to be men of morals, character and integrity. Both brothers have fond memories of growing up on the Syracuse sidelines, attending practices led by former head coach Paul Pasqualoni.

Cameron, a poet, talked of his Papa as a man of ritual. He remembers many things — rosary beads, coffee, barber shops, diners, chocolate-glazed doughnuts — things that Coach Mac loved that combined into wonderful memories for his grandchildren. The most important memories they have taken from their grandfather, though, are the ones that defined him best — his displays of character, values, of doing the right thing. He did that for 86 years, and now, Cameron said, “You have earned your rest.”