In 2014, the Department of African American Studies in the College of Arts and Sciences held a daylong conference to commemorate the 50th anniversary of Nigerian writer Chinua Achebe’s landmark novel “Arrow of God.” The symposium featured some of the top scholars in the field of African literature to talk about the man who was called “the father of the African novel.” 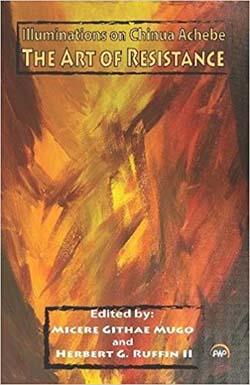 The cover of “The Art of Resistance,” featuring Herbert Ruffin’s painting

The scholars gathered not only to honor “Arrow of God,” which is seen as one of the most important indictments of colonialism in literature. They also wanted to remember Achebe himself, who had died just the year before. Some in the Syracuse University audience may have remembered his receiving an honorary Doctor of Humane Letters from the University in 1998.

This spring, that conference has been memorialized in a book, “Illuminations on Chinua Achebe: The Art of Resistance,” issued by Africa World Press. It was edited by Herbert G. Ruffin II, associate professor and chair of African American studies, and Micere Githae Mugo, professor emerita of African American studies, the co-conveners of the 2014 conference. In addition to contributing through editing and writing, Ruffin lent one of his paintings for the volume’s cover.

“The idea was always to produce a book that could become a model for the production of new knowledge and freedom as a result of it,” Ruffin says

The conference’s focus was “Arrow of God” (1964), which many see as Achebe’s masterpiece and the culmination of what is known as his trilogy, but he is known for many works, including novels, short stories, poetry and essays. “No other African writer has succeeded as he has in evoking and perpetuating the African orature heritage through the written tradition,” says Mugo, herself an orature expert.

As Ruffin and Mugo say in the book’s introduction, “The total legacy of this great writer cannot be confined to one work alone, however fine it might be.”

Achebe’s best-known novel is actually his first book and the first of the trilogy, “Things Fall Apart” (1958). According to Mugo, that book is the one that “placed African literature on the world map.” It has sold more than 12 million copies and been translated into more than 50 languages.

Mugo says the conference participants were challenged to come up with new theoretical formulations on “Arrow of God,” Chinua Achebe as a writer and his legacy as an individual; to bring “illuminations on Achebe” to the conference table, and they did just that.

The book contains 12 essays, including one by Achebe’s daughter and two by Mugo, for whom Achebe served as a mentor and friend. “I owe a great deal of my literary achievements to Professor Achebe,” Mugo says.

The book has been well-received by scholars. Says Tsitsi Jaji, associate professor of English at the University of Pennsylvania: “Mugo and Ruffin have accomplished that rare feat of bringing to light new reasons to celebrate the life and work of one of African literature’s founding figures. … Here scholars, authors of fiction, editors and historians elucidate why ‘Arrow of God,’ a far less-studied novel than his first, is essential to comprehending Achebe’s impact on African, and indeed, world letters.”