Selfies Are Everywhere—But Why?

Selfies: the self-portraits of the digital age. These photos posted on social media serve as a way to document a new haircut, a vacation or a night out on the town. 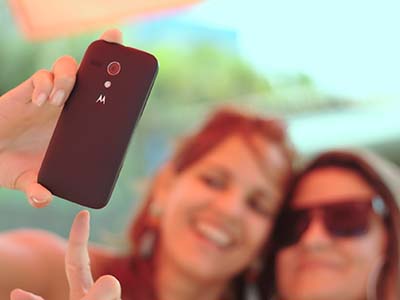 But researchers from the Newhouse School have taken a deeper look at selfies and what they say about the psychological factors that drive people to take them.

Specifically, they looked at different types of selfies—solo selfies, group selfies and selfies that use editing software—and how they correspond with personality traits such as narcissism, the need for popularity, the need to belong and the Big Five personality traits (extraversion, agreeableness, conscientiousness, neuroticism and openness to experience). Research was conducted anonymously online.

What they found from their surveys of social media users is that:

“Since social media is based on weak ties, this platform is ideal for narcissists who do not seek out interpersonal intimacy but rather work towards satisfying their own vanity,” says Kim.

But Chock also cautioned against stigmatizing all selfies.

“There are certainly other issues, such as the peer group pressure that expects to see photos on social media. Such as the ‘pics or it didn’t happen’ expectation that we will post selfies on social media,” she says.

“Our results demonstrate that selfie posting is not only a form of narcissistic behavior but also involves a range of interpersonal motivations,” says Kim.

Both researchers want to continue to study this further in order to better understand the psychological motivations behind our self-expressions on social media.

Research on Selfies from Syracuse University News on Vimeo.