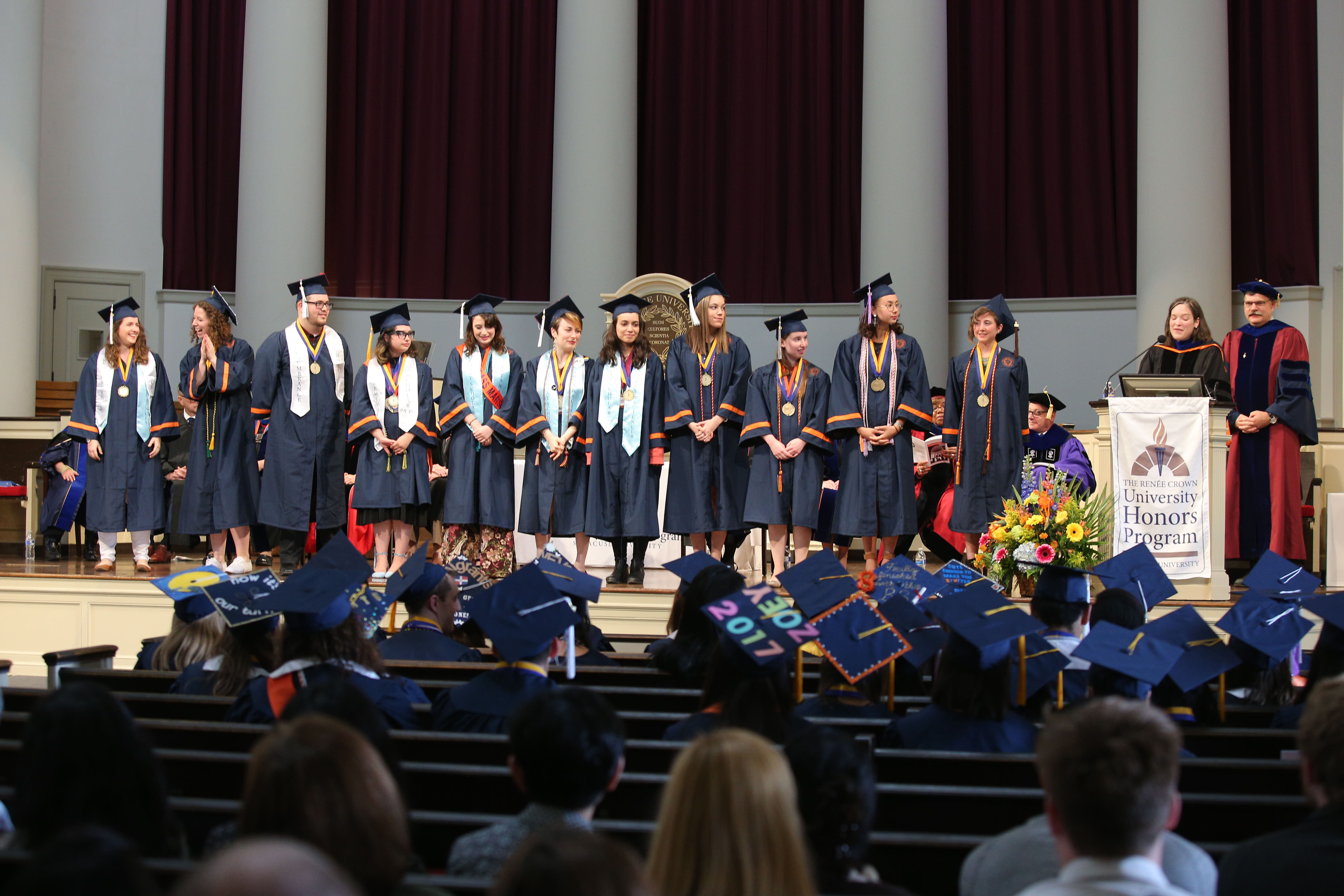 Several students in the Renée Crown University Honors Program were recognized with top awards for their capstone projects during the honors program convocation in May in Hendricks Chapel.

For students in the Renée Crown University Honors Program, the honors capstone project can be a challenge to complete. The project typically requires intensive research, writing, professional or creative work over the course of already busy junior and senior years.

The reward is in the chance to discover their research passion and possibly build a foundation for future pursuits. It’s also a chance for a special recognition of their outstanding efforts.

Each year a faculty committee reviews the projects, and several prizes in various disciplines are awarded to Renée Crown University Honors students for their capstone work. Prize winners receive a $500 award, and honorable mention recipients receive $250.

“It’s a tough call to select one capstone project as the winner, as the projects are invariably engaging, well-written, thoughtfully researched and original,” Schell says. “The projects demonstrate potential to continue beyond the occasion of the capstone. Some projects are publishable, or will be published or released within months or a year or two; some will become the basis of graduate-level work.”

The selection process is intense.

“Honors capstones are judged by creativity; quality of writing, film, photography or performance; or scientific accomplishment, depending on the project and major,” says Ford Maxwell Professor of South Asian Studies and Maxwell School Professor of Anthropology Susan Wadley, a selection committee member. “Once the capstone decisions are made by the divisional committees, representatives of each division work to choose the Orlin prize, where the need to judge across different kinds presentations—for example a sung performance versus a biological research project—becomes difficult and until we can ultimately find agreement.”

This year’s top winners, who were announced May 12 at the Renée Crown University Honors Program Convocation, are the following:

Soleil Young ’17 (biology, College of Arts and Sciences, and anthropology, College of Arts and Sciences and Maxwell School) was awarded the Orlin Best Capstone Prize and social science prize for her project titled: “Please Forget to Floss: Developing an Assay for Identifying Tuberculosis in Dental Calculus from the Smithsonian’s Huntington Collection (1893-1921).” Her advisors were Associate Professor Shannon Novak and Associate Professor Anthony Garza.

In her abstract, Young, who was also a University Scholar, Remembrance Scholar and College of Arts and Sciences Class Marshal, notes her research into examining new ways of tracking and understanding tuberculosis in the past, utilizing the DNA trapped in calcified dental plaque, or dental calculus. She reports the first-ever successful isolation of ancient tuberculosis DNA from the dental calculus of 13 individuals from the Smithsonian’s Huntington Collection.

Young was proud of her capstone—and happy and relieved to have it completed and turned in after working on it for so long.

“It was exciting and surprising when they called my name for the social sciences division, and even more surprising and exciting when they called it for the grand prize. I had a very big smile on my face,” Young says. “It was also, after the fact, nice to know that other people thought that it was a good project, and to get recognition for all my hard work, and the hard work of everyone who helped me.”

Hasmik Djoulakian ’17 (women’s and gender studies and citizenship and civic engagement, College of Arts and Sciences and the Maxwell School) was awarded the William Sauers Prize for Best Capstone Project in the Humanities for “Analyzing “Meliha Nuri Hanem,” “In the Ruins” and “My Soul in Exile” by Zabel Yesayan.” Djoulakian’s advisor was Associate Professor Himika Bhattacharya.

In her abstract, Djoulakian, a University Scholar and a Coronat Scholar, notes her research “is a feminist cultural analysis of the novels, letters and short stories of Zabel Yesayan,” a writer, activist and teacher in the early 20th century during the Armenian Genocide. “This project insists not only on telling the history of an invisibilized genocide, but also on telling that history through a critical feminist lens based on the documented observations and creative interventions of a woman who lived during the genocide,” Djoulakian notes.

Djoulakian says working on her capstone was a “self-conscious and reflexive process,” as she thought about choosing a different topic that wasn’t so connected with how she views herself, her family and lineage. “I had so many moments of doubt—was my writing good enough, was I developing my ideas thoroughly, did it make sense to spend so much of the capstone talking about my methodology?” she says, but in the end, she knew her topic was the right one for her academically and personally.

“Winning the Humanities Prize was a meaningful moment of affirmation. It felt not only like a recognition of my work but also of narratives and stories around the Armenian Genocide, which are typically unrecognized,” Djoulakian says. “I would not have been able to produce this capstone without the support of my adviser, reader or any of the other people who helped me, and receiving the humanities prize is a testament to how much they supported me.”

According to her abstract, “Osiris” “is a narrative short film which emphasizes renewable energy as Earth’s one Hail Mary, placing the power of science and engineering into the hands of a female protagonist.” Ferentchak directed and produced the film and in her project she notes that an analysis of the film demonstrates how a successful independent film (www.osirisblackstart.com) can move from development to distribution.

“The Renée Crown Honors Program gave more to me than any single other organization on campus. I would not have been able to accomplish what I did with my senior thesis film without their support,” Ferentchak says. “The $500 award for Best Creative Capstone will go a long way to helping me promote ‘Osiris’ in the film festival circuit. They frankly invested in me and I will never forget this.”

Jessica Toothaker ’17 (biology, College of Arts and Sciences) received the top prize in the sciences and engineering category for “Oocyte Development and Ovarian Health in an Estrogen-Deficient Mouse Model and the Implications for Female Infertility.” Her advisor was Professor Melissa Pepling.

Toothaker’s work examined the formation of oocytes (a female cell that develops into an egg) in mice. In her abstract of the research, Toothaker, a University Scholar and a Goldwater Scholar, notes “This project uses immunocytochemistry, histological staining, optical and cryostat sectioning, and oocyte morphology analysis to determine when ArKO mice [genetically engineered mice with a certain enzyme] experience oocyte loss, differential folliculogenesis and generation of aberrant follicles in the ovary.”

In her abstract, Terhune, a Coronat Scholar and a Remembrance Scholar, states “This paper uses three main segments of the current HBO show ‘Last Week Tonight with John Oliver’ (LWT) as a case study for how this show, as a news parody program, attempts to achieve the goals of education and goals of entertainment by analyzing the patterns in the way content is presented.”

“Winning a capstone prize validated the countless hours I put into my research of ‘Last Week Tonight with John Oliver’ (LWT) as educational entertainment, as well as the overall study of political satire as a pedagogical tool. It was empowering to know that the committee found my research important and well-done,” Terhune says.

“I want to be making socially conscious comedy that helps people learn and laugh, so it was incredibly helpful for my own development to research and analyze how LWT does it. Additionally, the prize money helped me afford to enroll in comedy classes in Chicago so I can continue to hone my skills,” Terhune says. 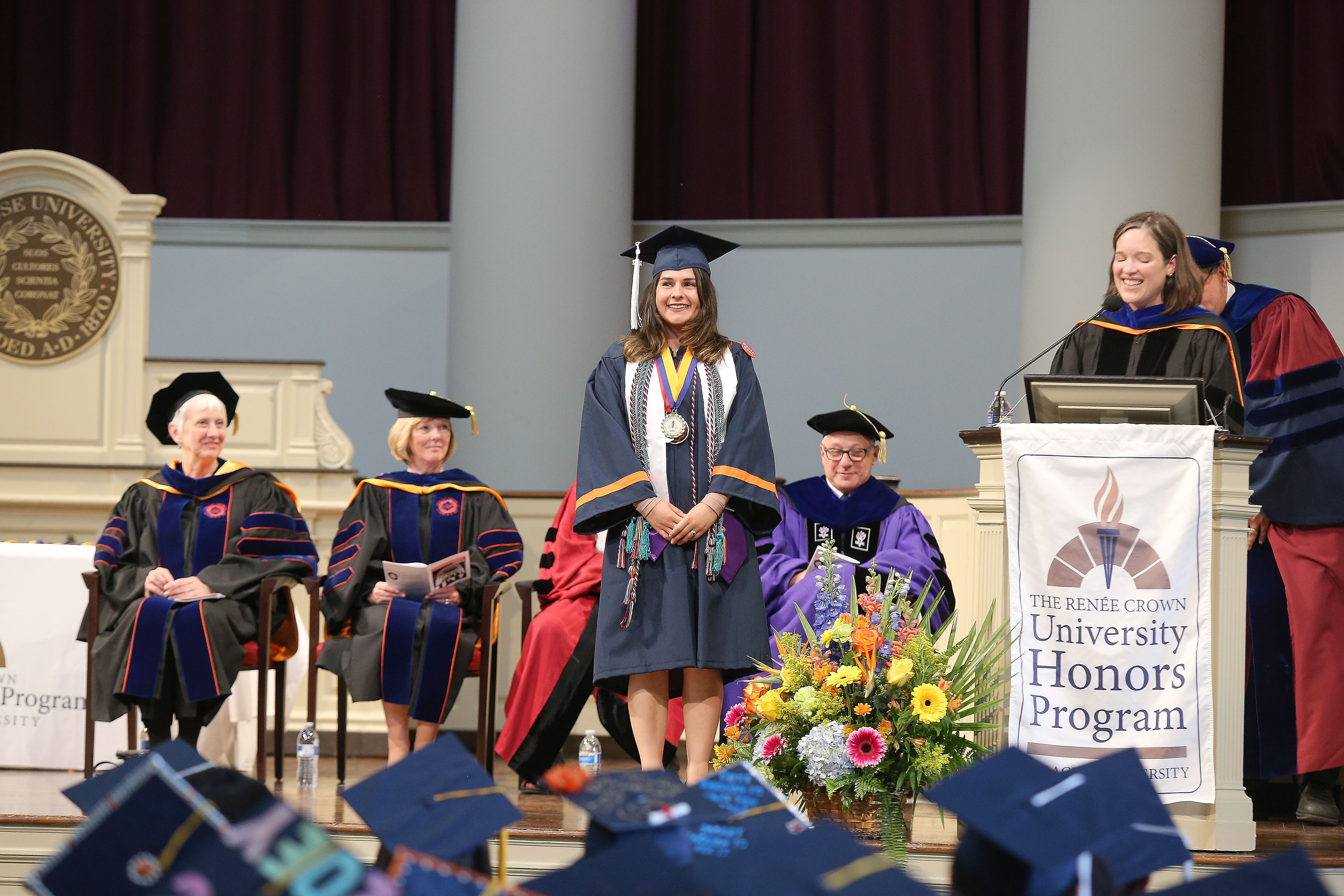 Alexis Rinck ’17 was awarded the Civic Engagement Career Achievement Award during the honors program’s convocation in May in Hendricks Chapel.

Alexis Rinck ’17 (political science and sociology, Maxwell School and College of Arts and Sciences) was awarded the Civic Engagement Career Achievement Award. She was selected for the award for her work in civic engagement, beginning as an intern with the New York Public Interest Research Group at Syracuse University her freshman year. During her sophomore year, Rinck started a Democracy Matters chapter and organized three events: Mindful Music, Prison Industrial Complex and a dirty money environmental panel.

Rinck, a Remembrance Scholar, went on to organize Jammin’ for Justice, a social justice-themed concert that had over 200 attendees, during her junior year. Committee members noted that she has been a mentor and inspiration to many on campus during her years here. Her work in civic engagement and activism has led her to pursue a master’s in public administration focusing on social welfare policy at the University of Washington.

“This award means the world to me. Coming to Syracuse University all the way from San Francisco, I was eager to find my place,” Rinck says. “I struggled at first, like so many, but became deeply involved with activism in NYPIRG, which launched me into starting my own chapter of Democracy Matters on campus. Following the election of Donald Trump, me and an amazing group of feminists and comrades organized together to put together the Sanctuary Campus Walkout, the Rally for Refugees, and the Women’s Strike Rally.

“It’s amazing to have the work I have done be recognized, but I did not do it to be recognized. To me, civic engagement was not a requirement or a means for recognition, but rather a lifestyle,” Rinck says “As an activist and organizer, your life is all about civic engagement, whether you realize it or not. To win this award sends a message to activists; the work we do is real and it matters.”

Those who received honorable mentions are the following:

Farrell Brenner ’17, a University Scholar, Remembrance Scholar and Coronat Scholar, (women’s and gender studies and citizenship and civic engagement, College of Arts and Sciences and the Maxwell School), “The Aryan- and Polish-Passing Women and Girl Couriers of the Jewish Resistance Movements in Nazi-Occupied Poland,” Advisor: Associate Professor Carol Fadda-Conrey

Faculty members say students always appreciate the award recognition, but the students often note how the greatest reward was in the challenging process to get there

“Many students speak about the life their projects will have beyond the Honors Program; they have built a foundation for future work,” Schell says. “These students are also inspired, motivated and guided by dedicated faculty mentors who have invested hours in reading drafts and guiding the work.”