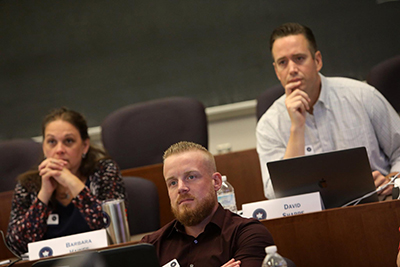 Participants listen to a presentation at this week’s Entrepreneurship Bootcamp for Veterans with Disabilities. (Photo by Gerard H. Gaskin)

Veterans from across the nation and beyond are currently on campus for the 11th annual Entrepreneurship Bootcamp for Veterans with Disabilities (EBV)—a nine-day intensive on starting and building a business, powered by the Institute for Veterans and Military Families (IVMF). This year’s 28 participants come from nine states and Japan, and represent all five branches of the military. They are spending the week attending classes, networking events and presentations, learning the fundamentals of running a business from over 30 accomplished entrepreneurs and professors.

Participants have the opportunity to connect with several guest speakers, including:

Haynie founded EBV in 2007 with the Martin J. Whitman School of Management. Since then, EBV has expanded to a consortium of 10 schools across the country and has graduated over 1,400 aspiring entrepreneurs. Of those 1,400, 72 percent have gone on to start their own business and 92 percent of those are still in business. In total, EBV graduates have generated over $288 million through their ventures. Learn more at ebv.vets.syr.edu.