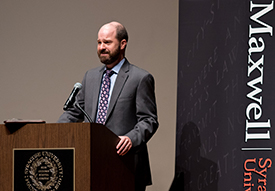 Leonard M. Lopoo, professor of public administration and international affairs and director of the Maxwell School’s Center for Policy Research, is the 2017 recipient of the Birkhead-Burkhead Teaching Excellence Award and Professorship. His selection was announced at the 2017 Department of Public Administration and International Affairs (PAIA) convocation on June 30.

The Birkhead-Burkhead Award and Professorship is an annual award that recognizes outstanding teaching in PAIA. Recipients of the award are nominated by current students in the department and selected by a committee comprised of former award winners. Honorees hold the professorship for four years and offer the faculty address at the PAIA convocation in the year following their selection.

The award honors two former Maxwell School PAIA professors: Guthrie Birkhead and Jesse Burkhead. Guthrie Birkhead was a faculty member in the PAIA and Political Science Departments from 1950 until his death in 2013. He was dean of the Maxwell School from 1977 until 1988, and he served as director of the Metropolitan Studies Program (now part of Maxwell’s Center for Policy Research). Jesse Burkhead was a faculty member in the Department of Economics from 1949 until his death in 1996. An expert on public budgeting, he retired as Maxwell Professor of Economics.  In 1956, he authored the highly acclaimed book “Government Budgeting.”

Professor Lopoo has been a member of the Maxwell faculty since 2003. His research primarily involves the family and explores issues surrounding fertility, marriage, maternal employment and social welfare policies designed to assist low-income populations. He recently co-founded the Maxwell X Lab, which utilizes social science and behavioral economics to analyze and improve policy and program outcomes. In partnership with public and nonprofit organizations, X Lab researchers conduct randomized field experiments in order to test which policies and programs are successful, and which are not.

Professor Lopoo is also a prolific scholar. He has been published in numerous academic journals, including Demography, Journal of Health Economics, Journal of Human Resources, Journal of Marriage and the Family, and Journal of Public Economics. He is currently the social policy co-editor of the Journal of Policy Analysis and Management, a post he has held since 2008.

Lynne Adrine, director of the D.C. Graduate Program and adjunct professor of broadcast and digital journalism in the Newhouse School, wrote an op-ed for Syracuse.com titled “After Capitol breach, it will be even harder to protest in Washington.” Adrine has…

‘When FOIA Goes to Court: 20 Years of Freedom of Information Act Litigation by News Organizations and Reporters’

In 2020, news organizations and individual reporters filed 122 different Freedom of Information Act (FOIA) lawsuits to compel disclosure of federal government records. A new report by the FOIA Project, which aims to provide the public with timely and complete…

‘Why Every Company Needs To Share Its Mission in 2021’

Jim Olson, professor of practice of public relations in the Newhouse School, wrote an op-ed for Fast Company titled “Why every company needs to share its mission in 2021.” Olson had an extensive 25-year career in corporate communications, working for some…

The U.S. Capitol descended into chaos on Jan. 6 as pro-Trump demonstrations and protests turned into violent riots. Peaceful protest is protected under the First Amendment, but where do today’s events stand? Roy Gutterman is an expert on communications law,…

‘Lloyd Austin Can Lead—As a Civilian’

Sean O’Keefe, University Professor in the Maxwell School and the Howard G. and S. Louise Phanstiel Chair of Strategic Management and Leadership, wrote an op-ed for The Hill titled “Lloyd Austin can lead—as a civilian.” O’Keefe has served in a…