Urban Video Project, a program of Light Work, has announced “UVP Summer Review 2017: Interzones.” Through early September, UVP will feature all of the works exhibited during their 2016-2017 program year, which explore liminal states, haunted places and the space in-between. 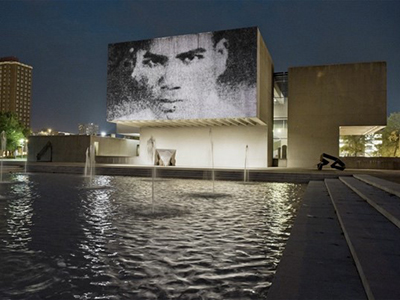 This is a great opportunity for locals who missed one of this year’s exhibitions or tourists visiting the area to enjoy a truly unique experience of sound and image at UVP’s one-of-a-kind outdoor architectural projection venue.

The full schedule for the review and descriptions of featured works can be found below. All exhibitions will run Thursday through Saturday from dusk to 11 p.m., except on nights that are part of the Everson Summer Film under the Stars film screening schedule.  UVP exhibitions are projected onto the north façade of the Everson Museum of Art and can be viewed from the Onondaga County community plaza, adjacent to the Everson Museum of Art, 401 Harrison St., Syracuse, N.Y.

“Fireworks (Archives)” is an installation-based short-form work by acclaimed Thai filmmaker Apichatpong Weerasethakul. This piece acts as a counterpoint and pendant to Apichatpong’s latest feature film, “Cemetery of Splendor.” “Fireworks (Archives)” is an abstract and graphically striking exploration of one of the feature film’s key locations, the Sala Keoku sculpture park. In this hallucinatory setting, peopled by concrete animals and gods, the two primary actors of “Cemetery of Splendor” appear amid the disorienting flash of fireworks, come together for a moment, and disappear again. For the artist, the site is a manifest revolt in the face of political oppression from the central Thai government, which has driven the inhabitants to “dream beyond” mundane realities.

For her ongoing project “Tide and Current Taxi,” artist Marie Lorenz explores New York Harbor and beyond, taking participants in a rowboat built from salvaged materials to disused coastlines and inaccessible islands, and experiencing the urban environment from the rare perspective of the water. Along the way, she often collects trash that becomes material for her artwork in various media, as well as documenting her journey through social media.

“Erie2NYC” is new video work created during Lorenz’s journey along the Erie Canal from Buffalo down the Hudson River to Manhattan, undertaken in the summer of 2016 as part of a dual commission by the Everson Museum of Art and Light Work.

“Haunted Ethnography: new experimental documentary” is a group exhibition showcasing several recent videos and experimental film works by emerging artists exploring the rich but problematic genre of ethnographic documentary as a locus of aesthetic and conceptual innovation in the medium. In this selection of works, the boundary between the ethnographic and the auto-ethnographic blurs, and the traditional ethnographic “encounter with the other” becomes troubled, twinned, dislocated, haunted. The exhibition features “Project Gasbuggy” by Carl Elsaesser, “Jaaji Approx.” by Sky Hopinka and “Toré” by João Vieira Torres.

Shot on location and featuring a hypnotic score, Deborah Startman’s “Xenoi” scans the horizon of modern-day Greece, a landscape at once timeless and jarringly contemporary. Ancient ruins and azure waters give way to the skeletons of office buildings abandoned before completion, their bare concrete columns oddly reminiscent of the Grecian temples that stand as symbols of Western Civilization.