Alumnus Plans to ‘Race Across America’ 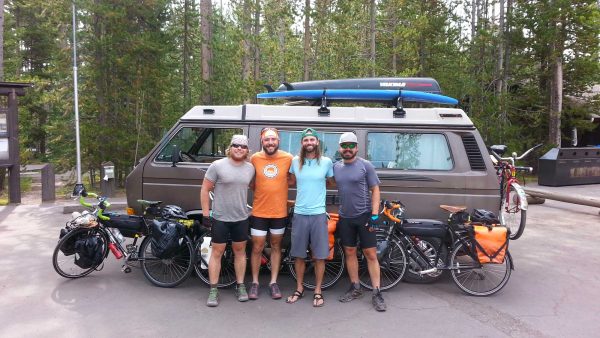 Over the course of seven to eight days, Syracuse University alumnus Ryan Jean ’09 and three teammates will race across those 3,000 miles on bicycles as part of a relay team competing in the Race Across America, one of the longest-running endurance sports events in the world.

The four riders will have their endurance tested while pedaling across rolling hills, splendid plains and treacherous mountains.

Also on the journey—riding in a van with four wheels instead of on a bike with two—are a pair of videographers with ties to Syracuse University, who will document the progress of a separate team of cyclists during the 35th annual race.

Luke Rafferty ’16, who recently worked as a filmmaker documenting Hillary Clinton’s presidential campaign, will be filming the race live along with rising SU senior Bryan Cereijo ’18.

Every individual and relay team is tasked with raising money and awareness for a charity of their choosing. Jean’s team pledged to raise $50,000 for brain cancer research through 3000 Miles to a Cure, a nonprofit organization.

“We are total outsiders to this race,” says Jean, who studied chemical engineering in the College of Engineering and Computer Science. “Though we are taking this deadly serious, we are not going to be setting any course records. What we are going to do is have the most fun out there.”

Rafferty and Jean met during the 2016 Race Across America, and Rafferty and Cereijo were friends at Syracuse University and have partnered on a number of multimedia projects, including taking a trip to Cuba.

During last year’s Race Across America, Rafferty and Cereijo were tasked with capturing the cross-country journey of a pair of cyclists. For this year’s race, they plan to utilize Facebook Live to broadcast the race while compiling highlight videos and capturing photos of the riders on their trek across America.

“This race is such an amazing event, and pushes people to the true limits of exhaustion and fatigue, while they fight for something so much larger for themselves,” says Rafferty, who earned his bachelor’s degree in photojournalism from the Newhouse School.

“As members of the media crew, we’re privileged to watch the crews and racers make unparalleled sacrifices, while using our art, and voices, to amplify their actions and create change—together,” he says.

Rafferty and Cereijo will be following the adventures of team “Cruzbike,” the second four-person relay team attempting the arduous trip across the country in support of 3000 Miles to a Cure. The riders have a nine-person crew team by their side for the duration of the trip. The volunteer crew members play an important role—shopping for groceries, cooking meals, doing laundry and maintaining their bicycles and vans on the journey east.

Unlike other endurance cycling competitions such as the Tour de France, Race Across America is both longer (3,000 miles compared to 2,262 in the Tour de France) and more demanding—once the race clock starts, it does not stop until riders cross the finish line.

Cyclists must work collaboratively on the cross-country journey, as there are no rest days and riders are constantly in motion. Riders will cross through 12 states, pass through 88 counties and have their endurance tested by three of America’s major mountain ranges—the Sierra Nevada, the Rocky Mountains and the Appalachians.

For Jean, the idea of crisscrossing the country on a bicycle was an absurd notion, until he embarked on a nine-month bike tour around the U.S. in 2016.

After six months of the same daily routine—riding for a few hours, breaking for lunch and riding all afternoon before setting up camp for the night—Jean decided to change up his ritual and push himself to see how far and for how long he could ride at one time.

Jean quickly discovered he loved the challenge of pushing his body to the limit.

Soon, he was cycling all day and into the night—building up stamina and an appetite for a cross-country bike trek.

Jean participated in Race Across America as a crew member for 2016 before committing to the 2017 race as a competitor. As part of their pre-race conditioning, Jean and Clemens spent two months training in Chile and Argentina, riding on heavier bicycles meant to boost their endurance while preparing their legs for the grueling Race Across America.

When they returned to the United States, they focused on shorter, more explosive riding, and Jean is confident that all their training will pay off during this cross-country cycling test.

“We are so excited to be able to have this experience together while raising desperately needed funding for brain cancer research,” he says.

The passion and dedication of Jean, Rafferty and Cereijo caught the attention of Lucia Parker, the director of marketing for 3000 Miles to a Cure.

“Ryan, Luke and Bryan are some of the most amazing humans I’ve encountered in this effort, and we get to work with some real heroes,” Parker says. “We’ve been so fortunate to work with their amazing efforts.”

Thanks to a GPS beacon signal that will live track their progress across the country, fans can follow Jean and his team’s journey here: www.raceacrossamerica.org/phone/live-tracking.html using race number T-400.

Those interested in joining Jean’s team as a donor can contribute to brain cancer research here: https://3000milestoacure.com/event/2017-raam-4dudes/