In the early 1960s, the Ford Motor Co. wanted to design and develop a new car that would revolutionize the auto industry. In the midst of the failed expectations of Ford’s Edsel automobile, and the success of Italian auto manufacturer Ferrari, pressure on Ford’s designers was intense. 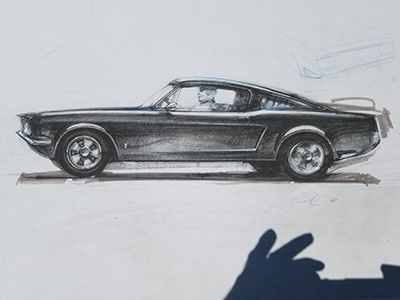 A sketch of the original Ford Mustang

Jerome Malinowski, professor emeritus of design in the College of Visual and Performing Arts (VPA), was just a couple of years out of the Cleveland Institute of Art. In 1961, as a new employee in the pre-production Thunderbird studio at Ford, he was one of the designers charged with creating a car design that would capture what the consumer wanted and needed. After several months of work, the team unveiled the final design for the Ford Mustang.

The car was introduced to America on April 17, 1964, at the New York World’s Fair, and has enjoyed iconic status in America over the past 50 plus years. Malinowski will speak about his experiences as part of the design team on Saturday, June 17, at 11:30 a.m. at the Cazenovia Public Library, 100 Albany St. The talk, sponsored by the Mohican Model A Ford Club, is free and open to the public.

Malinowski, an award-winning designer who was a professor in VPA from 1967-98, remembers well both the excitement and the anticipation surrounding the design of the Mustang. The team started its work with the basic design of the Ford Falcon, an economy car that had a proven record of reliability. They added a V-8 engine, which gave the car power and “muscle,” bucket seats, a four-speed transmission on the floor and a console. This model was called the 1963 1/2 Falcon Sprint, which sold 15,000 units. This layout would set the stage for the 1964 1/2 Mustang, meant to appeal to young families with children and older adults.

As a member of a six-person team, Malinowski studied other cars to determine what worked and what did not. He experimented with long hood and short rear and side scoops and roof designs. And he created the Mustang’s iconic racing stripes, the first road car to have them.

The first experimental Mustang 1 made its debut in 1962 at the United States Grand Prix in nearby Watkins Glen, N.Y., driven by Formula One race drive Dan Gurney.

On the day the Mustang became available in April 1964, 24,000 of the cars were sold. “It was a great feeling,” says Malinowski. “Even then, we still had no idea of the impact it would have.” More than 1.6 million Mustangs were sold from 1965 through 1967. It became the first in a class of vehicles known as “pony cars” and inspired the design of other brands such as the Chevrolet Camaro and Pontiac Firebird.

When he joined the VPA faculty in 1967, Malinowski brought his Ford experiences with him. In the classroom, he worked to develop his students’ design skills while preparing them for the challenging demands they would face in industry. “You have to perform,” he says. “It’s lots of work but lots of reward. The company was in dire straits and we helped to bring it back.”

In 2014, Malinowski was invited to the Saratoga Automobile Museum as part of the Mustang’s 50th anniversary celebration. There, he reflected on his experience—in a nondigital world—in designing the iconic car that has stood the test of time.

America’s love affair with Ford Mustang continues today. The 2018 car, part of the sixth generation of Mustangs to roll off the production line, is scheduled to be introduced in the coming months.

Automobiles aren’t the only vehicles that have been influenced by Malinowski’s design expertise. While watching the 1984 Winter Olympic Games, he says he was embarrassed by the rudimentary bobsled used by the United States team. “I told myself, ‘I think I can help these guys,’” he remembers.

Malinowski offered his services as a designer and went to work on improving the body shape and aerodynamics of the sled. As a sled technician, he was a member of the U.S. Olympic team for the 1988 Winter Olympic Games in Calgary, where in one run the U.S. team was outperformed by the team from the Soviet Union by a mere .02 seconds. Despite the the loss of a medal, Malinowski feels vindicated—his sled was tested by Boeing against Russian, Swiss and German gold medal sleds, and found to be the most aerodynamic sled in the world.