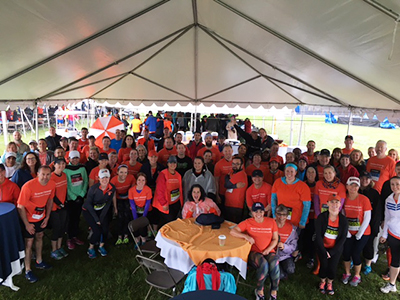 In 2014, participants in Syracuse’s J.P. Morgan Corporate Challenge battled 90-degree heat. Last year, they fought a 21 mile-per-hour wind on the 1.75 mile stretch to the finish line.

Therefore, Sascha Scott did not mind this year’s wet and cool weather for the 35th running of the race in Syracuse. The conditions were far better than they were in those previous years, she said.

Scott, associate professor and graduate director in the Department of Art and Music Histories in the College of Arts and Sciences, was the top overall female finisher in this year’s race, held June 6 on Onondaga Lake Parkway. She finished the 3.5 mile course in a time of 20:31 (at a 5:52 pace). Mike Bott, a functional business analyst in the Office of Financial Aid and Scholarship Programs, was the top Syracuse University male finisher with a time of 18:46 and seventh male finisher overall (he was the University’s top male finisher and 12th overall in 2016).

Scott, along with Miranda Blechman, research analyst with OIRA, Neal Coffey, studio manager in the S.I. Newhouse School of Public Communications; and Kevin Wall, analyst in the Office of the Registrar, will compete in the J.P. Morgan Corporate Challenge Championship in Frankfurt, Germany Tuesday, June 13.

They were among 160 University faculty, staff and students who registered for this year’s Syracuse race. The total field included 8,244 runners and walkers from 307 Central New York companies. Syracuse University ranked fifth in the number of registrants this year. John Beecher, budget manager in the School of Education, and Lori Levengood in the Office of Government and Community Relations, coordinated the Syracuse University team.

The beneficiary of this year’s Syracuse race is Huntington Family Centers, which will use the donation to provide free, full-day summer camp opportunities for youth in Syracuse’s Near West Side.

“Syracuse University has a long legacy of participation in the Corporate Challenge mixed with a strong commitment to employee wellness,” says Beecher. “These factors coupled with great support from the University, led to large participation numbers, even for a campus that slows down a little in the summer.”

Beecher says the Corporate Challenge always fosters much anticipation among University employees. “Employees across all areas of the University rally together to build our team,” he says. “A lot of positive personal experiences certainly lead to returning participants, and to new participants that have heard about the event as well.”

The Corporate Challenge is marking its 40th anniversary. The first race was held on July 13, 1977, in Central Park in New York City, with 200 runners from 50 companies participating. Syracuse joined the field in 1982. It event now takes place in 13 cities in seven countries on five continents.

Scott was the first-place female finisher in both 2014 and 2016. She missed the race in 2015 to attend a ceremony at which her twin sister, a U.S. Air Force lieutenant colonel, took command of the U.S. Air Force’s 326th Training Squadron.

“The Corporate Challenge is truly a unique race. First, because the number of people doing it is so large in comparison to most local races. But second, and more importantly for me, because it is a rare time when my personal passion for running intersects with a job I love,” says Scott. “It is truly rewarding to get to run with such a large number of people from the SU community, from the ‘Noontime runners’ who I frequently run with to many people from around the University who I’ve never met before.”