Although she didn’t know it at the time, Susan DeMar ’02 began preparing for her career at New Mexico State University (NMSU) more than 15 years ago, while enrolled at Syracuse University. 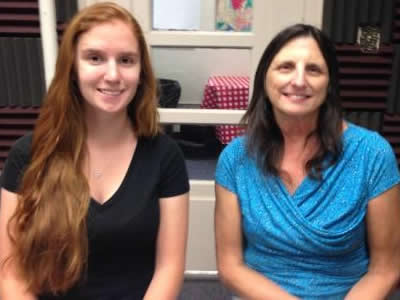 Back then, DeMar was raising three kids and working full time in Syracuse’s advancement division. She also was chipping away at a bachelor’s degree in psychology in the College of Arts and Sciences, where most of her classmates were 10-15 years younger.

“I had a lot of eyes on me,” jokes DeMar, speaking by phone from her office at NMSU in Las Cruces, where she is an administrative assistant in the Department of Geography. “I guess some of the people in my classes looked up to me because I was older or had a job. Maybe they thought what I was doing was cool.”

If DeMar’s liberal arts education has taught her anything, it is how to navigate myriad assignments and collaborations. Such training has come in handy at NMSU where, in addition to working in one of the state’s top applied geography departments, she is a tireless crusader for women and underrepresented minorities in the science, technology, engineering and math (STEM) fields.

Hard work pays off. In April, DeMar received the NMSU 2017 Community Engagement Staff Award for serving as advisor of the American Association of University Women (AAUW)’s affiliate campus organization and as president of the NMSU Women’s Club. The distinction comes on the heels of her receipt of the Stephen W. and Robert E. Roberts Memorial Staff Award for dedicated service to NMSU.

“New Mexico State is very different from Syracuse, academically and culturally,” says DeMar, also a board member of the AAUW-Las Cruces branch. “For starters, we’re one of the state’s largest public universities. Because we are a federally recognized [U.S.-Mexico] border institution, we have a big Hispanic population. Many of our students come from poor family backgrounds, attending schools with inferior resources. Nevertheless, they are some of the hardest workers I’ve ever seen.”

DeMar applauds NMSU’s racial, ethnic and geographic diversity, citing it as one of the reasons she came to campus in 2004. (“I saw a job opening online, and got a phone interview,” she says. “They offered me a position, sight unseen.”) Moreover, NMSU’s balance of male and female students, far above the national average, affords her opportunities to break down educational and economic silos. 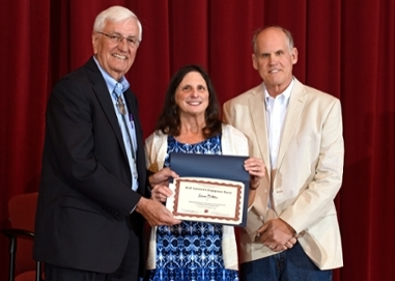 Witness DeMar’s involvement with AAUW, a 136-year-old organization that advances equity for women and girls through advocacy, education and research. Her club at NMSU works closely with AAUW-Las Cruces on various events and activities, such as a series of recent workshops about navigating job offers and promotion opportunities, as part of the AAUW Start Smart and AAUW Work Smart programs.

“Participants learned about the gender pay gap [which is 20 percent, in favor of men], how to market their skills and experience, how to determine a fair target salary and how to properly respond to salary offers,” DeMar says. “It’s information they can use the rest of their lives, well beyond their next salary negotiation.”

Other AAUW events she has organized at NMSU include GIRLS CAN! and Tech Trek. GIRLS CAN! is a daylong conference, designed to encourage teens to continue their education and to help them achieve their long-term goals. Tech Trek is a weeklong summer camp, where girls, in DeMar’s words, are “immersed in a world that empowers and encourages them to think about themselves as future scientists, engineers, mathematicians and computer specialists.”

“AAUW is focused on helping these young girls with their leadership skills and [with promoting their] education, so they know how to ask for what they’re worth when they go out in the job market,” she said.

Later in the interview, DeMar pointed out that recognizing stereotypes, biases and cultural beliefs is the first step toward achieving gender equality. Areas in which women are seriously underrepresented, she added, are engineering, computer science and physics.

“Understanding the factors that affect women from diverse backgrounds from progressing in historically male-dominated fields will help them get ahead,” says DeMar, alluding to factors such as marital status, racial and ethnic background, and childcare obligations. “We [in higher education] need to be more responsive to student diversity and personal circumstances.”

Raised in Fulton, N.Y., near Lake Ontario, DeMar was the first woman in her family to attend college. It was while working at Syracuse that she considered moving from the Snow Belt to the Sun Belt—not an easy decision, given her ties to campus. 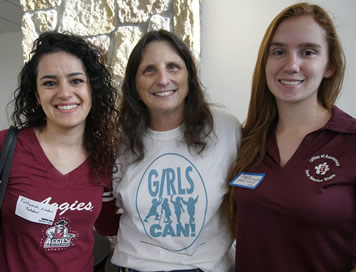 DeMar at GIRLS CAN! with Fattaneh Naderi-Behdani (far left), a Ph.D. candidate in chemical engineering at NMSU, and Greenamyer, a geography major.

“I loved my classes, particularly physics and English, and really enjoyed the people I worked with,” says DeMar, who, by then, also was a budding short story writer. “We had just appointed a new chancellor [Nancy Cantor], and were ramping up for our biggest capital campaign to date. It was an exciting time.”

Alan Lincoln, retired senior director of corporate relations, was one of DeMar’s supervisors. He remembers her being a “positive, encouraging and very dedicated” employee. “Susan has a personality that makes it hard to say ‘no’ to her,” he says. “She was a valuable player of our team and a genuinely kind lady. It’s no surprise that New Mexico State is honoring her for her accomplishments.”

No sooner had DeMar set foot in sun-drenched Las Cruces, with its arid climate, rugged landscape and magical desert vistas, than she embraced her new surroundings. (“New Mexico State has an outdoor pool that is open year round. We can go swimming in January,” she exclaims.) A chance encounter with a member of AAUW-Las Cruces inspired her to join its board and then launch an affiliate club at NMSU. That DeMar’s own daughters experienced sexism while majoring in electrical engineering in college has lent a personal edge to her work.

Shirley Armstrong is co-president of AAUW-Las Cruces, the oldest and largest branch of its kind in the state. “Susan has been instrumental in helping us achieve our long-time goal of starting an AAUW student-affiliate group on the NMSU campus,” Armstrong says. “She is a delight to work with, is an effective board member and has a fantastic relationship with her students.”
NMSU’s first AAUW meeting drew 10 people; the second, 20. Now in its third year, turnout is often 50-60. One participant is Martha Mitchell, professor of chemical and materials engineering. “The local AAUW branch wanted to have a student affiliate club for many years, but it took Susan’s determination and connection with the students to actually make it happen,” she says.

Students and colleagues alike praise DeMar for her welcoming demeanor and willingness to let students drop by her office for a study break or cup of coffee. One person puts it this way: “Susan has had a concrete and substantial impact on my life. She’s awesome. I hope you appreciate her.” 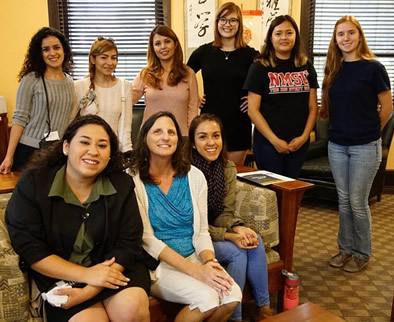 DeMar with some of NMSU’s AAUW club members.

Although DeMar plans to retire in 2019, she shows no signs of slowing down. Her immediate goal is to become a Start Smart salary-negotiation workshop facilitator. (AAUW has more than 700 of them, serving over 240 colleges and universities in 45 states.) Dorrie Sieburg, AAUW’s salary-negotiation program manager, thinks DeMar has what it takes to become a good facilitator. “I can’t thank Susan enough for the great support she has given [AAUW] and for her wonderful outreach,” she says.

Adds Paige Robnett, AAUW’s college and university relations manager: “We are so excited to work with her.”

DeMar also plans to remain active with the NMSU Women’s Club, promoting educational and social activities, and pursuing special service projects that enrich the community. DeMar is particularly proud of the Ruth Mary Webber Scholarship, which she established at the club two years ago, in memory of her mother.

“I like to keep busy,” concludes DeMar, who also enjoys hiking, gardening and singing in the Mesilla Valley Chorale. “My ultimate goal is to start an AAUW club at Syracuse University. That would be like coming full circle.”