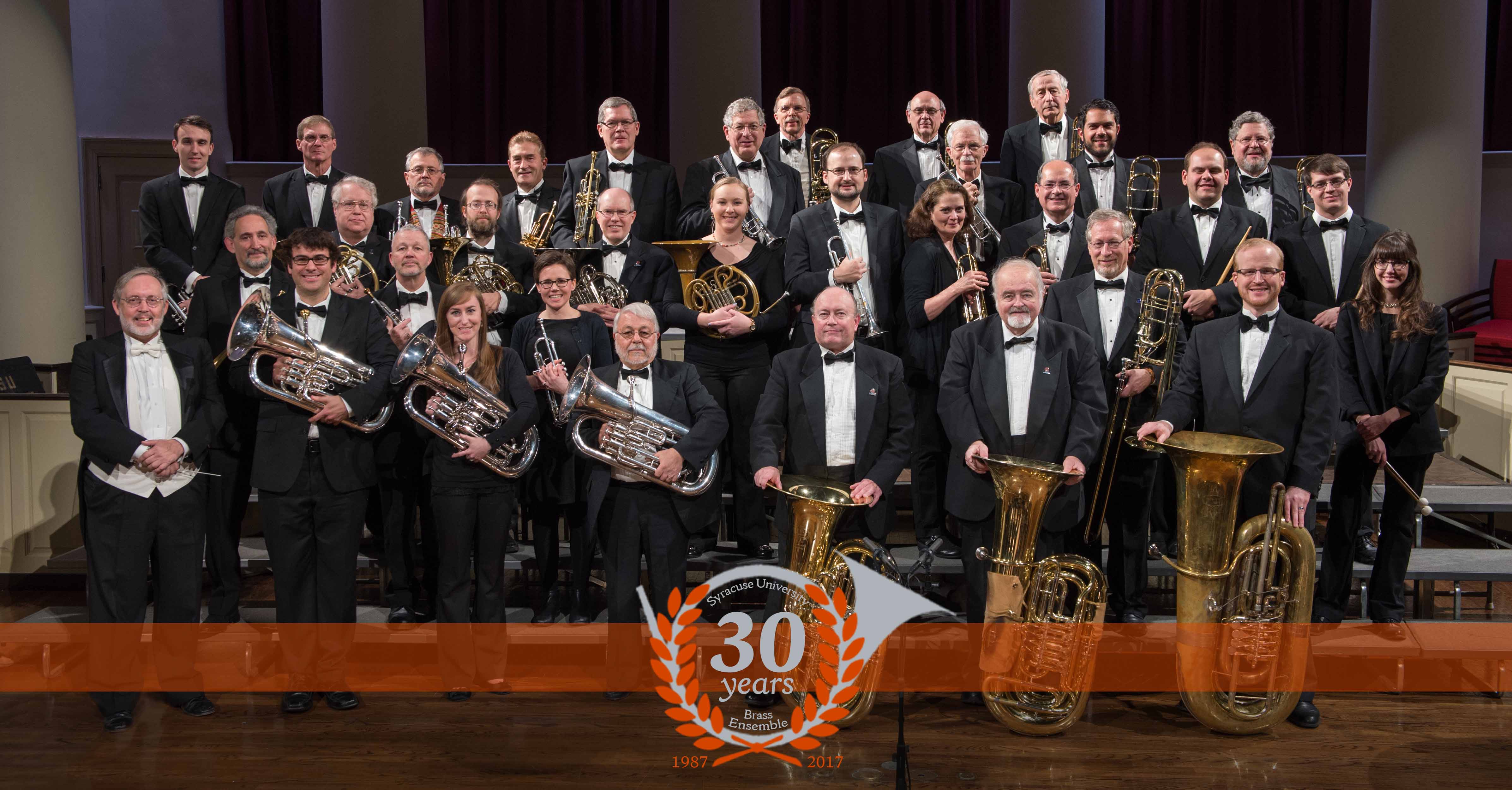 Syracuse University Brass Ensemble at the 2016 “Holidays at Hendricks” concert.

The 35-member Syracuse University Brass Ensemble (SUBE) is one of 14 groups from six states invited to perform June 8-10 at the 2017 Gettysburg Brass Band Festival in Gettysburg, Pennsylvania. The SUBE Euphonium Ensemble has also been invited to give a recital during the festival.

“It’s an honor to be invited to share the stage with so many prestigious national award-winning bands,” says SUBE Director James T. Spencer, professor of chemistry in the College of Arts and Sciences, as well as a Laura J. and L. Douglas Meredith Professor and founding executive director of the Forensic and National Security Sciences Institute. “We also expect to connect with the many, many SU alums in the area who we’ve heard will be coming to the performance. It’s an exciting time to hear and present some wonderful music and meet other musicians and alumni from across the nation.”

The SUBE presents about 20 performances annually, including the very popular “Holidays at Hendricks” concert presented each December with the Hendricks Chapel Choir and broadcast on WCNY-TV and WCNY-FM throughout New York state and southern Canada. The highly accomplished group has also released six CDs and eight DVDs, and has twice placed first nationally in the Open Division of the North American Brass Band Association Championship Festival.

For the annual Gettysburg Brass Band Festival—now in its 20th year—the ensemble will perform seven selections in a 45- to 50-minute recital on Saturday, June 10, at 3 p.m. on the festival main stage at the Gettysburg Lutheran Seminary campus. Following are the pieces, with commentary by Spencer:

“Horizons”: a relatively new piece by Paul Lovatt Cooper, whom Spencer calls a rising star in the brass band world. “It’s an exciting opener that features a modern version of various brass choirs from within the band, answering each other in antiphonal style.”

“Turandot Third Act”: “The beautiful music of Gicacomo Puccini from the opera features one of the most famous solos (the aria “Nessun Dorma”) and concludes with the jubilant ending to the opera.”

“Blades of Toledo”: “A Spanish-style overture to celebrate the famous swords produced in Toledo, Spain, and featuring the trombone section.”

“James Bond 007”: “One of the most iconic film series in history; this arrangement features many of the best-known themes from the series.”

“Invincible Eagle”: “One of John Philip Sousa’s greatest, although lesser known, marches was written for the 1901 Pan-American Exhibition in Buffalo.”

Other pieces to be presented include “Thor, the Dark World” and “Disney on Parade.”

Members of the full SUBE attending Gettysburg are:

Vedyun Mishra G’21, a graduate student in the School of Architecture, has been selected for Metropolis Magazine’s Future100, an elite group of architecture and interior architecture students from the U.S. and Canada. The inaugural award recognizes the top 100 graduating…

When Syracuse University students finish up the fall semester and travel home for Winterlude, they may be left missing the sense of community and intellectual nourishment they get from classes and their friends. To provide students with a unique learning…

The Department of Drama in the College of Visual and Performing Arts introduced its acting and musical theater Class of 2021 today, April 12, via a new website: SyracuseShowcase.com. The website offers a digital version of the department’s annual Lewis…

The John Simon Guggenheim Foundation has announced that Stephen Kuusisto, University Professor in the School of Education and director of interdisciplinary programs and outreach at the Burton Blatt Institute in the College of Law, has been awarded a 2021 Guggenheim…

Light Work presents Meryl Meisler: “Best of Times, Worst of Times,” an exhibition of her photography of her life in and around New York City in the 1970s and 1980s.  Meisler’s exhibition will be on view in the Kathleen O. Ellis Gallery…