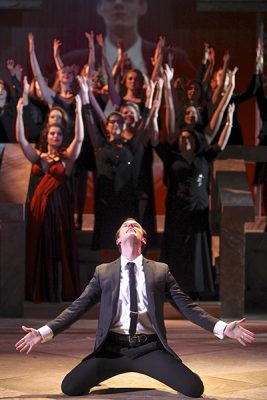 The Hollywood Reporter (THR) has ranked the College of Visual and Performing Arts’ Department of Drama among the top five schools for undergraduate study in its May 24 issue.

The department was ranked no. 4, jumping four spots from its no. 8 ranking last year. The department has moved steadily up THR’s annual rankings since 2012.

“The department’s rise from the top 20 to the top five in just five years is a tribute to the sustained excellence of its faculty and staff and to the hard work of students in all our programs of study,” says Ralph Zito, professor and chair.

The article cited the ability for students to earn Equity points during their education, thanks to the department’s affiliation with Syracuse Stage, an outstanding Equity theater company located in the same theater complex. THR also listed four of the department’s successful alumni: Taye Diggs ’93, Vera Farmiga ’95, Frank Langella ’59 and Vanessa Williams ’85.

“We take great pride in the accomplishments of all of our alumni,” says Zito. “In addition to the established names mentioned in the article, rising stars such as Patti Murin ’02, Josh Young ’03, Clarence Derwent Award winner Will Pullen ’13, Tony Award-winner Jessie Mueller ’05 and countless other graduates too numerous to mention continue to distinguish themselves in all areas of the entertainment industry.”