From the songbook of the Man in Black himself comes the musical adaptation “Ring of Fire: The Music of Johnny Cash.” Performed by a multi-talented cast of 10, the show features 38 Cash classics, including “I Walk the Line,” “A Boy Named Sue” and “Folsom Prison Blues.” This lively musical about love and faith, struggle and success, and rowdiness and redemption opens at Syracuse Stage on Friday, June 9, in the Archbold Theatre at the Syracuse Stage/SU Drama Complex, 820 E. Genesee St., Syracuse. Preview performances are June 7 and 8.

“Ring of Fire: The Music of Johnny Cash” is an addition to the 2016/2017 Syracuse Stage season. Stage Artistic Director 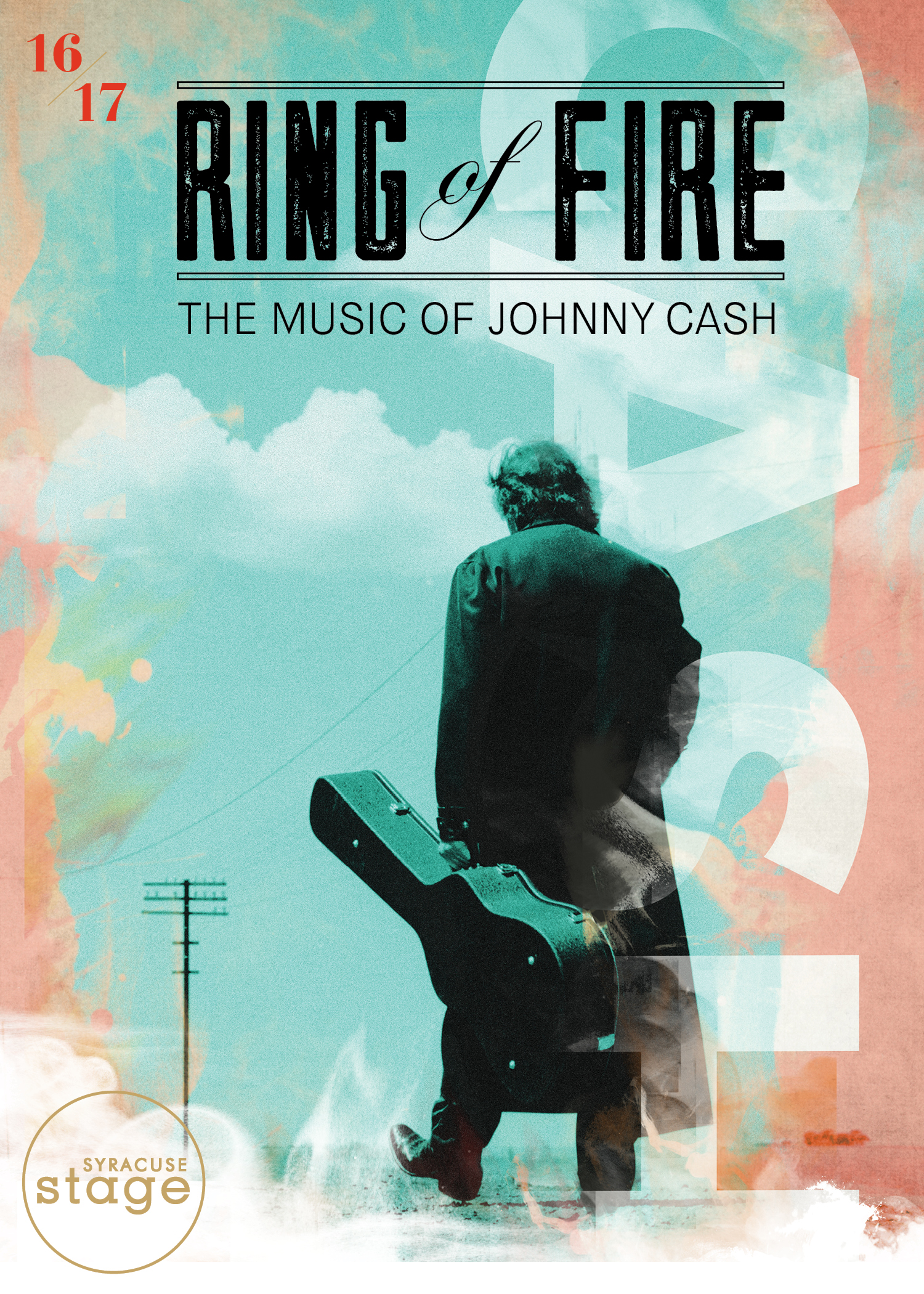 Robert Hupp’s interest in “Ring of Fire” stems from his experience working on its revival at the Arkansas Repertory Theatre. He’s seen the show multiple times and has since come to understand the value of Cash’s music. Hupp believes the broad range of Cash’s musical talents is what makes “Ring of Fire” appealing to all ages.

“He’s not defined by one era of music the way some popular musicians are,” Hupp says. “He’s transcended any particular era and has broad appeal because his music was authentic and true to who he was.”

“Ring of Fire” has been performed at venues around the country. From New York to Chicago, Arizona to Indiana, audiences and critics alike have praised the show.

“A wild and burning performance concert with a first-class cast that does its best when it is kicking up its heels and delivering every song with gusto,” BroadwayWorld.com reported.

“After seeing an extremely talented ensemble perform ‘Ring of Fire,’ I’m reconsidering my musical tastes. This Cash is worth your cash,” said Northwest Herald’s Paul Lockwood. “This is truly an ensemble piece, with each performer getting a moment in the spotlight on well-known Johnny and June hits. The cast deserves to have a packed house for every performance.”

“Ring of Fire” is built on Cash’s great songs interspersed with transitional scenes inspired by his life, including episodes from his childhood and his relationship with June Carter Cash. The versatile performers in the cast play an array of instruments, covering harmonicas, fiddles, guitars, mandolins and drums. This range of instruments reflects Cash’s ability to span music genres and to influence great artists like Bob Dylan and Bruce Springsteen. Even pop stars such as Justin Timberlake and Pharrell Williams hold Cash’s music in high regard.

“There’s a depth to his artistry, from his country roots to the man he became,” says Jill Anderson, managing director of Syracuse Stage. “He’s a lion in our culture with appeal that extends beyond the music alone.”

Created by Richard Maltby Jr., conceived by William Meade and directed by Rand Myler (originally directed by Jason Edwards), “Ring of Fire” paints a musical portrait of the Man in Black that will entertain and inspire theatergoers from all backgrounds.

“Taken together, Johnny Cash’s songs seem to tell an almost mythic story of America,” said Maltby in a statement in Playbill. “That’s what we’re attempting to put on stage. I think the humility, the humor, the sexiness, the emotional depth will be a revelation to most theater audiences.”