School of Information Studies (iSchool) Professor Emerita Antje Bultmann Lemke passed away on May 15. She was 98 years old. 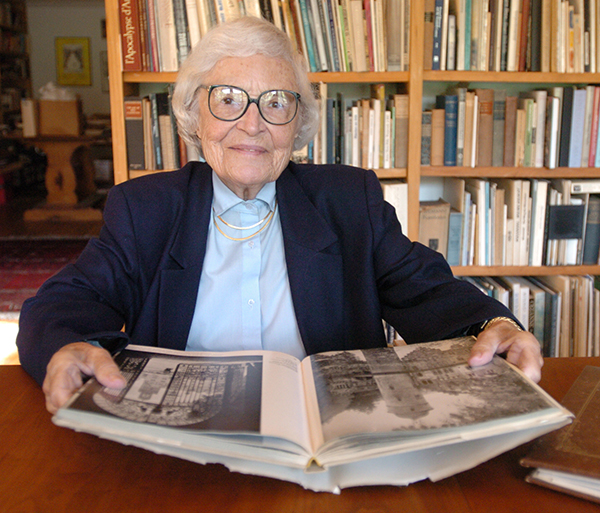 Born in Breslau, Germany, in 1918, Lemke was the daughter of Helene and Rudolf Bultmann. Her father was one of the most influential theologians of the 20th century.

Lemke originally had dreams of becoming a doctor, but abandoned them as admission to medical school in Germany in the 1930s required membership in the Nazi party. She went to school and trained to become a librarian, as the profession was one of the few at the time not to require party membership. She graduated with a degree in Library Science from the University of Leipzig.

In her early twenties, Lemke used the library to help hide those fleeing Nazi persecution. She also served as a courier in the German Resistance and delivered papers and documents that enabled the freedom and safety of many people, jeopardizing her own safety and life in the process.

Lemke was officially named a Righteous Gentile in 1998 by the Temple Society of Concord, and honored as one who risked her life to save Jewish lives during the Hitler years.

At the end of World War II, Lemke found herself in East Germany, under Russian control, and was forced into work at the Zeiss Optical Factory. She escaped by being crated into a wooden box, marked for delivery as a telescope to West Berlin.

In post-war West Germany, in coordination with the American League of Women Voters, Lemke founded the journal “Informationen fur die Frau.” It is impossible to know how many thousands of women benefited from this journal’s missions of achieving equal status of women in society; safeguarding democracy; international understanding; and international solidarity.

Lemke moved to the United States in the late 1940s. While visiting Syracuse in 1952, she was hired as Syracuse University’s art and music librarian.  She earned a master of library science degree from the iSchool (then the School of Library Science) at Syracuse University in 1954. When she volunteered to cover classes for a fellow librarian, her teaching career was born and thrived until her retirement from Syracuse in 1986.

In the years from 1952 to 1986, over 15,000 students had the opportunity to learn from Lemke. Whether she was teaching courses like the History of the Book, Bibliography of the Humanities or Reference; whether she was overseeing a lecture class of 80 students, or a graduate seminar of six; whether she was tutoring or teaching at Syracuse University programs in Germany or Puerto Rico, or on campus, Lemke held to the notion that teaching is sharing information, not imposing it. And generations of students gratefully shared with her, continuing on to rewarding and important careers.

In addition to her long career as a librarian and teacher, Lemke worked for many years to ensure the preservation and documentation of the works of theologian, philosopher and physician Albert Schweitzer.

Lemke’s father was a friend and admirer of Schweitzer, and Lemke translated into English two of Schweitzer’s books: “Out of My Life and Thought: An Autobiography” and “The Albert Schweitzer-Helene Bresslau Letters, 1902-1912.”

In 1973 Lemke met Erica Anderson, creator of the 1959 Oscar-winning documentary “The Life and Times of Albert Schweitzer.” The two became friends, and Lemke became involved in Anderson’s work with the Albert Schweitzer Friendship House (ASFH), eventually serving as president of its Board of Directors for ten years.

The Antje Bultmann Lemke Seminar Room, located in Syracuse University’s Special Collections Research Center, was named for her in 2008. A conference room in Hinds Hall also bears her name.

Lemke learned at a young age to play the violin and to appreciate the importance of music in public life. In the 1950’s, Lemke worked to help establish the Syracuse Friends of Chamber Music. She was also a violinist in the Syracuse Symphony Orchestra, which she helped to establish in 1961.

When Lemke retired from teaching, a scholarship was established in her name at the iSchool. The Antje Lemke Book Award is awarded every year at the iSchool’s Convocation ceremony in May, to a graduate student in the Library and Information Science program who exhibits a passion for learning and a dedication to service.

Lemke announced her retirement from teaching in 1985, and taught her last class at the iSchool in the spring semester of 1986. In her resignation letter, she wrote: “I am especially grateful for having had the opportunity to convey to the next generation what I consider essential in our lives: the seriousness and joy of intellectual pursuit, and the responsibility to act with reason and compassion.”

Calling hours for Lemke will take place on Monday, May 22, at the Eaton-Tubbs Chapel in Fayetteville, New York, from 4 – 7 p.m. with a moment of sharing, reflection and music starting at 6:30 p.m.  The chapel is located at 7191 East Genesee Street in Fayetteville.

A celebration of Lemke’s life is being planned for late summer/early fall.

Alumni and friends who wish to share their recollections of Antje and her teachings can do so on a page established by the iSchool: ischool.syr.edu/antje.

In lieu of flowers, gifts can be made to the Antje Lemke Scholarship and Book Award fund at the iSchool.