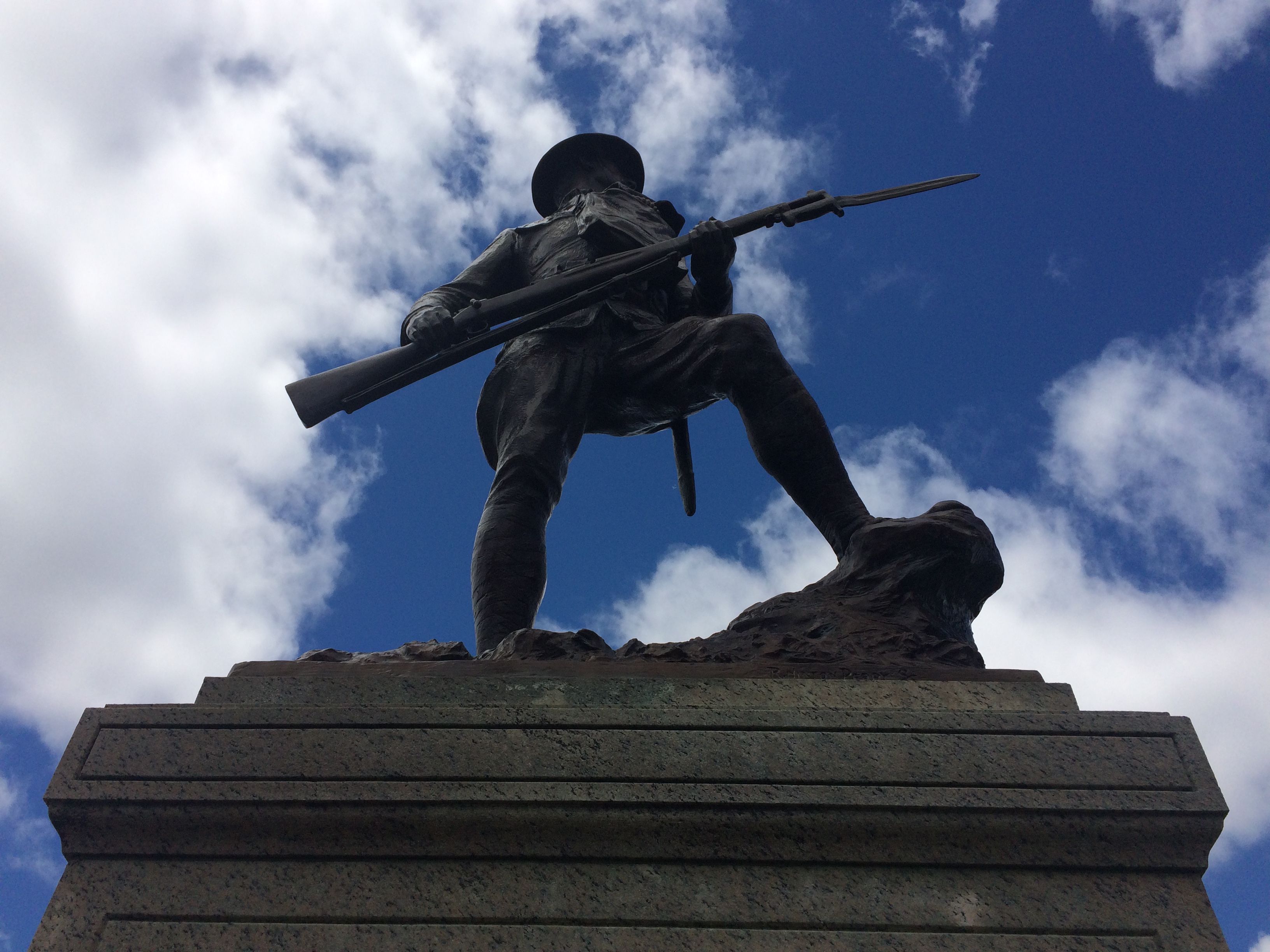 Bill Orzell understands the promise. It is reinforced for him by the sheer power of a statue in Billings Park in downtown Syracuse, across the street from the abandoned grandeur of the old Central High School. The statue portrays an American soldier in World War I, bayonet at the ready as he prepares for combat, a gas mask slung around his neck.

“What it really shows you,” says Orzell, who is studying geography at University College, “is just how awful the whole thing really was.”

The sculpture was unveiled nearly a century ago. Tens of thousands of people jammed the streets of downtown Syracuse for a parade before the dedication; at least 25,000 packed in around the park for the event itself. The Syracuse Post-Standard described it as one of the most unforgettable ceremonies in the city’s history.

Mayor Harry H. Farmer stood before the great crowd and made this promise:

“We of Syracuse accept this trust,” he said. “We shall never be forgetful of the honor it confers upon us. We will cherish it and guard it as we would the graves of the heroic men whose names make up a magnificent roll of surpassing honor.”

The hard truth is that Farmer’s vow disappeared into history. Few today recall the meaning of the statue. One massive bronze plate is missing from the monument. There is no evidence around it of any lingering sense of reverence. Rarely do you even see a flower at its base.

Yet, as Orzell appreciates, it is a direct statement on a pivotal moment that helped to win the war, erected by survivors of that battle. That legacy becomes especially powerful in these weeks before Memorial Day.

The statue was dedicated in memory of the dead from the 38th Infantry Regiment. The sculptor, Roland Hinton Perry, had a national reputation: Before his death in 1941, his work included two memorable statues at Gettysburg and the elaborate Court of Neptune fountain at the Library of Congress in Washington, D.C. 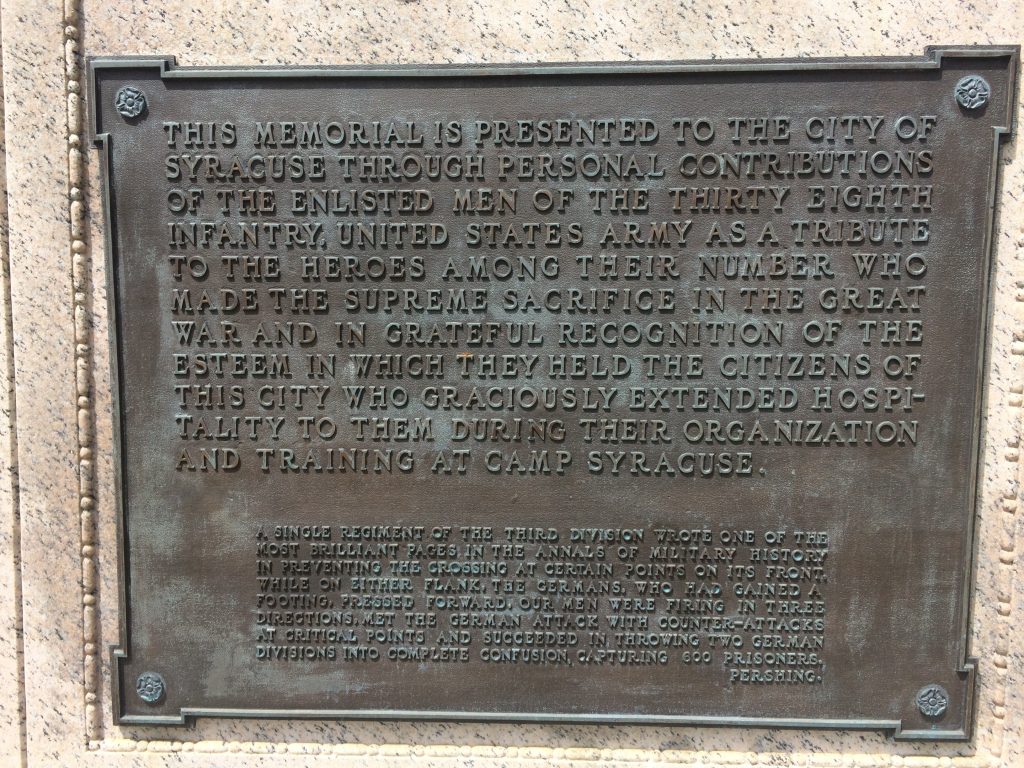 The main plaque that describes the purpose of the monument, with a quote from Gen. John J. Pershing, the American commander.

In Syracuse, he carved his name into the base of the statue, directly beneath a sculpted stone on which the soldier firmly plants his foot. That instant is a symbol of purpose and courage that provides the sculpture with its name:

The Rock of the Marne.

A century ago, soldiers with the 38th organized at the State Fairgrounds near Syracuse. They trained there before they left for Europe, where they played a key role in the second Battle of the Marne. A quote on the statue, from Gen. John J. Pershing—commander of American forces during the war—describes the magnitude of their accomplishment: “A single regiment of the Third Division wrote one of the most brilliant pages in the annals of military history,” Pershing recalled, speaking of how the 38th paid a steep price to prevent a German crossing at several key points along the Marne, a river in France.

By logic, history and emotion, it is one of the most significant World War I monuments in the nation. According to accounts of the time, the 38th regiment began the battle with 3,600 men, and 1,142—almost one-third—were killed or wounded. Grieving afterward for all they lost, the surviving soldiers decided to raise the money for a monument.

They could have put the statue anywhere. They discussed such locations as Arlington National Cemetery, near Washington, D.C.

Instead, they decided on Syracuse, a place where they’d built powerful friendships, a place they remembered with devotion and affection. It was an unusually intimate and meaningful gesture of appreciation. On the monument itself, the soldiers offered thanks to “citizens of this city who graciously extended their hospitality.”

The community returned that trust with a huge turnout and a warm reception. Hundreds of veterans from the regiment showed up for the dedication on July 15, 1920, the second anniversary of the battle. The crowds were so thick it was difficult for those men to shoulder their way to Billings Park. 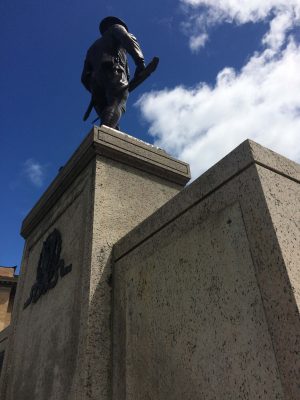 The space on the monument that held a missing panel, which included the names of many soldiers.

Over the years, that connection slowly faded. Almost a century later, the purpose of the statue is all but lost in Syracuse. Thousands of motorists drive past it each day without a second glance. The great bronze panel that honors the sacrifice of the 38th Infantry Regiment has disappeared from the base.

Yet conversations are underway about bringing the monument the civic honor it deserves. The statue itself was restored and cleaned about 10 years ago by sculptor Sharon BuMann, under contract with the city. The nearby Marriott Syracuse Downtown, the old Hotel Syracuse, has also been newly restored at a cost of roughly $70 million, a powerful statement about rebirth in that district.

Merike Treier, executive director of the Downtown Committee in Syracuse, has started early discussions with city officials about ways to beautify the park and heighten civic appreciation—including the idea of holding a major ceremony of remembrance on July 15, 2018, the centennial of the Second Battle of the Marne.

“People are interested, and we’re talking about it,” Treier says. “Once we get a better sense of the cost, we can figure out what we want to do.”

While Syracuse Mayor Stephanie Miner will no longer be in office a year from now—she will leave City Hall in about seven months, due to terms limits—she says it is critically important to recall the meaning of the statue.

“World War I was the war to end all wars but, as we have learned, it tragically did not,” Miner says, in a statement released Tuesday. “This statue is a central reminder of the enormous sacrifice so many young men made, and the sacrifices of the communities they called home. Syracuse was no stranger to that war and—as a mayor years ago said—as long as we have a city, we must remember those who gave their lives for us.”

The monument has especially intense resonance. The Second Battle of the Marne has been called the “turning of the tide” in World War I. The battle was of such historical meaning that the army’s Third Infantry Division, stationed at Fort Stewart, Georgia, still calls itself “The Rock of the Marne.”

The Germans, aware that American involvement in the war would almost certainly end what had been a long and bloody stalemate, mounted one last desperate offensive. Only 50 miles separated the battle-hardened German troops from a full-blown assault on Paris, which might have forced an entirely different conclusion to the war. As The New York Times described it in 2014, in a reflection on the war: “In their way were divisions of exhausted but experienced French and British troops, along with their new, largely untested allies from the United States.”

The German offensive failed at the Marne. The allies held their position. At the center of that effort: The 38th Infantry Regiment, credited with withstanding a withering attack from all sides and somehow taking hundreds of German prisoners.

As Michael S. Neiberg an authority on World War I, told The Times: “It is the turning point of the First World War.” 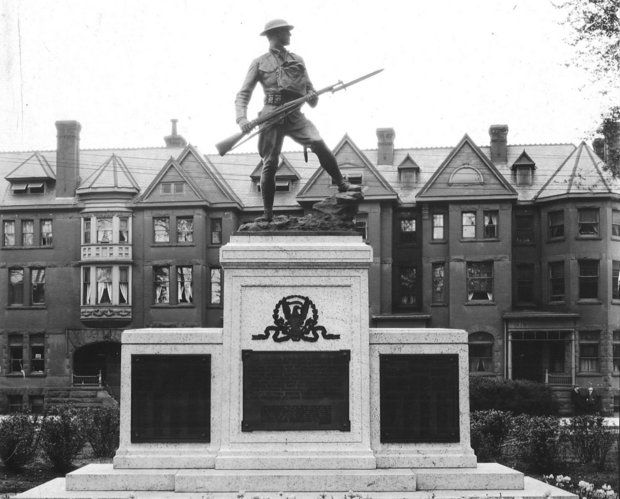 The monument as it appeared in the 1920s, when it was built. (image courtesy of Onondaga Historical Association)

Not everyone in Syracuse forgets that heritage. Orzell, the University College student, spent much of his career doing digital mapping. He is also a passionate student of Upstate history, a longtime member of the Canal Society of New York State, a guy who believes communities should understand the stories behind civic monuments.

Intrigued by the lonely power of the statue at Billings Park, Orzell researched the saga behind it. In a 2014 letter to The Post-Standard, he described how young men from throughout the nation trained in 1917 at the fairgrounds, briefly known as “Fort Syracuse.” He discovered that as a gentle form of humor, the soldiers adopted the nicknames of the farm animals that had occupied what became military barracks.

Those young men went to Europe, played a pivotal role in winning the war, then contemplated how to show their reverence for their lost friends. The statue, their highest form of tribute, was originally financed by donations from members of the regiment itself.

According to clippings at the Onondaga Historical Association—where the tale of the monument will be part of a new exhibit on World War I—the soldiers raised more than $24,000 to pay for the statue. But they lost thousands of dollars due to a harsh wartime exchange rate, leaving them far short of what they needed.

Capt. Hamilton Johnston, an assistant professor of military science and tactics with the Army ROTC at Syracuse University, served with the regiment at the Marne. Johnston went to the community for help. About 200 veterans of the battle had settled in Central New York, according to historical association documents.

They needed $8,000 to pay off the final costs of the monument. “The Syracuse Herald (a local newspaper) conducted a campaign which resulted in public-spirited citizens making up the remainder,” wrote David Wallace of the old Syracuse Herald-American, in 1946.

The sculpture was dedicated in July 1920, a monument to a courageous yet horrifying moment in time that helped shape events for the rest of the 20th century. The crowds for the ceremony were so large that people watched from nearby rooftops.

The statue was the vision of hundreds of men who grew close as they trained at the State Fairgrounds, then saw their young friends killed amid the fierce, relentless stand at the Marne.

Their one dream was that this monument in Syracuse would always honor the memory of all they lost. Over the years, in a changing city, that hope—that sense of purpose—faded away.

If all goes well, far more than stone and metal soon will be restored.